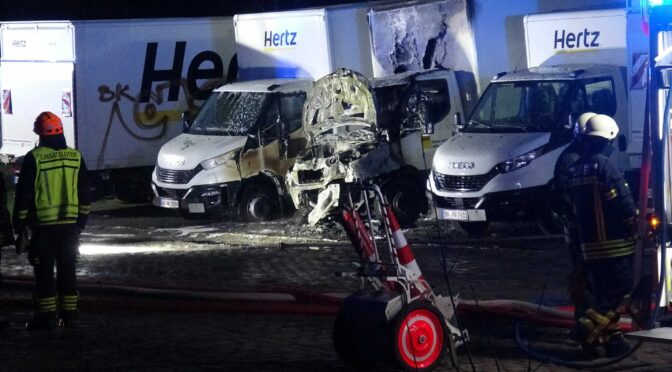 Arson Attack Against Hertz Vehicles in Solidarity with Anarchist Prisoners in Leipzig, Germany

Come on, come on, put the mask on
It’s wednesday night and I won’t be long

Gotta do my hair, put my gloves on
It’s wednesday night and I won’t be long

With this earworm in mind and inspired by the prisoners in Hamburg, in Rome and in Athens, we attacked Hertz with fire on the night of January 12. Hertz cooperates with the enemies of our freedom and must pay for it.

END_OF_DOCUMENT_TOKEN_TO_BE_REPLACED 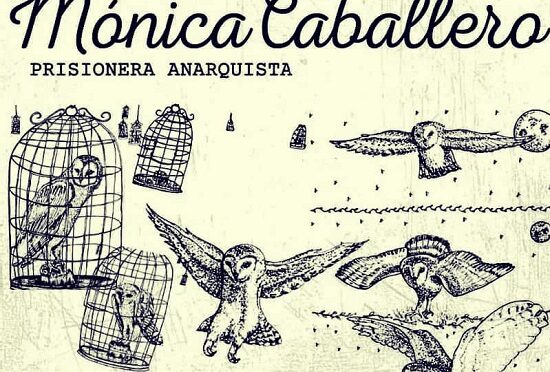 A few days ago, I received the news that the indomitable Alfredo Cospito began a hunger strike to demand his release from the 41 bis legal torture regime.

For those who do not know Alfredo Cospito, he is an anarchist comrade kidnapped by the Italian state, since 2012, for an attack against one of those responsible for the nuclear disaster in Fukushima. This action was claimed by the Olga FAI-FRI faction and Alfredo took responsibility for it.

Since this conviction, the comrade has been prosecuted in several repressive operations, such as Scripta Manet, Sybilla, which have managed to obtain convictions and have added more years to the comrade’s already long sentence.
END_OF_DOCUMENT_TOKEN_TO_BE_REPLACED 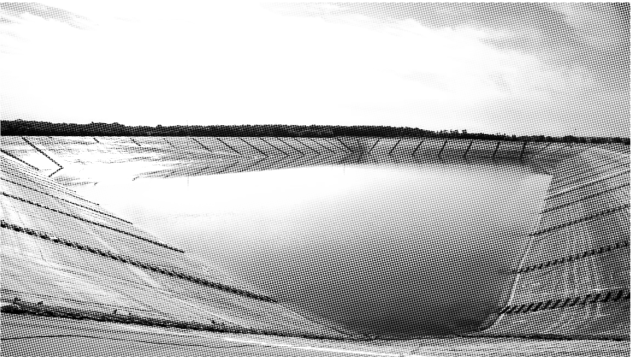 Mega-basins: how the justice system tracks down environmental activists

Two people alleged to have damaged a water reservoir in Charente-Maritime[2] are on trial this Thursday in La Rochelle. Phone bills, tailing and geolocation… To identify them, the investigators have deployed methods that are out of the ordinary. END_OF_DOCUMENT_TOKEN_TO_BE_REPLACED 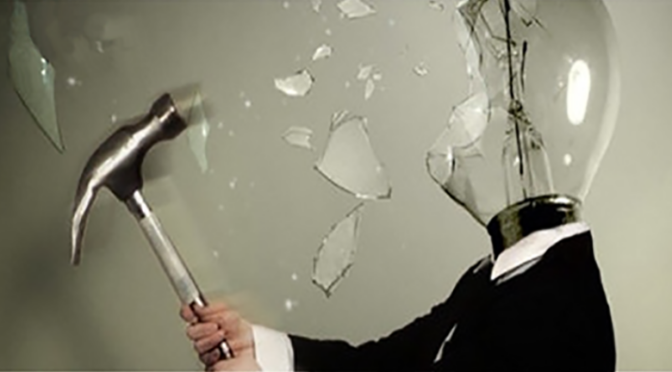 it is to you, and only you (‘wreckers’, not consensus interceptors; avowed dreamers, not pragmatists when required – militants and opportunists please refrain) that we are turning to in these dark times, when every horizon seems to be closing in on us. To you, known over the years in Italy and around the world, or even completely unknown, the only ones who can understand our current state of mind and our words.

Many argue that those who have no hope to convey should keep quiet. Although this would explain the silence into which many of us are sliding, we don’t agree. In fact, in a way we think exactly the opposite: those who should shut up are the ones who persist in peddling enchanting narratives (from heavenly paradise as a reward for earthly resignation to communism as the ineluctable outcome of capitalist development, passing through the insurrection that comes with every citizens’ mobilisation or street riot). Especially now – with humanity well on the way to extinction, a planet on the verge of ecological collapse, a social massacre that gets worse every day, a war that brandishes nuclear weapons, voluntary servitude so generalised as to make any aspiration to even the slightest freedom ridiculous – it seems to us more urgent and essential than ever to look deeply into reality and not to skim the surface of things in order to draw comforting illusions from it. That is why this letter is desperate, because it is born of discouragement in the face of a situation that in all respects appears hopeless, with no way out.

We are not hiding it. We have gambled on the encounter between thought and action, we are besieged by opinion and representation. We have invoked the Ego and its Own, we are surrounded by the Selfie and its vanity. We have tried to spread utopia, we are submerged in realism. We have loved the most excessive and singular ideas, we are at the mercy of the most homologising and massifying propaganda. We longed for the awakening of consciousness, we find ourselves trapped in the calculus of the algorithm. We have prioritised ethics, we are swept away by politics. Poetry may have survived Auschwitz (and television?), but critical thinking has been annihilated in Silicon Valley.

END_OF_DOCUMENT_TOKEN_TO_BE_REPLACED

FIRE TO THE EARTH DESTROYERS

Answering a call for retaliation against the murder of Tortuguita, we burned a large excavator in Portland yesterday night.

Tortuguita died trying to kill a cop in defense of the Weelaunee forest. Never let this be forgotten.
With these flames we honor their bravery. With smoke we send a prayer into the night that the next cop won’t be so lucky.

We attack the same machines that threaten the forest in Atlanta and everything wild.
FIRE TO THE EARTH DESTROYERS
Until every cop is dead and all they defend burnt to ashes. 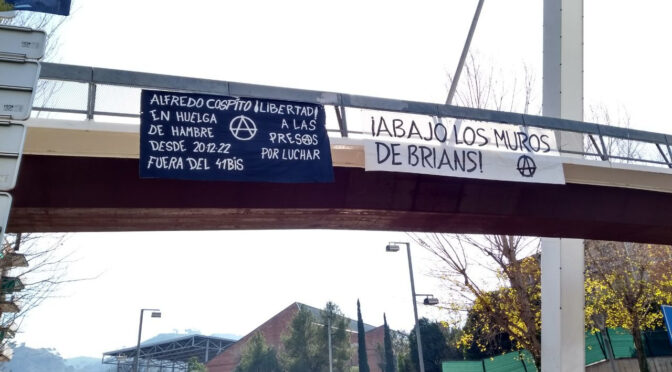 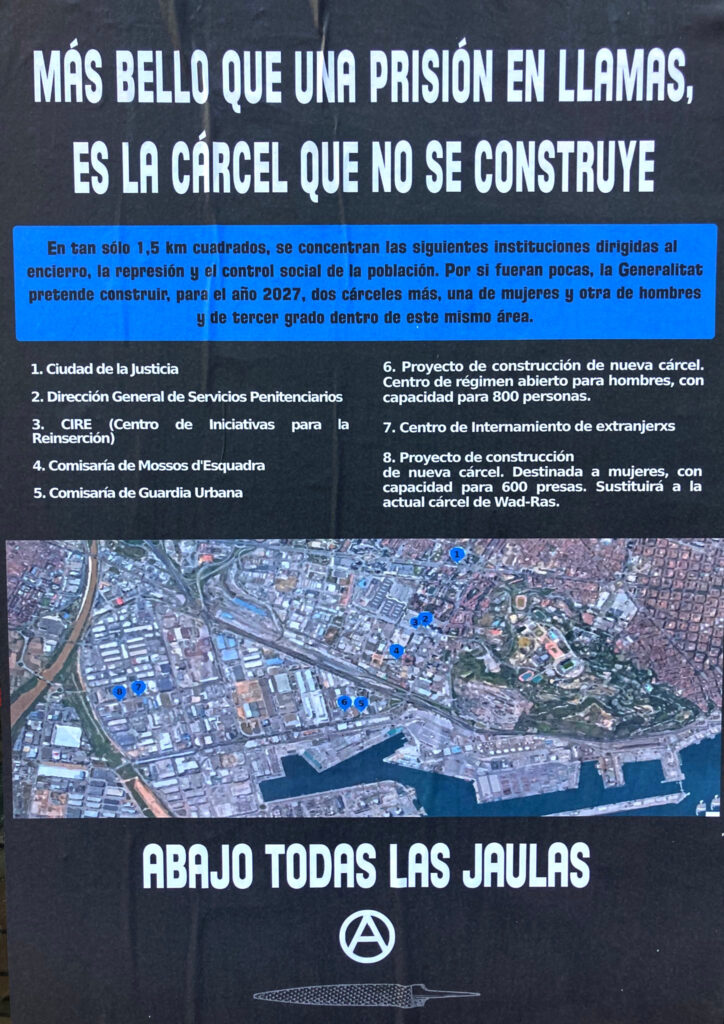 Account from some anarchists who joined from out of town last saturday:

Shouting the whole way with passion and rage, 80 of us marched for over hour out of the town of Martorell, to the two prisons of Brians in the Catalan countryside. With chants, music and fireworks, we let the people held captive know they’re not forgotten, despite all the state’s intentions to isolate them. And through the walls and layers upon layers of fences, they called and whistled back.

The Catalan government want to build two more hellholes in the Zona Franca area of Barcelona by 2027: a 800-person “open regime” men’s prison, and a 600-person women’s prison to replace the existing one of Wad-Ras. Development has been delayed after the discovery of heavy metals in the soil. The government says it wants to develop the women’s prison “from a feminist perspective, describing the plans as “gender sensitive” and supporting “female empowerment”! Here we see the inevitable endgame of leftist politics: prison societies with enhanced perceptions of freedom, built on the dying embers of social war….

ABAJO LOS MUROS DE LAS PRISIONES!
DOWN WITH EVERY STATE AND NATION!
FOR FREEDOM, FOR ANARCHY. 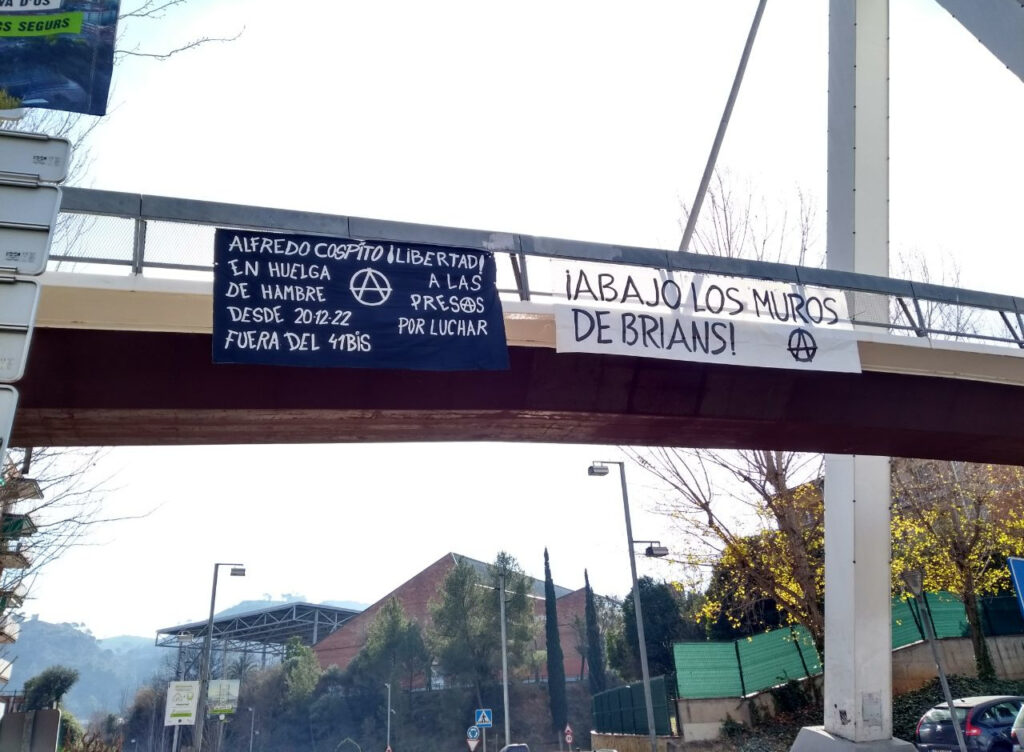 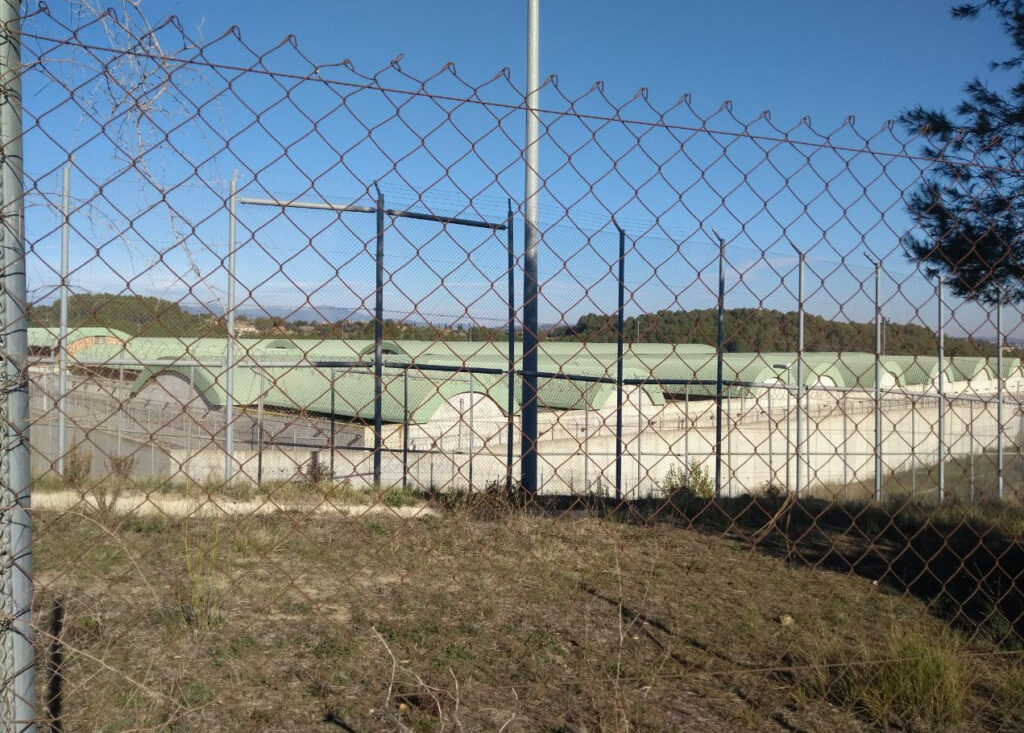 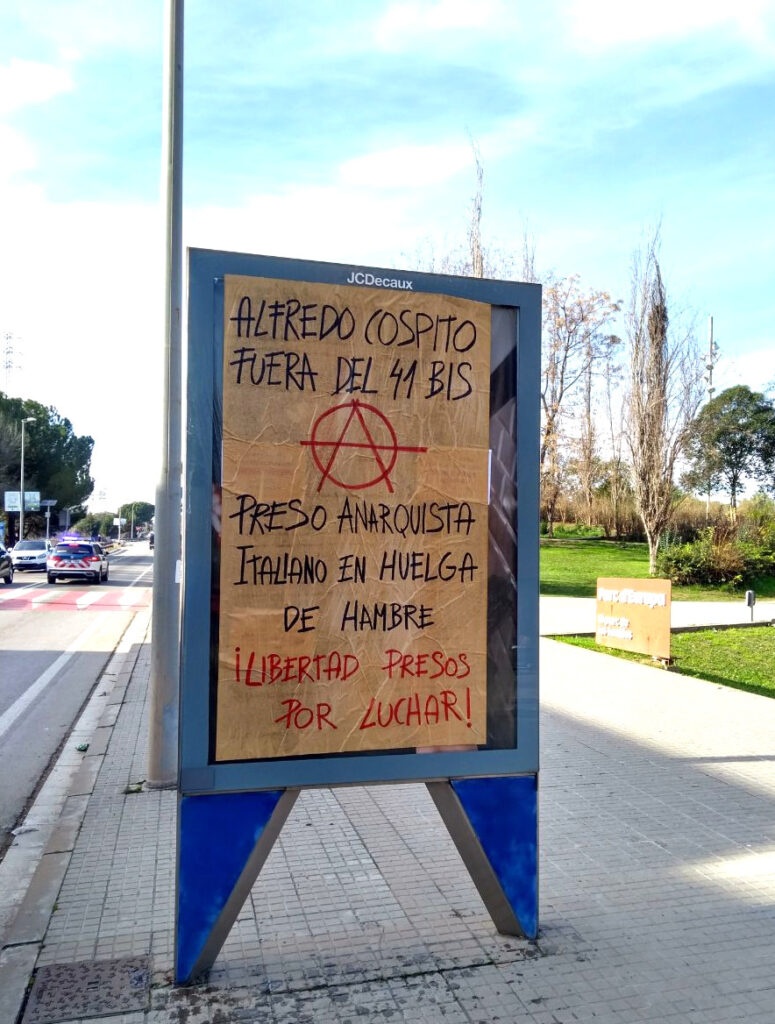 We have been told repeatedly for years now that this is ‘the age of communication’. We too are convinced of this.

This communication is based on electrified concrete pylons, repeater towers that spread turmoil and leukaemia, server towers that make whole rivers evaporate, and communication increasingly overlaps with the control and domination they allow: global security experiments such as those put into effect with the advent of the Covid-19, or the brain-shredding war propaganda machine in the war between Nato and Russia are the most recent and devastating examples.

END_OF_DOCUMENT_TOKEN_TO_BE_REPLACED

Words of comrade Marcelo Villarroel from prison. From Chile to Italy –
A loud cry of insurrectional complicity for Alfredo Cóspito!!!
Alfredo Cóspito is an anarchist comrade from Turin imprisoned since September 2012 after the kneecapping of Roberto Adinolfi (on May 7), executive director of Italian nuclear company Ansaldo Nucleare. This act claimed by the “Olga” Cell Informal Anarchist Federation / International Revolutionary Front for which he was sentenced to 10 years and 8 months. He was also sentenced to 20 years (first degree), for the explosive attack on the Carabinieri training school in Fossano (Cuneo) on June 2, 2006, claimed by Terrible Anonymous Revolt – Informal Anarchist Federation, which provoked the state response through the operation “Scripta Manent”.

Alfredo has been an anarchist comrade in active praxis for decades. Always consistent with his anti-authoritarian projectuality, he has maintained several antagonistic initiatives for which, even though he has been in prison for more than 10 years, the Italian fascist state does not forgive him.

END_OF_DOCUMENT_TOKEN_TO_BE_REPLACED 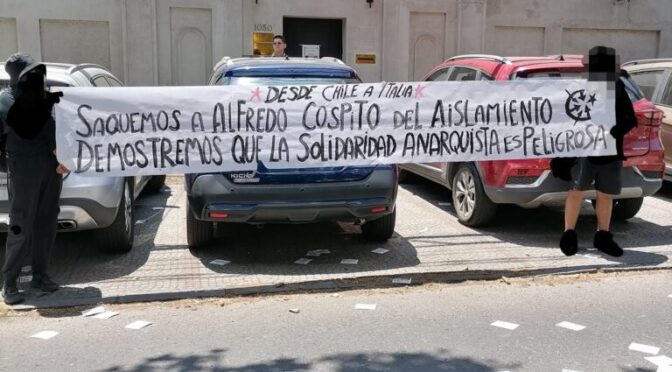 On Wednesday, November 30, a rally was held at the Italian embassy in Chile in solidarity with comrades Alfredo Cospito and Anna Beniamino, on hunger strike since October 20 and November 7, respectively.
During the rally, banners were displayed, the embassy walls were graffitied, leaflets were thrown and words of solidarity were read. The rally ended with the arrest of a comrade who was later released. 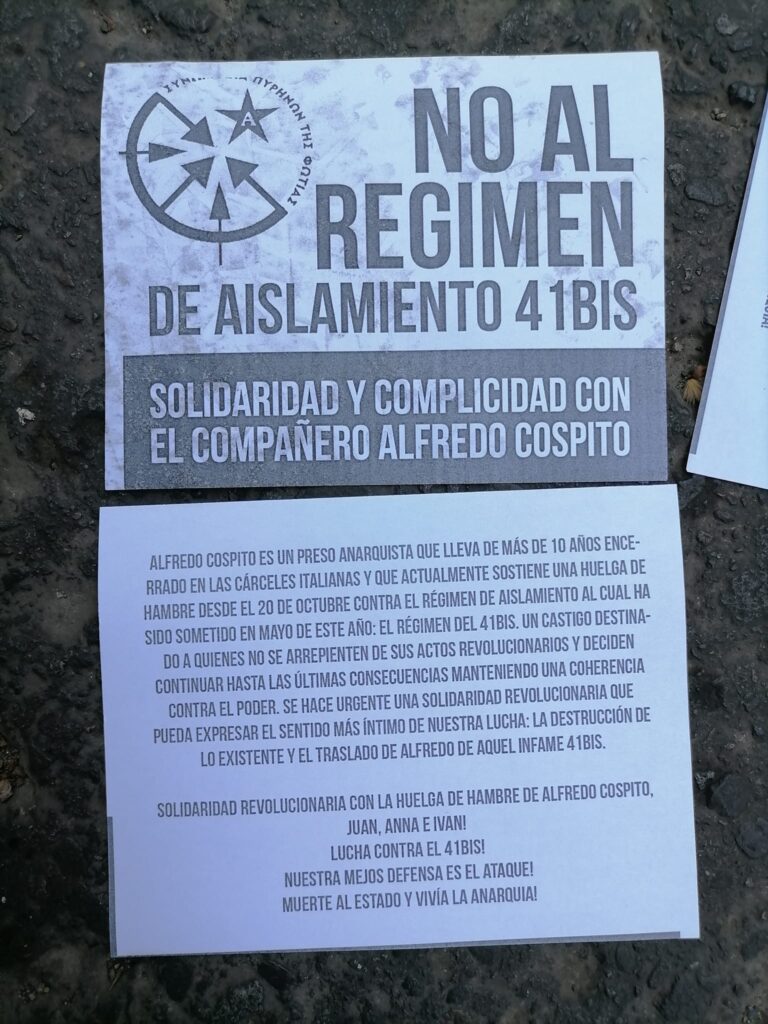 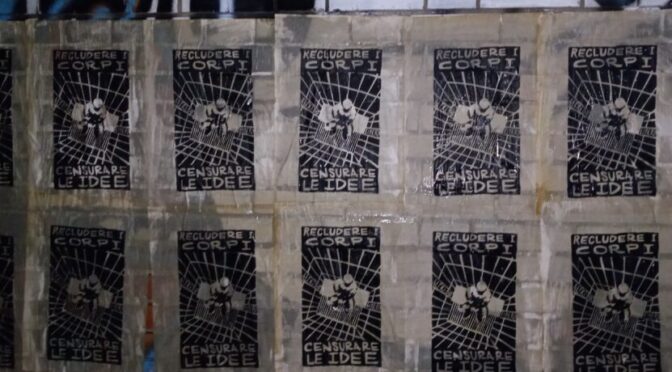 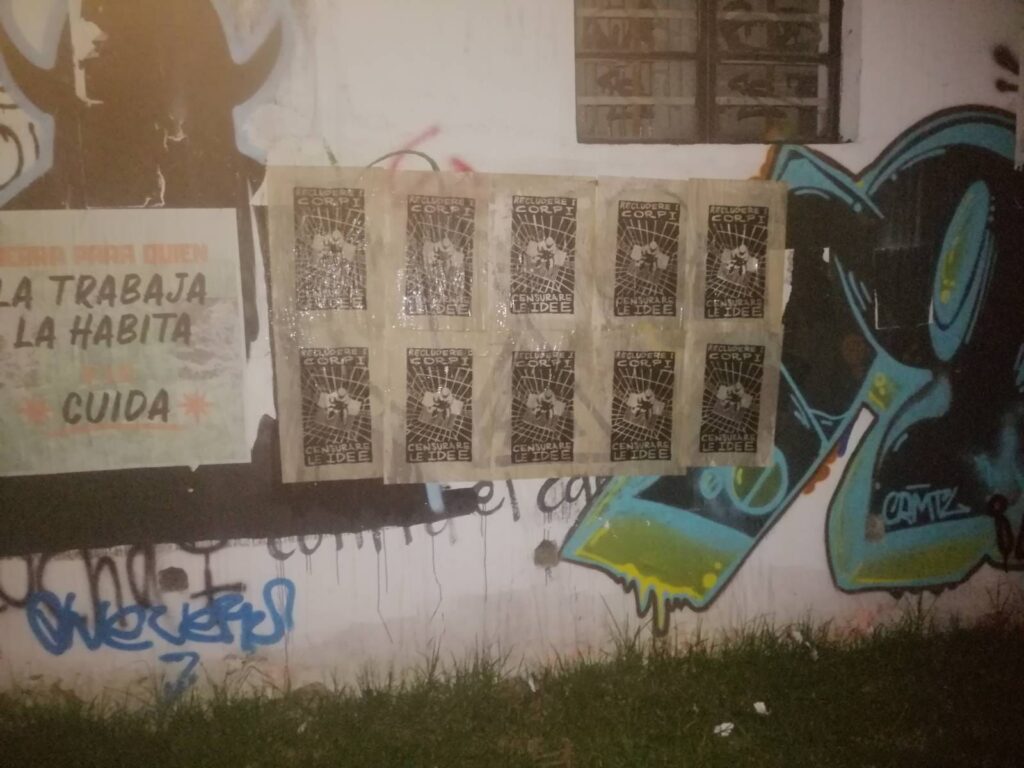 With a small (but not unimportant) gesture of complicity we show our solidarity with comrade Alfredo Cospito, kidnapped in the maximum security prison of Bancali. Demonstrating his firm conviction and fighting against this extreme measure of annihilation, he has turned his body into another trench of combat, maintaining a hunger strike since October 20 to break from the 41 Bis regime, which he has been in since May 5.

Unsurprisingly, the state and capital will try to break the fierceness and indomitable spirit of any subversive comrade, but solidarity is our greatest weapon, let’s wield it. Let’s continue to generate actions to get Alfredo out of isolation and strengthen the anti-prison struggle.
END_OF_DOCUMENT_TOKEN_TO_BE_REPLACED