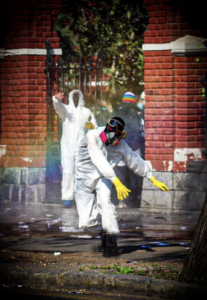 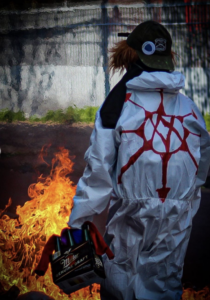 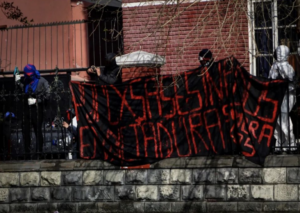 On September 12 at the Liceo de Aplicación and Manuel Barros Borgoño pamphlets and banners were thrown and barricades and confrontations were mounted against the presence of Carabineros (COP).

At the Barros Arana Boarding School (INBA) a group of students marched to the Museum of Memory and Human Rights to commemorate those murdered and disappeared 49 years after the coup d’état.

END_OF_DOCUMENT_TOKEN_TO_BE_REPLACED

Alfredo Cospito fuori dal 41-bis : Solidarity from Bure
Revolutionary solidarity is a sailboat without borders that rides the waves of the storm!

From Bure, we wish to send all our solidarity to our comrade Alfredo Cospito, who is currently in solitary confinement (called “41-bis”) in the prison of Sassari in 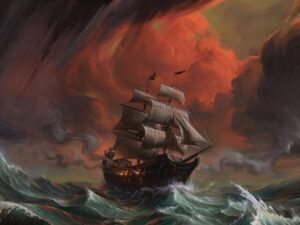 Sardinia (Italy) for having shot the CEO of Ansaldo Nucleare, designer and builder of nuclear power plants, for having claimed his action and for having greatly contributed, from prison, to the debate on our modes of action, the diversity of tactics, internationalism and the revolutionary perspective of the anti-nuclear movement.

Any attempt to isolate one of our comrades will fuel our anger and revive the sparks that drive us to act. Alfredo Cospito’s struggle is also our struggle: against nuclear power and the technocrats who rule the world.

While the extraction of uranium and other rare-earth elements continues to ravage territories and destroy bodies, while nuclear “tests” or bomb trainings have contaminated the regions and inhabitants of Quirra in Sardinia, the Hoggar mountains in Algeria, Moruroa and Fangataufa in Polynesia, and other territories taken over by the imperialist powers, while in its war against Ukraine, Russia is using nuclear power plants as a sword of Damocles, Europe agrees that nuclear power is a “green” energy, France is rushing head first to build new reactors and Italy is questioning the shutdown of its production (after all, it didn’t mind continuing to build power plants in other countries, so why continue to pretend to have stopped, right?). The projects of burying radioactive waste, in Bure (France) and now also in Italy, are not a search for solutions to the contaminations that nuclear power has produced, but tools to allow nuclear power to develop, more and more.
END_OF_DOCUMENT_TOKEN_TO_BE_REPLACED

Interruption of a democratic kermesse in solidarity with Alfredo Cospito (Rome, Italy, September 20, 2022)

On the evening of September 20, in Rome, we interrupted a democratic kermesse that took place at the Troisi cinema. The evening’s special guests were the critical philosopher Noam Chomsky and the committed filmmaker Ken Loach. We stormed in with a banner that read ‘Against every prison. 41 bis = torture. Freedom for Alfredo’, threw leaflets and read the following text.

ALFREDO OUT FROM 41 BIS
FREEDOM FOR EVERYONE

Since May 5, our comrade Alfredo Cospito has been imprisoned under the 41 bis regime.

The 41 bis is a regime of institutionalised torture, created to isolate, silence and annihilate the prisoner, thus trying to bring him to collaboration with justice. We do not want to demand more comfortable cages, nor do we want to be victims. We are against all prisons, we would like to see them burn. We are not surprised or outraged, we know very well that all this happens within a democratic regime. Democracy is based on the annihilation of the internal and external enemy. This is not a novelty linked to the advent of the so-called pandemic, this mechanism is inherent to representative democracy which, because it provides for representatives, necessarily creates an unbridgeable gap with the represented. Quite simply, for the past two years, we think that democratic regimes have dropped their masks: repression for all, permanent states of emergency, compulsory vaccination, green passes, persecution of those who do not play by the rules, rationing, etc. The situation is self-evident.

END_OF_DOCUMENT_TOKEN_TO_BE_REPLACED

25/09 TO GENOA AGAINST ANTI-ANARCHIST REPRESSION 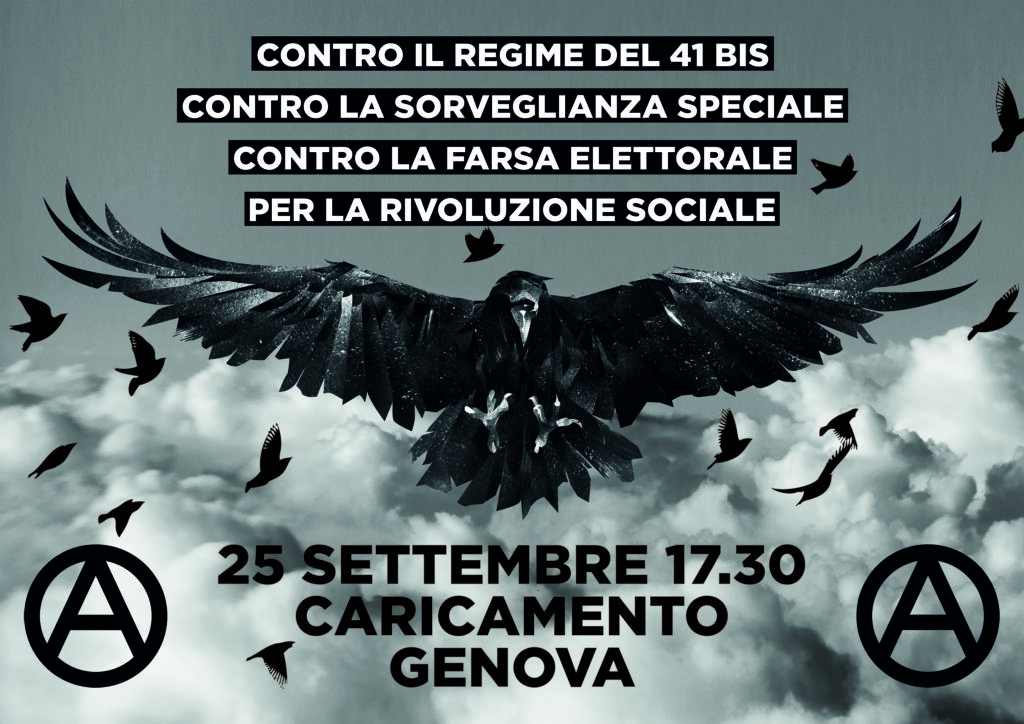 Caught in the grip of health emergencies, wars, increasingly fierce internal repression, the energy crisis, economic recession, the systematic erosion of individual freedoms, the dismantling of acquired rights, and a widening social gap, we are asked to perform an act of blind loyalty like that of a dog that, though beaten, does not shy away from its master’s harassment, of resigned submission to the inevitability of these events: the chorus of politicians of all hues, of the bosses, of the regime’s yelpers, is re-proposing to us the fatuous promise of the solution to the problems that beset the daily lives of most, of the common good, to be obtained, as it happens, through ‘tears and blood’ sacrifices to which we should also, ironically, give our consent in the electoral ballet.

It seems to us that this spectacle is a painful repetition. The assent and social cohesion that is being demanded of us is aimed more at feeding the interests of political apparatuses and the business dealings of the economic bosses, these already closely cohesive at several levels, who thrive on the backs bent by the chain of labour and necessity. To us anarchist comrades, libertarians, rebels, refractory to authority, the way forward seems clear: to resolutely oppose this power that is suffocating us and against the State, the men and women who represent it, against the prisons and all places where anyone is imprisoned, against the political and economic institutions that speculate, plundering the planet’s natural resources and degrading our lives.

END_OF_DOCUMENT_TOKEN_TO_BE_REPLACED

Banners have been hung in an abandoned building of Genova with the words:
Alfredo Cospito
out of 41 bis
For anarchy 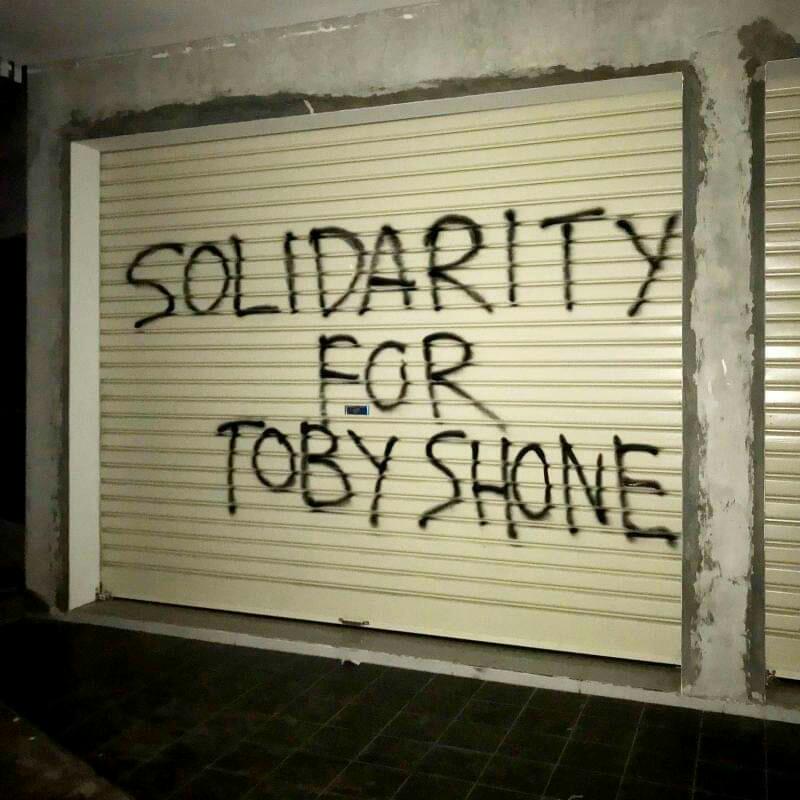 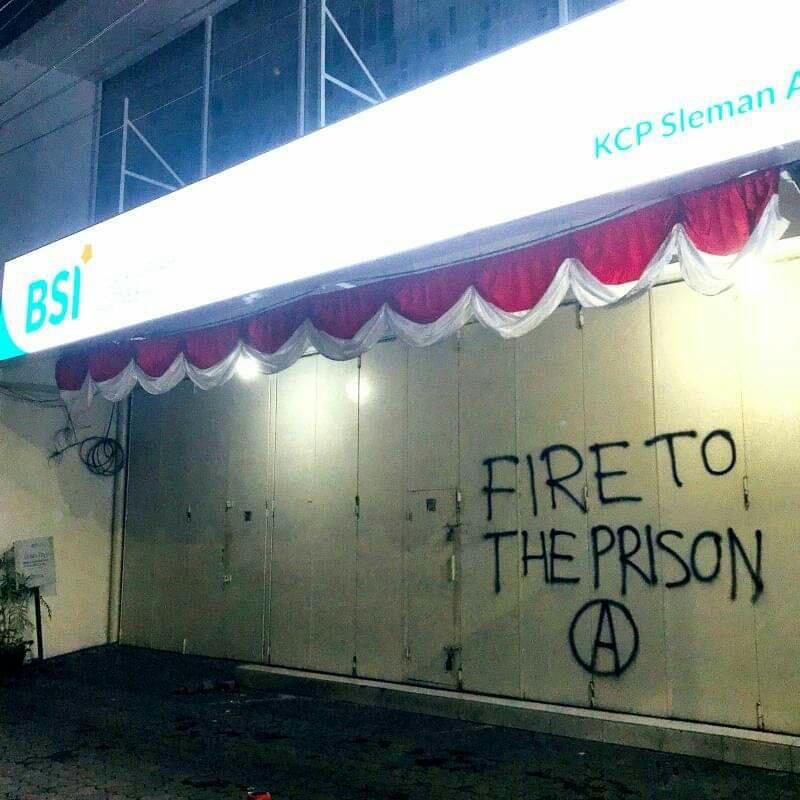 [After a first leaflet on the current situation of Boris released on July 28 -Besançon (Doubs): The medical and judicial powers are relentless against Boris-, a second text has just come out, focusing more specifically on the medical power that the comrade is facing…]

Whether in prison or in the hospital, down with power!
Solidarity with Boris
Indymedia Lille, August 13, 2022

The anarchist comrade Boris has been in prison in nancy maxéville since september 2020 for sabotaging two 5G** relay antennas during the first lockdown. He had been in prison for almost a year when, on the morning of August 7, 2021, a fire broke out in his cell. Boris was hospitalized in Metz hospital, then in the intensive care unit of Besançon hospital. He is currently in the palliative care department of the same hospital.

My first concern will be to restore, preserve or promote health (in italics, excerpts from the Hippocratic Oath)

END_OF_DOCUMENT_TOKEN_TO_BE_REPLACED 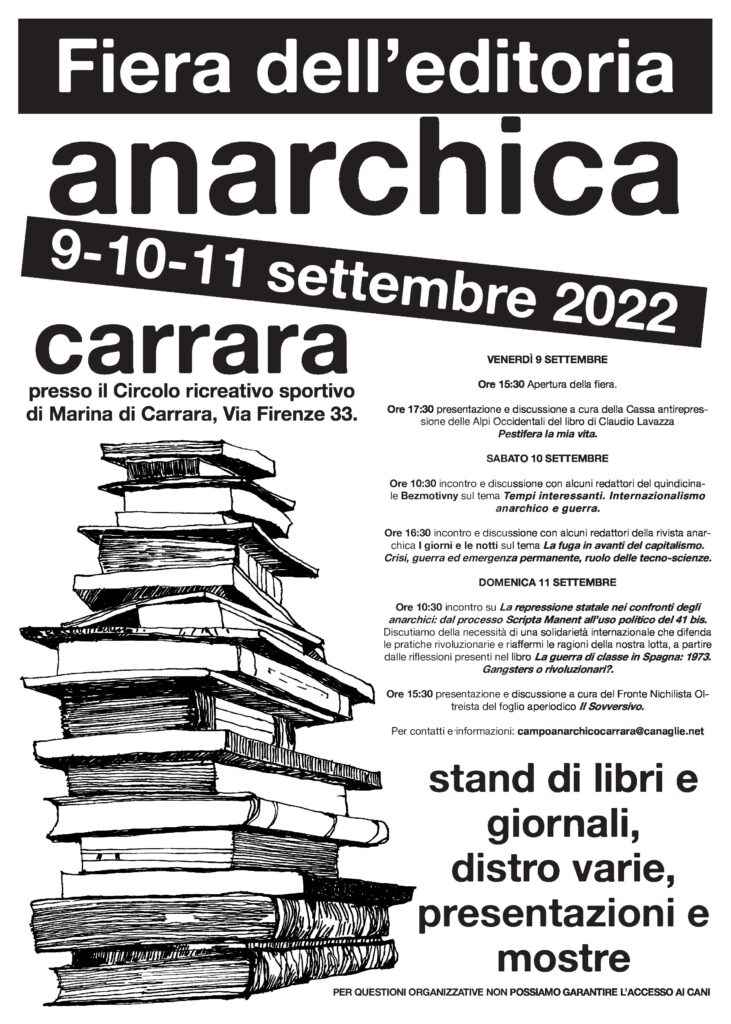 Programme of the anarchist publishing fair to be held in Marina di Carrara 9 – 11th September 2022 at the Circolo ricreativo sportivo, via Firenze 33:

15:30 — Opening of the fair.
17:30 — Presentation and discussion by the Anti-Repression Fund of the Western Alps of the book by Claudio Lavazza Pestifera la mia vita.

END_OF_DOCUMENT_TOKEN_TO_BE_REPLACED

Waging our own war

Entire cities razed to the ground. Soldiers killing defenseless and terrorized people. The exodus of millions of people. In the face of such horrors, the condemnation of war is unanimous. Our stomach can only protest, overwhelmed by a feeling of nausea.

This does not prevent most of us from living in the midst of the machinery and infrastructures that make these massacres possible. Because yes, indeed, the war starts here, at home. In the hundreds of factories, workshops and laboratories that constantly produce the instruments of death. In the deadly logistics that allow the uninterrupted flow of weapons and equipment. In 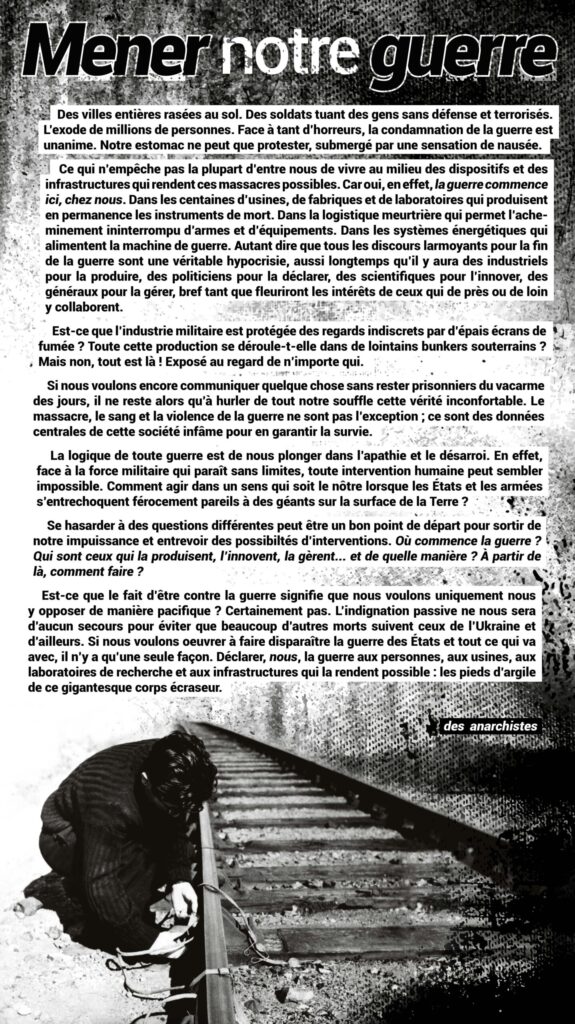 the energy systems that feed the war machine. In other words, all the tearful speeches about the end of war are a real hypocrisy, as long as there are industrialists to produce it, politicians to declare it, scientists to innovate it, generals to manage it, in short, as long as the interests of those who collaborate with it from near and far flourish.

Is the military industry protected from prying eyes by thick smoke screens? Does all this production take place in distant underground bunkers? No, it’s all there! Exposed to the attention of anyone.