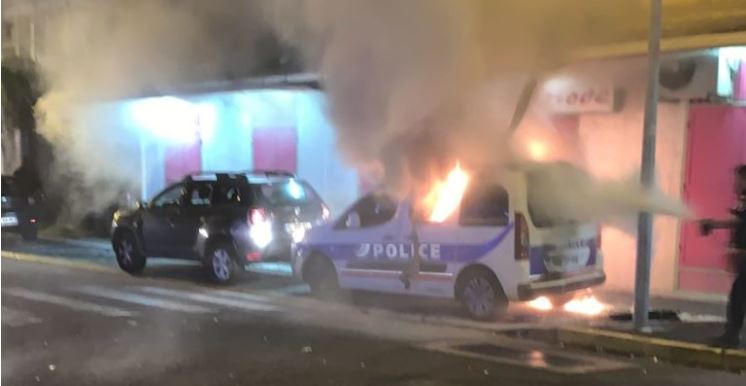 Cayenne: the police station attacked in the night

Another night of tension in the streets of Cayenne. Since the night of Thursday 9 September to Friday 10 September, the fires set voluntarily by several groups of people who want to confront the forces of order have multiplied. For almost a week now, Cayenne residents have been witnessing an increase in urban violence, often in the middle of the night. 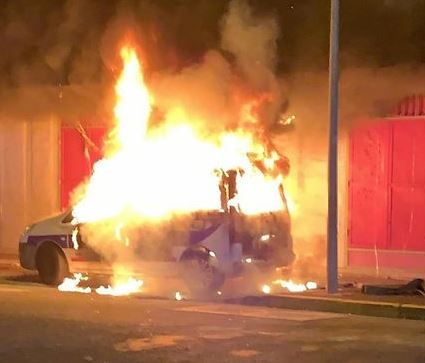 The latest effect of the opposition (…) by these groups, in small numbers, to the representatives of the State occurred last night. After setting fire to containers and bins in the ZAC Hibiscus, the protagonists of these assaults – as yet unclaimed – attacked the Cayenne police station on Avenue du Général de Gaulle.

END_OF_DOCUMENT_TOKEN_TO_BE_REPLACED 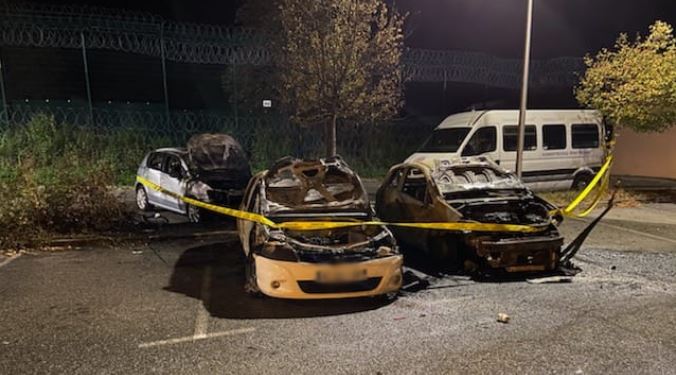 via: vsansnomTranslated by Act for freedom now!

Isère: vehicles set on fire in the parking lot of the Varces-Allières-et-Risset prison

Act of intimidation or reprisal? Four vehicles were destroyed or seriously damaged by an arson attack on the grounds of the Grenoble-Varces prison during the night of Wednesday 8 to Thursday 9 September.

It was about half past midnight when the sound of bursting tyres alerted the guard posted on one of the watchtowers overlooking the prison, who then saw the flames rising from the parking lot reserved for prison staff. This is a fenced parking lot, located at the back of the compound, after the visitors’ car park, which is accessed through a gate that opens with a keypad code.

END_OF_DOCUMENT_TOKEN_TO_BE_REPLACED 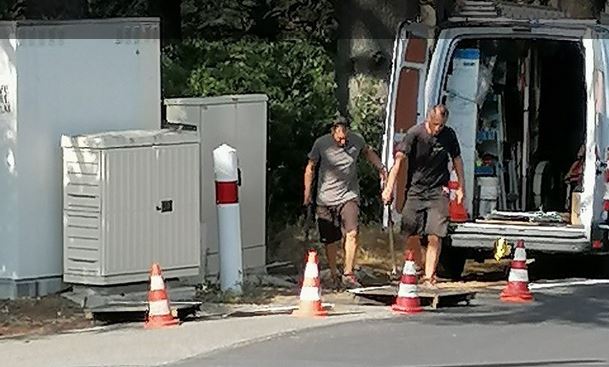 Carsan: Acts of vandalism on the fibre optic box

The village of Carsan has recently been connected to the fibre optic network and already acts of vandalism have been committed against the Orange box located at the northern entrance to the village. The incident occurred on the night of Tuesday 7 September and Wednesday 8 September.

The box was opened and the wires were cut. Part of the village is therefore without internet connection. The situation should quickly return to normal, while technicians repair and reconnect the wires.

via:sansnomTranslated by Act for freedom now!

On the morning of Wednesday 8 September, a group of 6 to 7 individuals damaged four video surveillance cameras, installed on rue du Périgord near the La Daunière residence, using a hammer. The perpetrators fled.

The urban security unit of the Massy-Palaiseau police district is conducting the investigation.

Responding to the call from comrades in Atlanta for an 21/8/18 day of action in solidarity with the struggle to defend the Atlanta forest; vandals broke into the office complex housing Corporation Service Company’s (CSC) regional office in Roseville, a suburb of Minneapolis. After smashing the office door and throwing cans of paint inside, a message was left sprayed across the front: HANDS OFF THE ATLANTA FOREST.

Demands are being made for CSC to drop their client, Blackhall Studios. Blackhall Studios would like to level the South Atlanta Forest to build the country’s largest soundstage and an airport, creating unprecedented levels of gentrification in the city.

END_OF_DOCUMENT_TOKEN_TO_BE_REPLACED

via: sansnom. Translated by Act for freedom now!

Since Monday evening, a hundred inhabitants of Kochersberg are – or have been – deprived of Internet connection. “Two network cabinets containing fibre optics were vandalised in Schnersheim and Mittelschaeffolsheim,” says Benoit Brechon, managing director of Rosace, the company charged by the Grand Est region with deploying fibre optics in around 700 rural communities.

END_OF_DOCUMENT_TOKEN_TO_BE_REPLACED 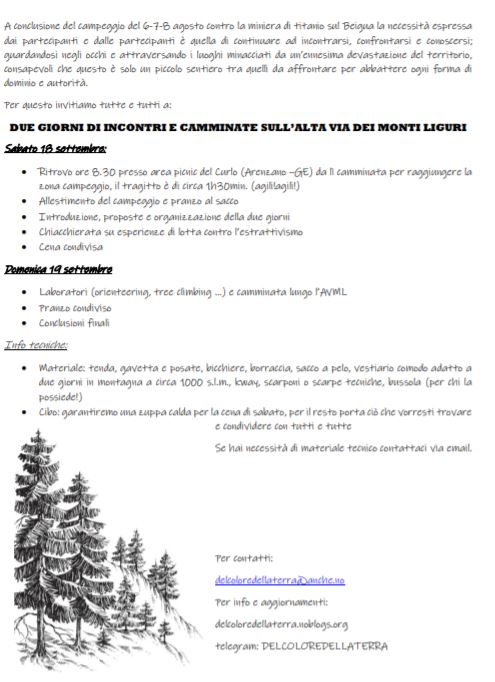 At the end of the camping of August 6-7-8 against the titanium mine on Beigua, the participants expressed the need to carry on meeting, discussing and getting to know one another; look into one another’s eyes and go through the places threatened by the umpteenth devastation of the country, aware that this is only a small path among many others to be taken in order to destroy all forms of domination and authority.

So we are inviting everyone to:

Meeting point at 8:30am at the picnic area of Curlo (Arenzano –GE), from there a walk to the camping area, a journey of about an hour and a half (come on! come on!)

Setting up the camp and packed lunch

Introduction, proposals and organization of the two days

Talk on experiences of struggle against mining

Material: tent, mess tin and cutlery, cup, water bottle, sleeping bag, adequate comfortable clothing for two days on the mountains at about 1,000 high above sea level, kway, boots, compass (if you have it!)

Food: we’ll provide hot soup for Saturday’s dinner, for the rest bring what you’d like to find and share with everybody

If you need technical material get in touch via email.

On Friday 17/9/21,  at 1pm on the 6th floor of the Loukareos Street Courts, the second degree trial of comrade Marios Seisidis continues for the armed robbery of the National Bank of Solonos Street in 2006.

During the perpetrators’ escape, the state dogs did not hesitate to shoot into the crowd, resulting in the wounding and arrest of anarchist Yannis Dimitrakis. Subsequently, Marios and Simos Seisidis and Grigoris Tsironis were declared wanted and later put on bail for 600.000 €. After almost a decade on the run the 3 wanted comrades were arrested in different places and times. Simos lost his leg to a cop’s bullet in Tauros  area in Athens, Grigoris was arrested in Volos during a raid by the SWAT team (during which Spyros Darvilas took his own life, free) and Marios in the Peloponnese together with Kostas Sakkas. Whereas Simos and Grigoris were acquitted in this case, Marios was sentenced in the first instance to 36 years’ imprisonment as the state mafia had already been irreparably damaged by the acquittals of the other two on the run. With this trial the circle of this case is closing and we must defend the legacy of resistance and solidarity that he leaves, as well as the comrade himself so that he does not remain at the mercy of state repression. Solidarity is our weapon.

EVERYONE AT THE COMRADE’S SIDE

NO HOSTAGE IN THE HANDS OF THE STATE 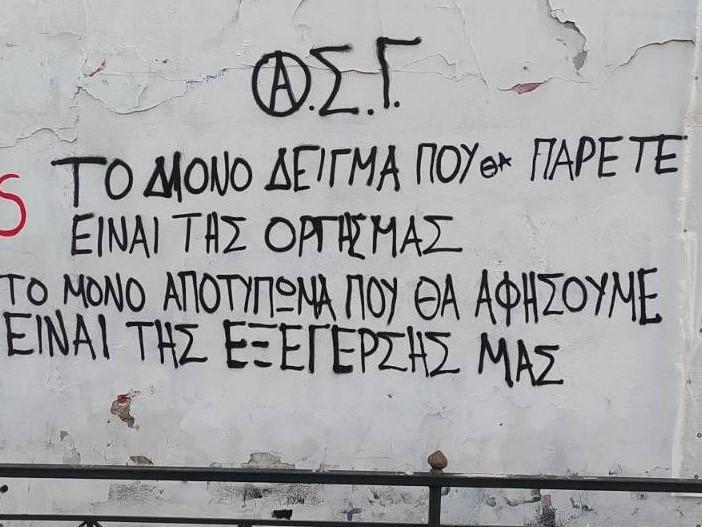 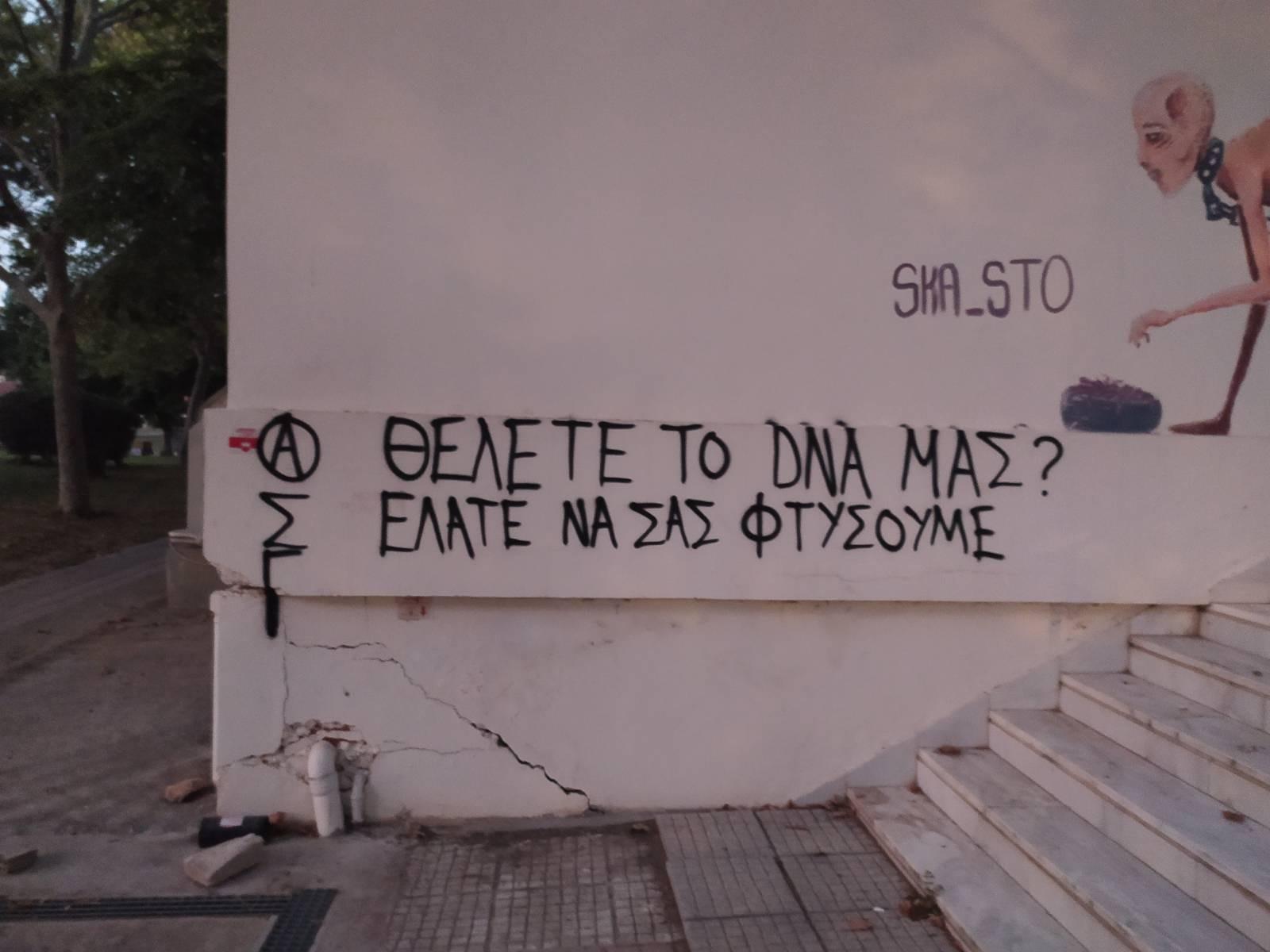 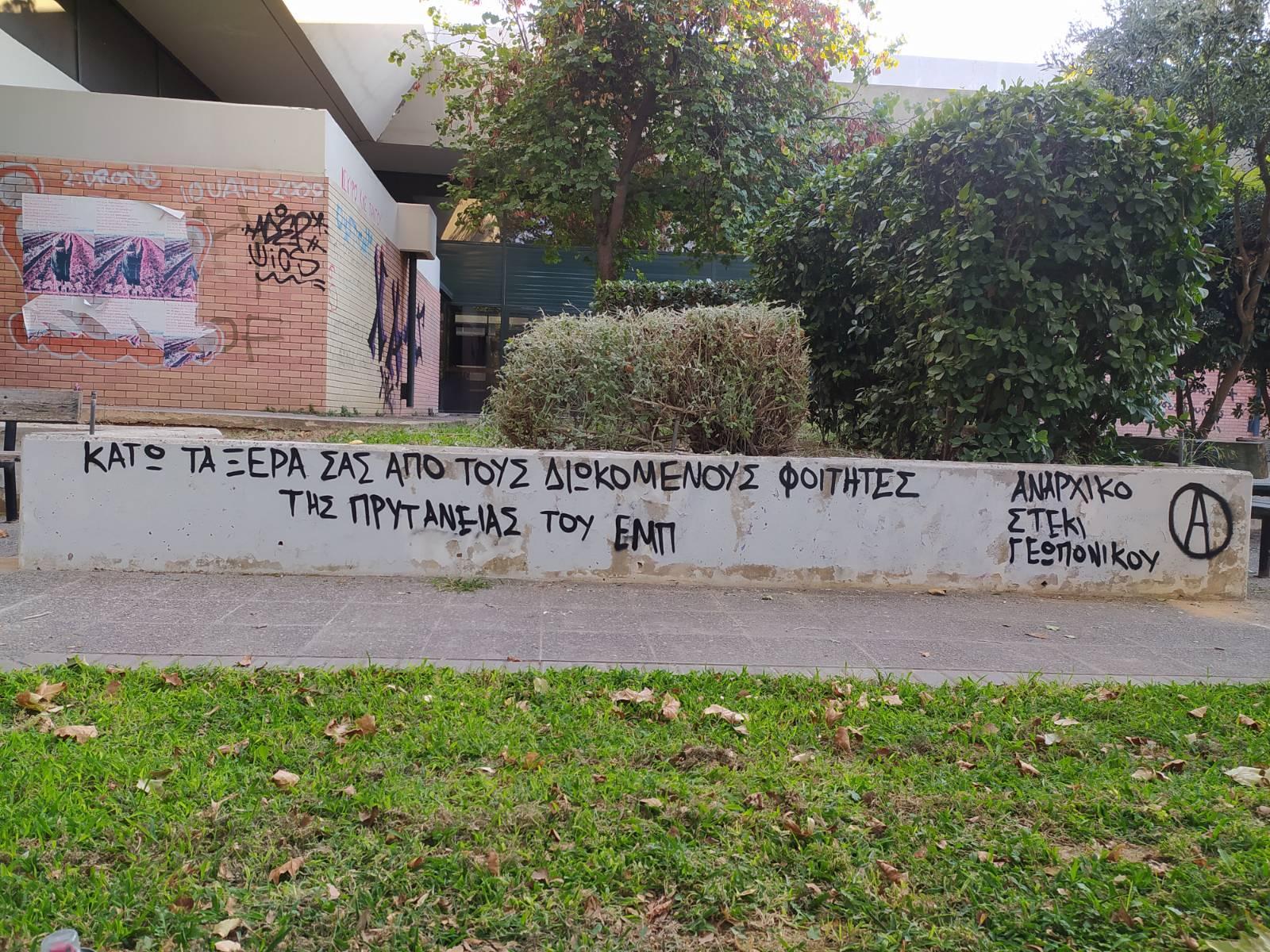 The case of the 14 comrades of the occupation of the rectorate of the Polytechnic university does not only concern them, but all the fighting parts inside and outside the faculties. This is because it is an upgrade on the part of the state, in terms of the ways of methods and repression.

The state, having yielded to the university police, is using its usual tricks, namely frame-ups and false accusations. Through these, it calls on the comrades, under the pretext of their alleged identification, to compulsorily hand over their DNA. This practice adds them to the state databases, putting them in a state of indirect hostage-taking and terrorism, as their DNA can now be used in future frame-ups. This move, through fear and example, is intended to inactivate struggling individuals and criminalize the means that have always been in our quiver.

END_OF_DOCUMENT_TOKEN_TO_BE_REPLACED

via: roundrobin.infoTranslated by act for freedom now!

I could but I don’t want to

I could convince myself that all nuclear power plants are reliable. But I don’t want to. I still keep Hiroshima, Nagasaki, Chernobyl, Fukushima in mind… As the earth becomes contaminated for ever, the usual characters in power tell us that there is nothing else to be done.

I could consider wars as something necessary to defeat enemies that seem invincible. But I don’t want to. All the deaths caused by conflicts between the States have only strengthened their domination on individuals through genocides, massacres and famines.

END_OF_DOCUMENT_TOKEN_TO_BE_REPLACED

Against the Logic of Submission