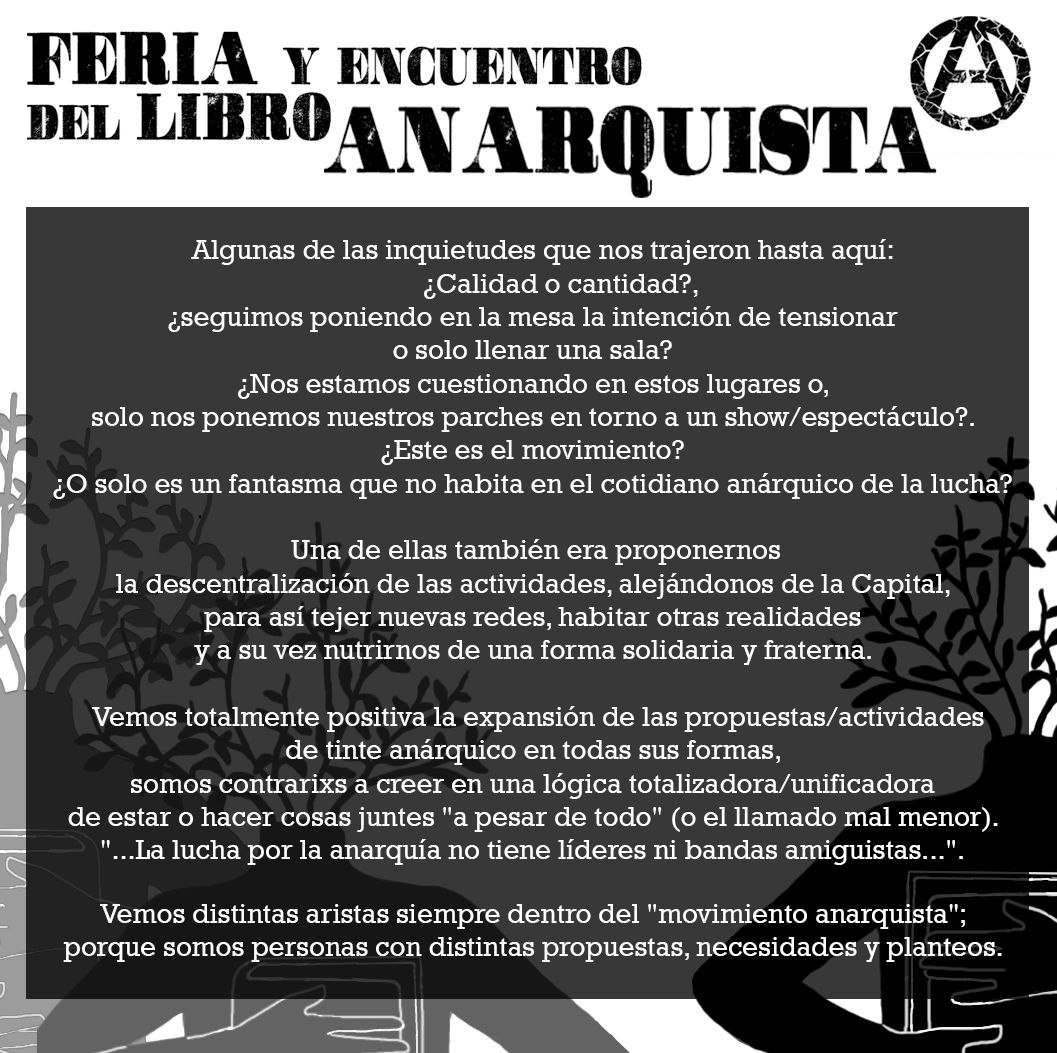 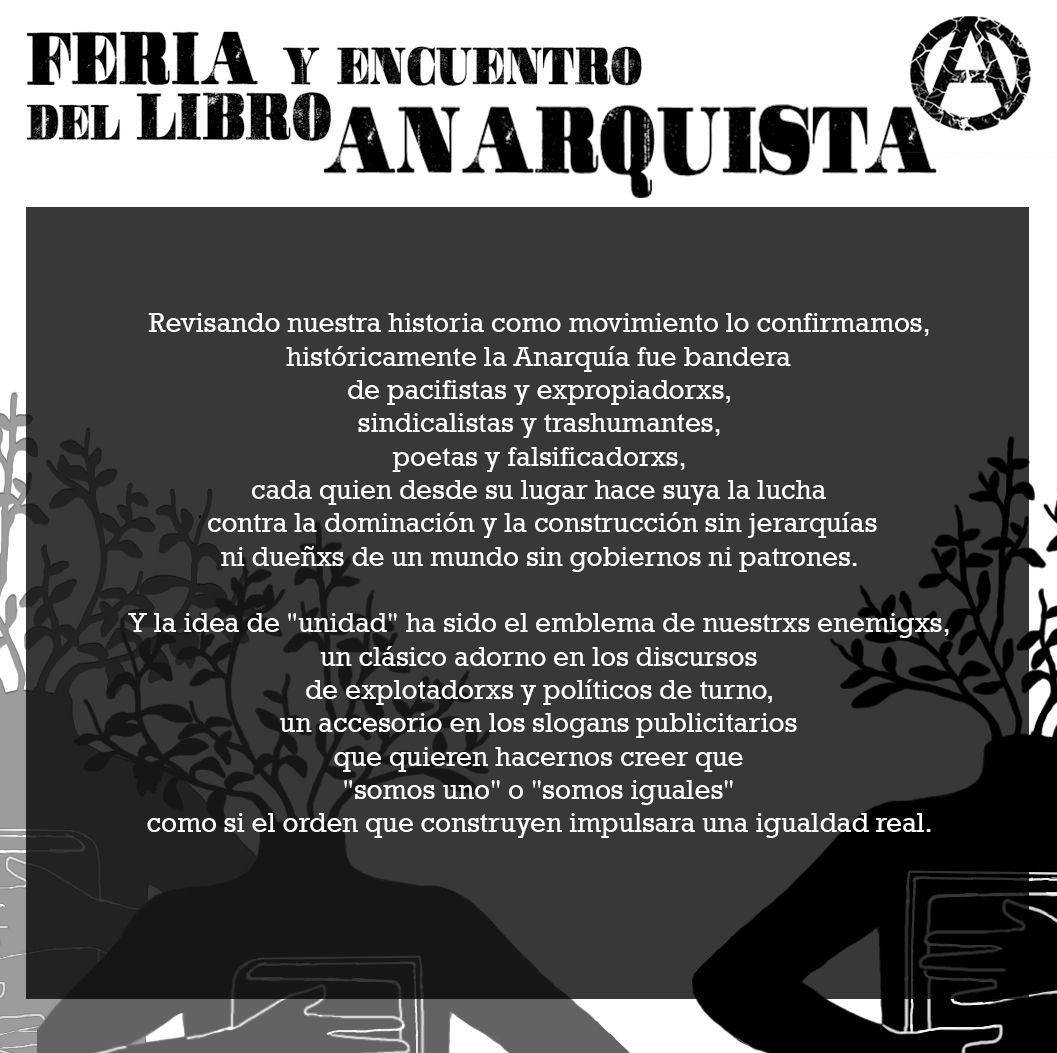 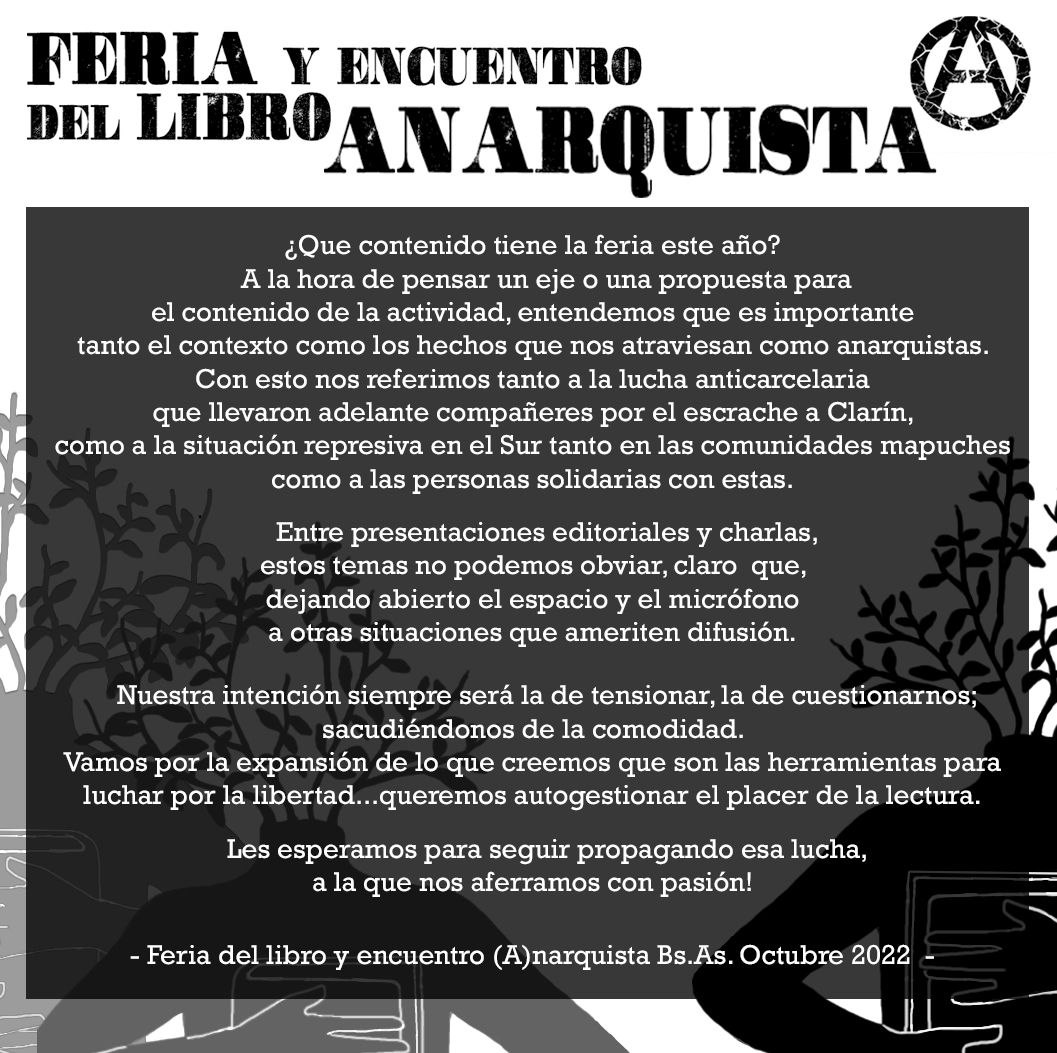 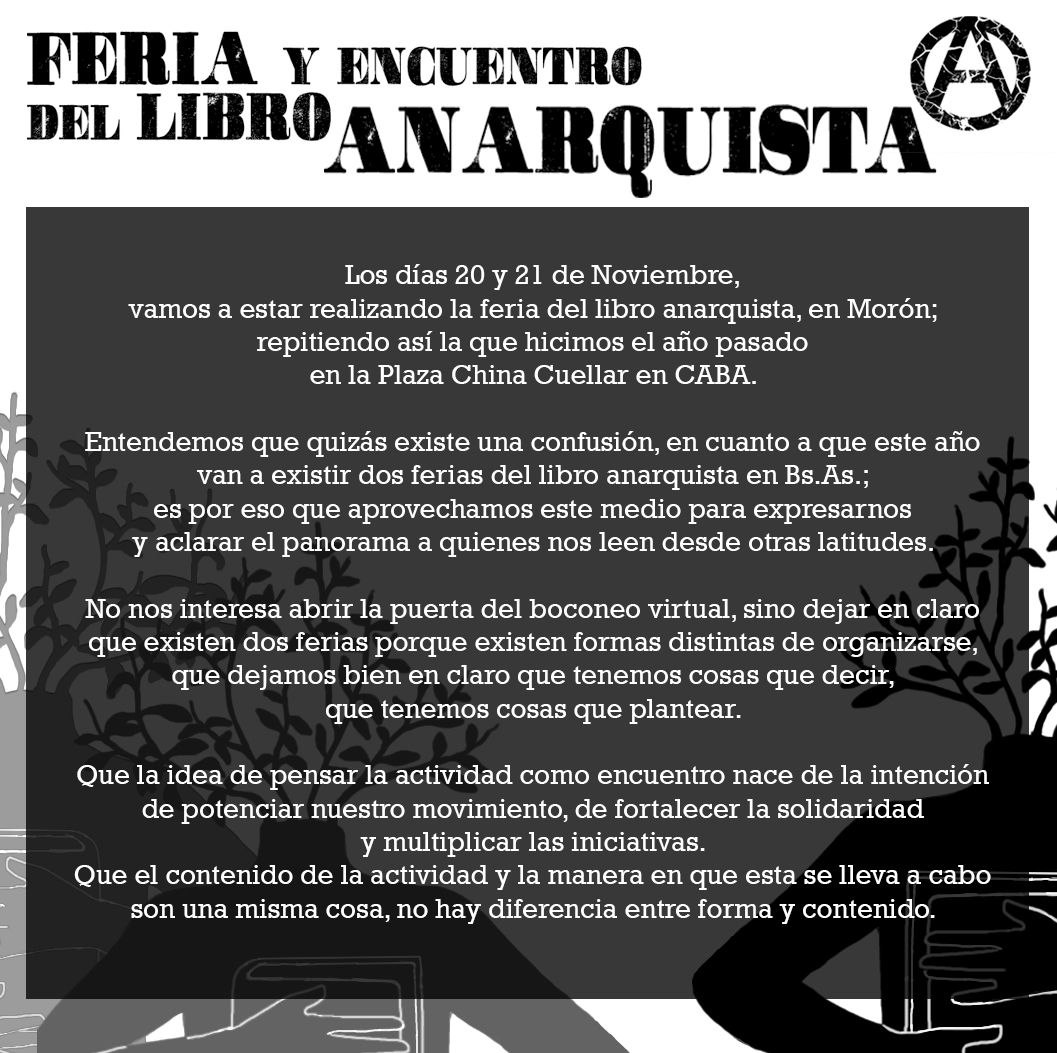 The anarchist boofair will be held November 20 and 21 in Morón; repeating what we did last year at the Plaza China Cuellar in CABA.

We understand that there may be confusion regarding the fact that there will be two anarchist bookfairs in Buenos Aires this year, and so we will use this moment to explain and clarify the panorama to those who are reading from other lattitudes.

We are not interested in opening the door of virtual gossip, but rather in making it clear that there are two bookfairs because of different ways of organizing, that we have things to say and things to suggest.

The idea of thinking of the activity as a gathering comes from the intention of developing our movement, strengthening solidarity and multiplying initiatives. The content of the activity and the way in which it is carried out are one in the same, there is no difference between form and content.

Some of the concerns that brought us here:
Quality or quantity?
Is the intention that we are bringing to the table to put into tension, or just to fill a room?
Are we questioning ourselves in these places or only putting on patches as part of a show/spectacle?
Is this the movement?
Or is it just a ghost that doesn’t live the daily anarchist struggle?

Another idea was to propose the decentralization of the activities, distancing ourselves from the Capital, to weave new networks, inhabit other realities, and in doing so nourish ourselves through solidarity and kinship.

We see the expansion of proposals/activities of an anarchist character in all of their forms as totally positive; we are against the creation of a totalizing/unifying logic of being or doing things together “in spite of everything” (or the so-called lesser evil). “…The struggle for anarchy has no leaders nor cliques…”.

We always have different points of view within the “anarchist movement”; because we are people with different proposals, needs, and suggestions.

Looking at our history as a movement we confirm this; historically Anarchy has been the flag of pacifists and expropriators, syndicalists and transhumanists, poets and forgers, each from their own place making the struggle against domination and the construction of a world without governments or bosses, without hierarchies or owners, their own.

And the idea of “unity” has been the emblem of our enemies, a classic adornment in the discourses of the ruling exploiters and politicians, an accessory of publicity slogans that want us to believe that “we are one” or “we are equal” as if the order that they construct advances real equality.

What content does the bookfair have this year? When thinking of an axis or a proposal for the content of the activity, we understand that the context and the events that impact us as anarchists are important. With this we refer to the anti-prison struggle that comrades brought forward with the demo in Clarin, as well as the repressive situation in the South faced by both mapuche communities and people in solidarity with them.

Between editorial presentations and discussions, we cannot forget these themes, leaving the space and the microphone open for other situations that merit dissemination.

Our intention will always be to put into tension, to question ourselves; shaking off comfort. We aim for the expansion of what we believe are the tools for fighting for freedom… we want to self-organize the pleasure of reading.

We await you to continue propagating this struggle, which we cling to with passion!