Act for freedom now! receive and spread:
——–
A colorful message at the Belarusian Embassy in Prague

On Friday, October 21, 2022, a colorful message was placed on the Belarusian Embassy in Prague: first, the wall was marked with red paint and then on this background was written “FREEDOM FOR IHAR A.” 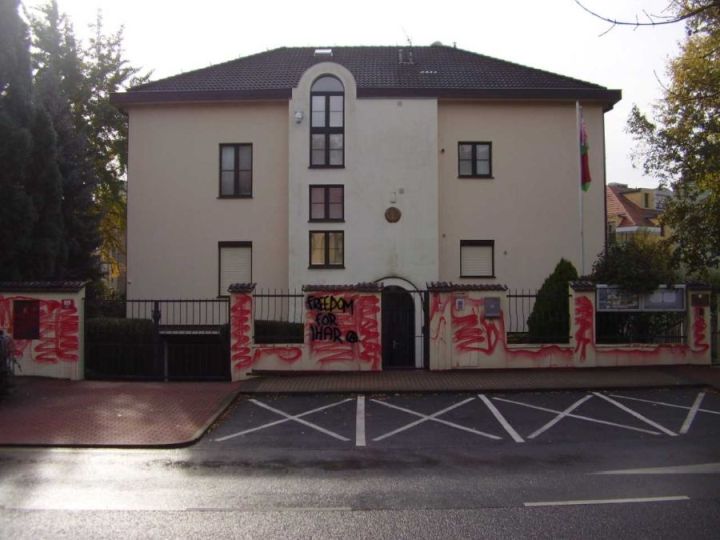 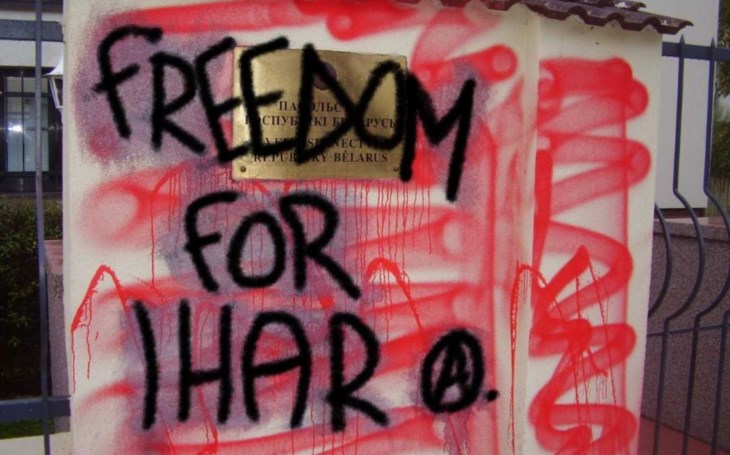 The red color symbolizes the blood of people who are massacred by the Belarusian police at demonstrations and in KGB cells. Moreover, with the current war aggression in Ukraine, the Belarusian state is a very close partner of the Russian state. Thus, the Lukashenko regime is also complicit in the bloodbath of people outside Belarus.

The colourful message at the Belarusian Embassy in Prague is a
solidarity greeting for Ihar Alinevich. This anarchist is imprisoned
because he supported the resistance against the Belarusian dictatorship.
It is important to express solidarity with him and fight for his
liberation. Ihar has decided to undergo a hunger strike in appalling
prison conditions and there is reasonable fear for his life. This is
because the Belarusian regime has repeatedly shown its disrespect for life by having people murdered in the streets, buried alive in prisons, and tortured by the KGB.

The colourful message on the wall reminds the Belarusian regime that the people see its crimes and will not be silent. Recently, colourful messages have also proliferated in the embassies of other countries:
Turkey, Russia, Iran, Ukraine… It is clear that every state is an
oppressive political formation and people have many reasons to confront all states. When statesmen attack people’s lives, at any time someone responds angrily. And that’s great. Ihar Alinevich is not alone in his struggle, and the Belarusian state will hopefully die one day.

But the bad news is that the police have arrested the person responsible for making the colourful note at the Belarusian embassy in Prague. On the same day, the court ruled in a summary procedure on a sentence of 3 months imprisonment suspended for 15 months. The convicted person said,”The punishment is bad news, but it is also a fact that punishment cannot stop solidarity. There will only be a transfer of activities to other territories and solidarity will manifest itself in a different form.”

It was not informed what activities will be implemented and where.