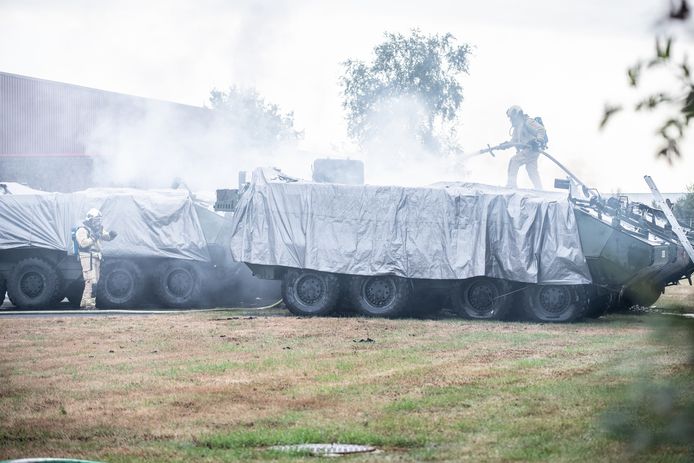 The fire broke out on Sunday morning in the Westerring area along the N60 in Oudenaarde, near the OIP company. Two wheeled armored vehicles – 6×6 Piranha IIIC DF30, i.e. equipped with a 30 mm gun – were set on fire. OIP, a subsidiary of the Israeli multinational Elbit Systems, manufactures electro-optical systems, such as goggles and other day and night vision instruments.

The fire was quickly brought under control, but the two armored vehicles were burned. No one was injured, only property damage was reported. The inscription “Shut Elbit Down” was written on the walls of the company.

According to the Defense Press Service, seven Piranha – in AIV (Armoured Infantry Vehicles) jargon – were on the premises of the OIP company this weekend for an upgrade of their optronic systems. One of them was totally destroyed and the Defense Department is examining whether the second one is considered repairable or not. The army has only nineteen of these DF30 armored vehicles, out of a total of 138 Piranha, all versions included.

“This is clearly a criminal act,” confirms Colonel Jean-Paul Baugnée, land equipment manager at the Ministry of Defense. “And each combat vehicle of this type costs 1.5 million euros,” adds Captain Laurens Rottiers.