“The most effective power is that which cannot be seen. This fact, combined with the reduction of the subject to a mere economic “animal laborans” and the deconflictionalisation and depoliticisation of society, is tending towards constructing a framework in which rules and those who decide them can hardly be challenged.”

“Depoliticisation and economic success are the most effective tools for pacifying society and maintaining control over it, and the social credit system goes in this direction.”

From 2013 Rongcheng, Chinese city in the province of Shandong,

started experimenting with the ‘social credit’ system, but the aim is to extend it throughout the country by 2023.

In Rongcheng, each citizen is assigned 1,000 initial points, and each score corresponds to a specific letter: AAA to D. The letter ‘A’ (equivalent to 1,000 points) is the basic score and entails access to certain benefits, such as preferential assistance in employment and priority in school enrolment. One can aim to increase one’s score through behaviour considered by the Chinese Communist Party as ‘virtuous’: paying taxes and bills on time, making certain purchases, sharing and spreading party ideas, etc. a long list of behaviours by which the ‘trustworthiness’ and ‘virtuousness’ of citizens is judged. Of course, reporting people whose attitudes are deemed to be improper leads to an increase in one’s score. The benefits for the highest level (AAA, accessible to those with more than 1,050 points) include: higher pension insurance, subsidies for public transport, the possibility of applying for interest-free loans, being able to rent vehicles without having to leave a deposit, requiring fewer documents for travel visas, etc.

One’s score also becomes a symbol of prestige to be displayed online, as it already is on the Baihe website, which already allows its users to publish their score. On the other hand, those who are in a difficult situation and therefore pay their bills, rent or taxes late will inevitably have their points deducted; the same goes for those who do not cross at a pedestrian crossing, who throw paper on the ground, who express political opinions not in line with the party, etc. The list of behaviour deemed ‘immoral’ is very long.

If one’s score falls below 600 points, one is put on the ‘black list’ and labelled ‘D’, which leads to real punishments. Should this happen to parents, their children would be excluded from those considered the best schools in the region. Other punishments include: being subject to recurring inspections, not being able to buy plane tickets to leave the country, not being allowed to live in certain areas of the city, public disclosure of one’s personal information, being banned from becoming a civil servant, and because companies may know who is on this ‘black list’, finding any employment becomes more difficult, facilitating the exploitation of those on this list. As if this were not enough, their faces are displayed on giant screens in shopping malls and other public places, in a sort of modern pillory, and the ringtone of their mobile phones is changed to sound like a siren, making them identifiable and judged by anyone. The Chinese social credit system is not limited to analysing an individual’s behaviour. In fact, one’s score is also supposed to be influenced by the behaviour of the people closest to him or her: dating or being in a relationship with those on the ‘black list’, i.e. people who do not respect the laws or who criticise the party, results in one’s score being lowered.

THE NEW TOTALITARIAN MANAGEMENT IN A TECHNOLOGICAL KEY

This experimental tool, passed off as a way to increase the level of moral integrity of citizens, is actually a way to catalogue, assess and control people based on obedience, financial, social and legal reliability.This using an infinity of data (Big Data) that is collected by banks, apps, social media posts, and of course also through the various ‘snoopers’, who, in order to increase their score, can report on the behaviour of other citizens. This model pushes towards a standardised life, and destroys social relations in favour of a 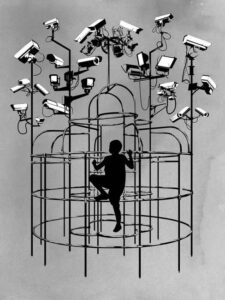 completely digitised and arbitrary system, which aims to make citizens completely homogenised and subservient to a dehumanising model of society in which algorithms will determine whether a person is worthy of being part of it or not. A system based on people’s social behaviour, including political orientation and any everyday activity, is not neutral, but massively influences those who live under constant evaluation. Rewarding those who score higher and stigmatising those who score lower, is the updated version of the famous motto ‘divide and rule’, whose members have as their sole value to think only of themselves and their own status, and who consider the individual in poverty a lazy person, who does not try hard enough to be solely responsible for his or her condition, in other words, an inferior person. The social credit system is a tool to identify and judge people in advance. A new form of totalitarianism that works at an intimate and psychological level in individual subjects, modifying their values, and that gradually through propaganda, constructs new universal models of conduct, profoundly changing the way we relate to others and the very sense of community. The strong point of this new form of management and repression is that it is perceived as bringing benefits to the community, while in reality it is founded on discrimination and standardisation of thought, on the annihilation of social conflictuality, and which pushes individuals into constant competition with themselves and forced homologation.

The West is not exempt from the use of similar systems, and lately, even Italy has started experimenting with social credit in some municipalities, now on a voluntary basis, but in the future it will become an integral part of the emerging model of society.

The city of Fidenza, in Emilia Romagna, has activated a points card

for social housing tenants in order to assess the behaviour of each family and decide whether or not they are worthy of residing there.

Tenants are required to observe a long list of rules that can increase or decrease the initial 50 points assigned to each household. Relationships with neighbours will be put to the test, as the reporting of behaviour deemed improper will increase one’s score.

Those who are reported will undergo an inspection of their flat by officers to verify the veracity of the allegations. A simple plant on the landing that inconveniences due to watering or being in the way will cost the tenant 20 points.
Even keeping the barbecue grill on the balcony, or hosting people from outside the household without notifying the municipality will result in the loss of 10 points in the first case, and 25 points and the payment of a fine in the second.
Losing points is extremely easy, and if the score drops to zero
the right to housing lapses and you are forced to leave your home.
On the contrary, recovering points is difficult, as you will only receive 5 extra points every 3 years if you have behaved like a ‘model tenant’ and one point if you participate in certain types of initiatives or if you repair a damage. How will it be possible to have ‘human’ relationships with one’s neighbours in a system that rewards whistleblowers? How can you build relationships in a context where those around you will benefit
if you report behaviour that is considered improper?

In Bologna and Rome, a project called ‘Citizen Wallet’, i.e. ‘a reward platform’ that incentivises ‘virtuous’ behaviour, has started.

This is an electronic wallet where you can accumulate points if you dispose of waste correctly, if you prefer ‘green’ to traditional means of transport, if you do not get fines, etc. These points will allow discounts on public transport, waste charges and cultural activities. In order to assess the degree of diligence of a citizen, the municipality or whoever will need access to a whole range of personal data, and will do so via digital platforms, chips on rubbish bags (RFID) and tracking apps. The whole thing, like social credit in China, is being passed off as a way to incentivise people to have ‘virtuous behaviour aimed at improving environmental, social and economic sustainability of the city’.

WE ARE JUST AT THE BEGINNING OF THIS EXPERIMENT, WHICH FOR THE TIME BEING IS ON A VOLUNTARY BASIS, BUT THANKS TO WHAT WILL BE DECLARED EMERGENCY SITUATIONS, THIS MODEL WILL EXTEND, BECOMING PERMANENTLY CONSOLIDATED EVERYWHERE. WE HAVE ALREADY SEEN THIS WITH THE ‘GREEN PASS’, WHICH, IF IT WAS PREVIOUSLY PASSED OFF AS A TEMPORARY INSTRUMENT DUE TO ‘EMERGENCY’, HAS NOW BECOME A PERMANENT INSTRUMENT OF ORDINARINESS. THIS DISCRIMINATORY DEVICE, LIKE THE CHINESE SOCIAL CREDIT SYSTEM, HAS DIVIDED THE POPULATION INTO FIRST-CLASS PEOPLE, WHO DESERVE ACCESS TO CERTAIN PLACES BECAUSE THEY ARE CONSIDERED ‘VIRTUOUS’, AND SECOND-CLASS PEOPLE, WHO HAVE BEEN DENIED ACCESS TO SOCIALITY AND ACCESS ALMOST EVERYWHERE FOR NOT ALIGNING THEMSELVES WITH THE DOMINANT THOUGHT, PAVING THE WAY FOR THE SOCIAL CREDIT MODEL IN ITALY.

Translated by Act for freedom now! via: terreinmoto.