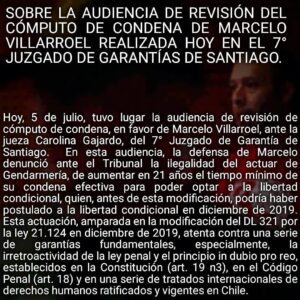 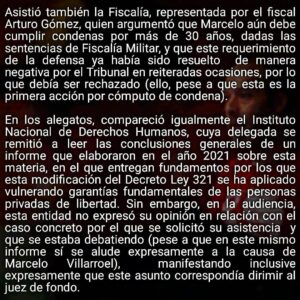 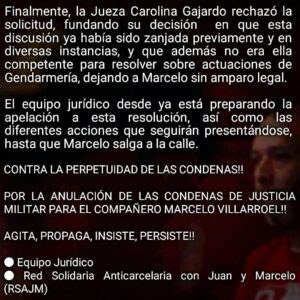 Today, July 5, the sentence computation review hearing in favor of Marcelo Villarroel took place before Judge Carolina Gajardo, of the 7th Guarantee Court of Santiago. In this hearing, Marcelo’s defence denounced before the Court the illegality of the Gendarmerie’s action of increasing by 21 years the minimum time of his effective sentence to be eligible for parole. Before this modification, he could have applied for parole in December 2019. This action, covered by the modification of DL 321 by law 21.124 in December 2019, violates a series of fundamental guarantees, especially the non-retroactivity of criminal law and the principle of in dubio pro reo, established in the Constitution (art. 19 n3), in the Criminal Code (art. 18) and in a series of international human rights treaties ratified and prevailing in Chile.

The Prosecutor’s Office was also present, represented by prosecutor Arturo Gómez, who argued that Marcelo must still serve sentences of more than 30 years, given the sentences of the Military Prosecutor’s Office, and that this request of the defence had already been resolved in a negative manner by the Court on repeated occasions, and should therefore be rejected (despite the fact that this is the first action for sentence computation).

In the pleadings, the National Institute of Human Rights also appeared, whose delegate referred to read the general conclusions of a report they prepared in the year 2021 on this matter, in which they provide the grounds for which this modification of Decree Law 321 has been applied in violation of fundamental guarantees of persons deprived of liberty. However, at the hearing, this entity did not express its opinion in relation to the specific case for which its assistance was requested and which was being discussed (despite the fact that this same report explicitly refers to the case of Marcelo Villarroel), even stating that this matter should be resolved by the trial judge.

Finally, Judge Carolina Gajardo rejected the request, basing her decision on the fact that this discussion had already been settled previously and in various instances, and that she was not competent to rule on the actions of the Gendarmerie, leaving Marcelo without legal protection.

The legal team is already preparing the appeal to this resolution, as well as the different motions that will continue to be filed until Marcelo is released.

AGAINST THE PERPETUITY OF THE CONVICTIONS!

FOR THE ANNULMENT OF THE SENTENCES OF MILITARY JUSTICE FOR COMRADE MARCELO VILLARROEL!!!