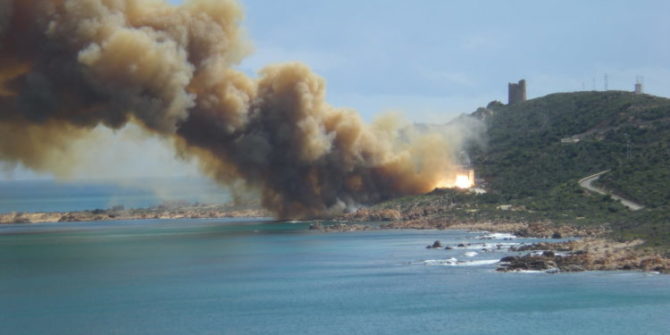 Molotov against the military headquarters?

Newspapers, not only Sardinian ones, reported the news that a molotov was thrown at the military headquarters in Via Torino in Cagliari. We’ll have our say to state how things really went and what we think about them. Yesterday there was one of the many demos that have been going on in the city in recent weeks against military exercises, which have invaded our island this month with even more violence than usual.

Yesterday evening the demo went through the streets of the centre promoting tomorrow’s demonstration in Teulada and ending as usual outside the military headquarters, where walls were smeared with red paint to remind of the blood with which they stain their hands every day.

Smoke torches lit up unintentionally burned the paint that was being thrown and the flames blackened the walls. We are not surprised at the fact that newspapers make sensationalism, perhaps to discourage participation in tomorrow’s demo, but we are not interested in this.

However we want to point out that the struggle against the military occupation of Sardinia will continue starting from tomorrow. Once again we’ll try to cut off fences and invade the bases, in the name of the slogan that has accompanied us for years: “many ways, one and only one struggle”.

Assembly against military presence in Sardinia