[Following the double sabotage on the nights of April 4 and 5 against high-voltage lines, which temporarily shut down the ST-Micro and Soitec semiconductor plants, it seems that the return to normal is not so simple. Here’s a look at some of the articles from the business press].

Grenoble’s Silicon Valley back on line after a fire on its power lines
April 6, 2022 (excerpt)

The power outage, caused by a fire on several high-voltage lines that passed over the Brignoud bridge (Isère) on Monday night, was both unprecedented and particularly impactful for the Grésivaudan basin, an area near Grenoble that is home to several major microelectronics companies such as STMicroelectronics and Soitec.

“These two companies have been able to start up again, but in degraded mode, because apart from the manufacturing losses that we will probably have to talk about later, we know that this sector has equipment that does not like sudden power cuts,” says Jean-François Clappaz, the vice-president in charge of economic promotion for the Grésivaudan community of municipalities.
Clean rooms, used in particular in the production process of the semiconductor industry, depend on filtered ventilation systems and various sensors (temperature, humidity, etc.) in order to guarantee a very low level of concentration of airborne particles and dust, which must be recalibrated in particular when they are restarted. Not to mention the adjustments to the production equipment itself, which is responsible for combining a high level of quality and volume production, while producing on a very small scale, in the order of a namometer. An incident that has already had an impact on the prices of both companies on the stock market, since after a first day of decline following the announcement of this episode (-5.3% for ST and -3.8% for Soitec), the price of STMicroelectronics was still down -3.2% this Wednesday, and -3.2% for Soitec this morning.

“An appropriate line to supply the site has been in place since 8:30 p.m. last night, and since then, all our teams have resumed work. The process of resuming production has been underway since 9 p.m. Tuesday night and will take some time, as we have protocols to follow, but it will be done in the coming hours and days,” confirms Thomas Piliszczuk, vice president of global business at Soitec. “Since we also have several production lines at this site, they can be restarted gradually, depending on priorities and our commitments to our customers.”

For the time being, the semiconductor substrate manufacturer has not yet reported any financial impact or material damage from this episode, and is confident that deliveries to its customers can be kept up, relying in particular on the production stock already available.

For its part, STMicroelectronics, which depended on another electrical substation managed by RTE, including a very high voltage line (220,000 volts), confirmed the return of a power supply on Tuesday morning, and had then started to “progressively restart the installations”. According to our information, this is currently still in progress. The group, which employs nearly 3,700 people at Crolles, said at the time that “all systems and procedures to ensure the safety of employees and facilities have been activated.”

A source familiar with the operation of the ST-Micro site told Le Figaro on Tuesday morning, April 6, that a lot of work is now needed to restart the facilities: “We will have to reprogram all the machines and clean the clean rooms, which have been in contact with dust, because of the shutdown of the air recyclers. That may take some time.” 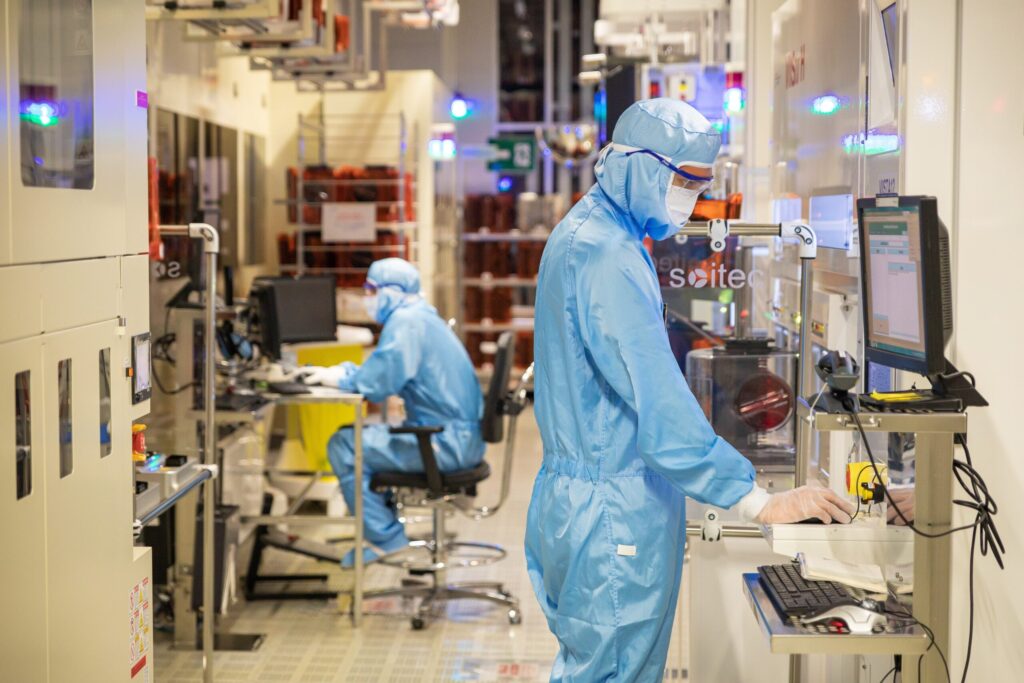 STMicroelectronics’ two plants in Crolles and three Soitec plants in Bernin, near Grenoble, in the Isère region of France, came to a sudden halt on the morning of 5 April 2022. The cause: a fire in the high and medium voltage power lines under a bridge over the Isère river linking the towns of Crolles and Bernin, which cut off the power supply to most of the companies in the French Silicon Valley of Grésivaudan.

This incident comes after a fire at an RTE power transformation center in Froges on the night of Sunday April 3 to Monday April 4. Both incidents are attributed to activists who are particularly targeting STMicroelectronics, a company they blame for consuming too much energy. The power supply has been restored, but safety procedures have forced both companies to evacuate production staff and to secure technical installations (energy, gas, chemicals, etc.).

Ongoing assessment of the damage

According to a statement from STMicroelectronics, the company is currently assessing the damage and checking the condition of the equipment in order to gradually restart production. The semiconductor industry is very sensitive to electrical disturbances… Restarting production takes time because all the machines must be inspected and restored to working order if necessary. This can take days or even weeks.

A similar situation at Soitec, where the night shift was able to start work. Everyone has been mobilized to check the condition of the machines, change the electronic cards that have burned out and the damaged seals, underlines to L’Usine Nouvelle Cyril Menon, director of operations. All production batches will be checked and production will gradually resume. The challenge for us is to minimize the impact of this incident on our employees, our customers and the company.”

This incident comes at a time when the world is experiencing an unprecedented shortage of chips, which is particularly affecting the automotive industry. STMicroelectronics is working hard to increase its production capacity at Crolles, with the opening of a Gateway 1 extension in 2021, and soon Gateway 2 and Gateway 3. These projects are part of the group’s objective to increase its production capacity by 15 to 20% this year, after having increased it by 25% in 2021, according to Jean-Marc Chéry, Chairman of the Board and Chief Executive Officer.

Crolles is STMicroelectronics’ largest industrial site in Europe, with over 4,300 employees. The unique nature of the semiconductor manufacturing process and the high cost of production equipment (each machine costs several million dollars) mean that production must never stop. The factories run 24 hours a day, seven days a week, with five shifts at the Crolles site: three on weekdays and two on weekends. Chip manufacturing is extremely energy-intensive. The Crolles site has an electrical power of 25 MW. Soitec’s Bernin site is smaller, with 1,600 employees and an electrical capacity of about 10 MW.

This incident raises the issue of power supply security for sensitive industrial sites such as those in the semiconductor industry, where power outages can cause significant damage, or even major industrial accidents, and where factories cannot be brought back into operation quickly. This episode reveals a point of weakness,” acknowledges Cyril Menon, “The redundancy of the power supply sources was not enough to protect us because the criminals attacked all the power supply lines. Our partners Enedis and RTE and the public authorities have taken the necessary measures to prevent this problem from recurring.