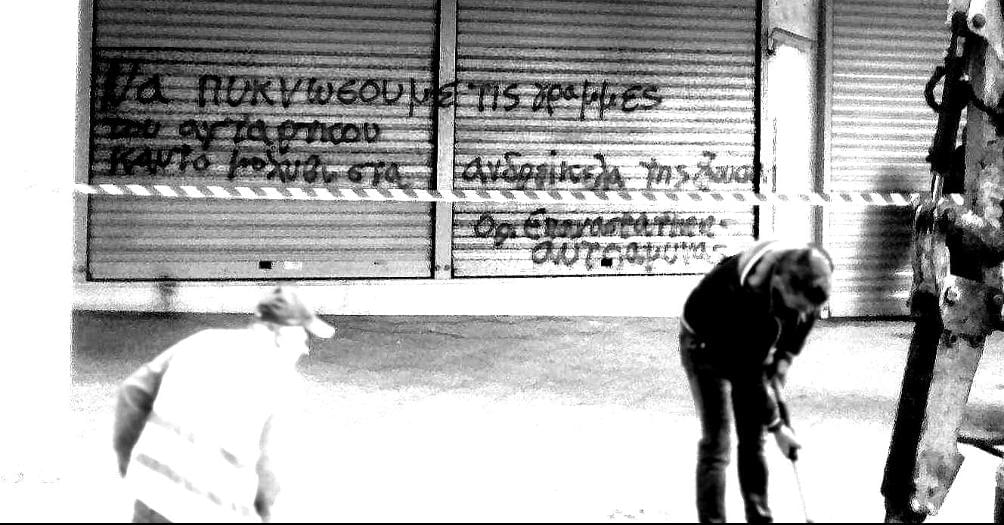 Graffiti in Athens: “Let us reinforce the guerilla struggle. Bullets to the servants of authority. – Organization of Revolution-ary Self-Defense. 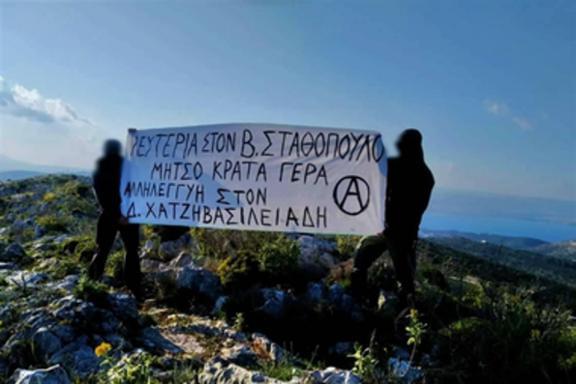 To our comrades around the world who struggle for our common liberation,

We, an initiative of anarchists based in Athens, Greece, call upon international solidarity with imprisoned revolutionary anarchist Dimitris Chatzivasileiadis, who is currently serving a 16-year prison sentence for his armed revolutionary struggle in Greece and his involvement in the urban guerilla organization, Revolutionary Self-Defense.

The funds that we raise with this campaign will cover directly the needs of our imprisoned comrade, as well as the expenses for the continuous solidarity actions and events from the initiative on the ground. The financial support of incarcerated revolutionaries is not only an act of solidarity with the fighters who gave everything for our collective liberation and thus a part of our collective self-defense; it is also a crucial tool in the strengthening of the international revolutionary struggle towards the reconstruction of our world based on the principles of freedom: horizontalism, self-organization and equal solidarity.

Dimitris Chatzivasileiadis is currently serving a 16-year prison sentence in Greece for his revolutionary struggle as well as his involvement in the now inactive urban guerilla group, Revolutionary Self-Defense. Dimitris publicly took the responsibility for the safekeeping of the armory of the Organization with the purpose to continue the armed struggle based on the legacy of the Organization. This responsibility is part of the armed struggle for the resistance to the state-capitalist aggression and towards the construction of a revolutionary movement.

Revolutionary Self-Defense was a revolutionary anarchist organization active from 2014-2017. During it’s years, the organization took responsibility for five armed attacks: against the headquarters of the Greek political party PASOK, the Mexican Embassy in Athens, the French Embassy in Athens and two attacks against the greek riot police (MAT) in front of PASOK offices in the neighborhood of Exarchia. The communiques of the organization have been translated into English and can be read here and here.

Dimitris Chatzivasileiadis went into hiding in October 2019 following an injury during an expropriation of a state casino store in Athens, Greece. After living as a fugitive from the state for 18 months, he was arrested on Monday the 9th of August, 2021, in Thessaloniki, Greece, following the expropriation of a bank in Pefka. The first degree trial for the case of the expropriation in October 2019 and the case of Revolutionary Self-Defense took place in March 2021. The state convicted Dimitris, in absentia to 16 years for participation in the Organization, as well as comrade Vagelis Stathopoulos for expressing solidarity to Dimitris by aiding him after his injury. A third person was sentenced to 10 years for providing refuge to the injured comrade and to the armory that was found and attributed to the Organization. Anarchist Stathopoulos was convicted to 19 years, as revenge for his unwavering stance of solidarity, but also for his participation in the anarchist movement, and his past conviction for the guerrilla Organization Revolutionary Struggle.

Furthermore, the state put to trial and convicted the guerilla organization Revolutionary Self-Defense as a «terrorist» group, also in absentia. The trial against the two anarchists on second degree has been set for the 9th of February 2022. The critical political matter in this trial is threefold, as comrade Chatzivasileiadis expressed in writing from clandestinity at the time: First is the matter of the liberation of the captive comrades from the hands of the state and the defense of persecuted fighters from the violence of repression, second is the defense of the practical solidarity to armed struggle, as was expressed by providing aid and refuge to an injured fighter, and third is the political matter of the defense of revolutionary struggle itself. In other words «what legacy will this trial leave behind for revolutionary struggle? Will the revolutionary propositions come out stronger, or will they have weakened? Will the movement come out more united against state terrorism or more divided?»(from Chatzivasileiadis statement regarding the trial).

There is an immediate need for global revolutionary movements: The destructive forces of Capitalism are ruining the foundations of life on this planet while the rotten rulers of this world turn to increasing authoritarianism to crush our aspirations for freedom. From the liberated communes of Chiapas to the mountains of Kurdistan; from the burning streets in the U.S. to the barricades of Chile; Revolts and uprisings are breaking out all over the world, reaffirming the historical strength of the social revolution.

The responsibility to create this reality here and now falls upon anyone who seeks freedom from the violence and misery of existence in the bourgeois State; solidarity with incarcerated revolutionaries is both a defensive and aggressive move in our journey towards social revolution.

With his imprisonment, comrade Dimitris Chatzivasileiadis has reminded us that the revolutionary struggle does not end in the dungeons of the state, this most bare expression of the violence of the state; prison is one of many repressive realities which we must collectively overcome. For his part, writing from prison, Chatzivasileiadis has reaffirmed his revolutionary commitment:

“With the proletarian uprising in my heart, anarchy in my mind, libertarian communism in practice and the universal socialist self-direction in the program, I confirm my presence wherever a new free world is conceived.”

Fellow comrades, anarchists, and everyone who fights, everywhere across the globe,

Leave No One Alone in the Hands of the State

Solidarity with Incarcerated Revolutionaries,
Until All Cages are Emptied

P.S. (The amount is intentionally set low and the duration of the campaign long as the need for solidarity is continuous)

P.S.S to anyone, – groups, collectives, organizations, squats, assemblies, initiatives – who are interested to support this campaign by organizing solidarity events (fundraisers, bars, music, discussions, actions of solidarity, etc. we encourage you to contact us via RevoltIntCampaign@riseup.net to strengthen the mutual international solidarity between us.