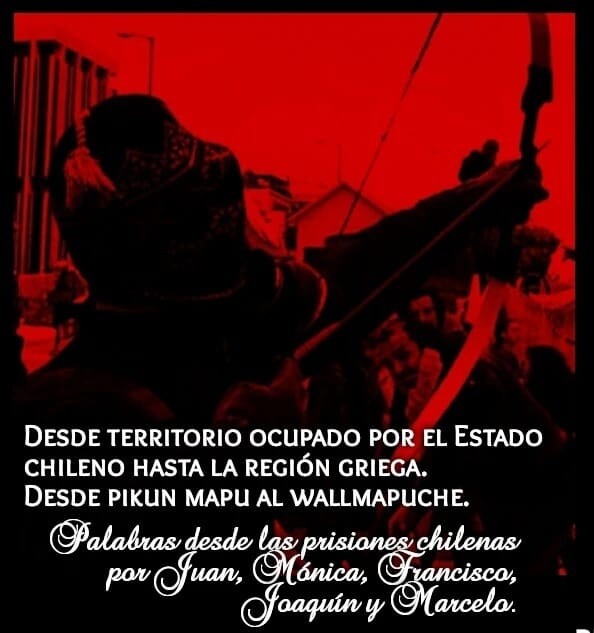 From the territory occupied by the Chilean State, to the Greek region.
From pikun mapu, to wallmapuche.

From the prisons of the Chilean State we send greetings with screams of support and solidarity, with all our insurrectionary complicity, with a fraternal hug from all of us who live locked-up as a result of our actions and conscientious convictions in our long path of social war against the State, Prison and Capital, to Giannis Michailidis, young anarchist from the Greek region that has carried out 60 days of hunger strike for his immediate release from prison, however, for Greek «justice» an anarchist bank robber and fugitive, after almost 9 years and 7 months in prison, after completing 3/5 parts of his sentence, he should remain in prison in spite of meeting all the requisites to be out on the street according to the legality that Dominion uses to quickly condemn the rebels that fight it.

Just like in Chile with comrade Marcelo Villarroel’s current situation of living under state kidnapping, the Greek State uses prison as vengeance and to send a message to those who dare attack it in order to destroy it. Using the nefarious «National Interest» they sustain a constant counterinsurgency to maintain the authoritarian social order that they defend.

From the territory occupied by the Chilean State, to the Greek region directly to the heart of comrade Giannis Michailidis, we send a subversive and anarchic hug alongside all the internationalist fraternity in permanent revolt, with all the strength of the memory in resistance and attack to the rotten world of capitalist normality.

In other parts, in the prisons of the Chilean State, today in the wallmapu the peñi Óscar Pilquiman, Cesar Millanao, Orlando Sáez and Emilio Berkhoff are on their 30th day of hunger strike demanding their respective transfers to zones close to their places of origin and on the path toward their release from prison as their unreasonable objective.

We greet the collective decision of sustaining a struggle inside of prison as an inevitable extension of the long path of weichan. We hug the explicit will of the peñi that in their own words they clearly express their wink of solidarity with anarchist and subversive prisoners that have continuously practiced throughout time, a combative solidarity with the autonomous mapuche uprising, understanding the differences of each struggle but insisting in all the reasons and motives unite us among the rebels and insurrected that defend themselves from capitalist predation, building complicity in the struggle.

For the peñi from the Angol prison also on hunger strike and for all the mapuche political prisoners, their lof and communities, for the weichave, zomo weichave, peñi and lamien in struggle, for an entire people at war, our respect, complicity, loyal solidarity and call for togetherness.

May victory in each battle of daily resistance against prisons sow the seeds of the path towards the total liberation of the peoples, individuals and communities that fight across the planet for life and against Capital.

Amulepe taiñ weichan!!
As long as misery exists there will be rebellion!!
Death to the state, long live anarchy!!
Anarchist, subversive and mapuche prisoners out of prison now!!