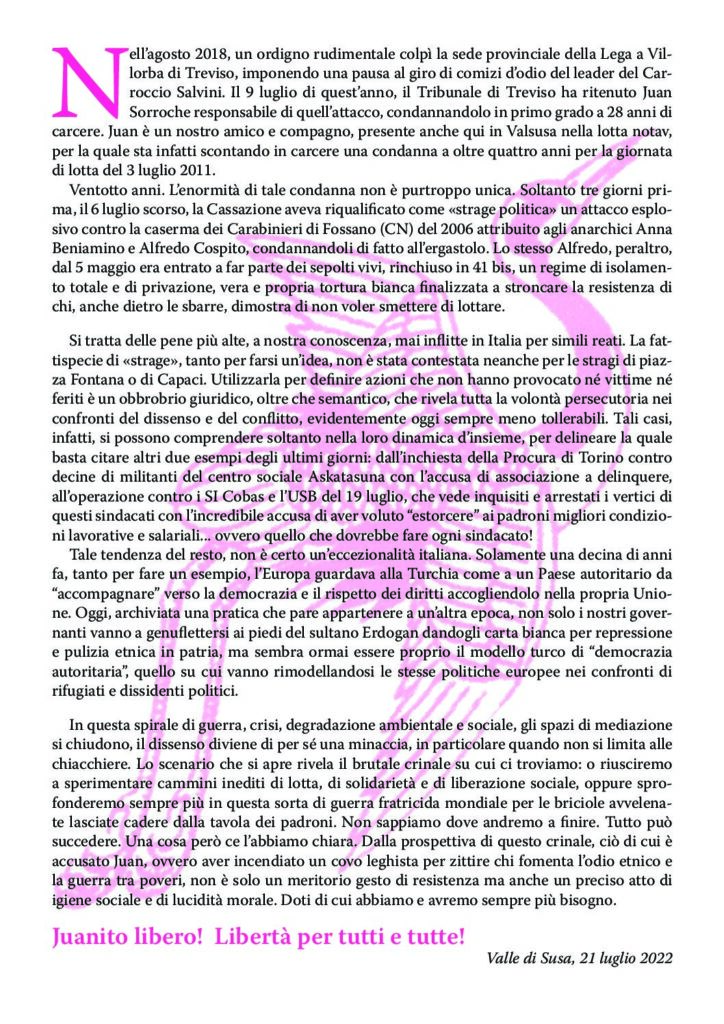 In August 2018, an improvised explosive device struck the provincial headquarters of the [Northern] League in Villorba of Treviso, imposing a pause on Carroccio leader Salvini’s round of hate rallies. On July 9 of this year, the Court of Treviso held Juan Sorroche responsible for the attack, sentencing him in first instance to 28 years’ prison. Juan is our friend and comrade, present also here in Valsusa in the notav struggle, for which he is serving a prison sentence of over eight years for the day of struggle of July 3 2011.
Twenty-eight years. Unfortunately the enormity of such a sentence is not unique. Just three days before, on July 6, the court of Cassation requalified as “political massacre” an explosive attack against the Carabinieri barracks of Fossano (CN) of 2006 attributed to the anarchists Anna Beniamino and Alfredo Cospito, effectively sentencing them to life imprisonment. Moreover, from May 5 Alfredo joined the buried alive locked up in 41bis, a regime of total isolation and deprivation, real white torture aimed at crushing the resistance of those who, even behind bars, show that they do not intend to stop struggling.

To our knowledge, these are the highest sentences, ever imposed in Italy for similar charges. Just to get an idea, the definition of ‘massacre’, was not applied to the massacres of piazza Fontana or of Capaci. Using it to define actions that caused neither victims nor wounded is a juridical abomination, as well as semantic, which reveals all the persecutory will towards dissent and conflict, clearly less and less tolerable today. In fact, such cases can only be understood in their overall dynamic, to outline which we need only cite two other recent examples: the Turin public prosecutor’s investigation against dozens of militants of the Askatasuna social centre on charges of criminal conspiracy, and the operation against the SI Cobas and the USB of 19 July, in which the leaders of these trade unions were investigated and arrested on the incredible accusation of having wanted to ‘extort’ better working conditions and wages from the bosses… in other words, what every trade union should do!

This tendency is certainly not an Italian exception. Only a dozen years ago, just to give an example, Europe saw Turkey as an authoritarian country to be ‘accompanied’ towards democracy and respect for rights by welcoming it into their Union. Today, having archived a practice that now seems to belong to another era, not only do our rulers go and genuflect at the feet of the sultan Erdogan giving him carte blanche for repression and ethnic cleansing at home, it now seems that it is the Turkish model of “authoritarian democracy” that Europe’s own policies towards refugees and political dissidents are being reshaped on.

In this spiral of war, crisis, environmental and social degradation, the spaces for mediation are closed, dissent itself becomes a threat, particularly when it is not limited to chatter. The scenario that is opening up reveals the brutal crossroads at which we find ourselves: either we will manage to experiment unprecedented paths of struggle, solidarity and social liberation, or we will sink deeper and deeper into this kind of worldwide fratricidal war for the poisoned crumbs dropped from the bosses’ table. We do not know where we will end up. Anything can happen. One thing, however, is clear to us. From the perspective of this crossroads, what Juan is accused of, namely having set fire to a leghist lair to silence those who foment ethnic hatred and war between the poor, is not only a meritorious gesture of resistance but also a precise act of social hygiene and moral lucidity. Qualities that we need and will need more and more.

Via: ilrovescio.info Translated by Act for freedom now!