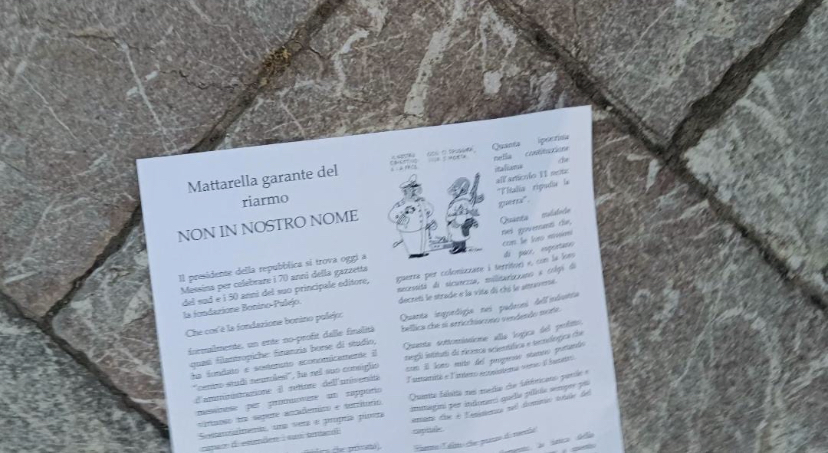 NOT IN OUR NAME

On 13th April a celebration for the 50 years of Gazzetta del Sud, where the president of the republic was present, was met with protests in Messina.

After a meeting against war in Piazza Municipio we moved closer to the Teatro Vittorio Emanuele at the start of the celebration, in spite of the fact that the city centre was militarized and the streets adjacent to the theatre were blocked for Mattarella’s arrival.

We tried to oppose this circus of power by unfurling a banner, shouting chants against rearmament and military bases, which are everywhere on the island, and improvising a cacerolazo with pans, bowls and spoons. Police seized the banner and broke the microphone used for speeches after about ten minutes.

Here is the leaflet that was handed out.

The president of the republic is in Messina today to celebrate the 70th anniversary of Gazzetta del sud and the 50th birthday of its most prominent editor, the Bonino-Pulejo foundation.

What is the Bonino-Pulejo foundation: formally, a non-profit body with almost philanthropic aims: it finances scholarships, founded and economically supports the “Neurolesi study centre”, the dean of the Messina university is on its board of directors to promote a virtuous relation between academic knowledge and the territory. Substantially, a proper octopus capable of extending its tentacles

• over the health system (both public and private)
• over the university (nothing structural has changed in the twenty-five years since the violence and scandals which prompted the anti-mafia commission of the time to speak about a “nest of worms”)
• over information and politics: its ex-president Nino Calarco, for forty years the editorial director of Gazzetta del sud, was a Democrazia Cristiana [Christian democratic party] MP and director of RTP. Moreover he was at the head of the Stretto di Messina society, in charge of realizing the construction of the Bridge on the Strait of Messina – which the patrons and bosses of the city have always promoted, unlike a massive popular movement that tried to block their road. Succeeding only in part: given that billions of public money were wasted to analyse the feasibility of the bridge, they were at least taken off security processes.

What hypocrisy in the Italian constitution, whose article 11 says: “Italy repudiates war”.
What dishonesty in the ruling class, who with their missions of peace export war to colonize territories and who with their need of security militarize the streets and the lives of those who walk them.
What greed in the bosses of the war industry who get rich by selling death.
What submission to the logic of profit in scientific and technological research institutes, which with their myth of progress are leading humankind and the entire ecosystem to the abyss.
What falseness in the media which fabricate words and images to sweeten the increasingly bitter pill of living under the total domination of capital.

But in spite of isolation, the exertion of survival, the pain of being in this world, we haven’t completely lost our refusal and intuition yet.

We smell the stink of your money, we who are forced seek it to pay the bills; the rancid smell of your feet that stamp on workers; the stench of death in battlefields and prisons and psychiatric wards and cities and houses where more and more bodies of sisters and brother are piling up lifeless: made suicidal by society.

We are the human community that feels, loves, resists and wants to rebel.

In solidarity with Russian and Ukrainian antimilitarists and deserters.

Accomplices of dock workers who block the loading of arms and of those who struggle against war.

With our hearts to comrades all over the world imprisoned for struggling for freedom.

Those with souls on their shoulders