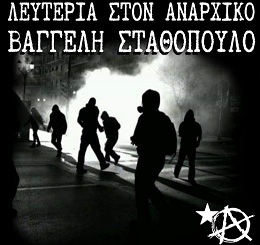 “By convicting me, they are convicting and sentencing solidarity in a court that just processed the prefabricated case file of the counter-terrorism service. Refusing all the accusations made against me I remain a political prisoner in the modern prison hellholes … “
Vaggelis Stathopoulos

In a political trial with fake data from the counter-terrorist service, comrade B. Stathopoulos was sentenced to 19 years’ imprisonment without suspension. This tactic is used repeatedly by the prosecuting authorities to bend those who fight against the State and authority.

As anarchists, we consider it unthinkable that a comrade’s sentence of 19 years’ prison for the consistency and solidarity he has shown, pass in funereal silence by the anarchist movement almost in its entirety. This seems to be the consequence of the movement’s wider sense of defeat and lethargy at the present time. We for our part chose to break the silence and send a signal of solidarity to the imprisoned comrade V. Stathopoulos.

To break inertia, to create direct action groups and hit the State mechanisms and their dogs until the noise from the attacks is heard inside the last cell of their  rotten system.

FREEDOM TO V. STATHOPOULOS
FIRES TO ALL THE PRISONS
Direct Action Groups