As a minimum indication of solidarity to the people arrested, tortured and jailed from the events of Nea Smyrni (initially, on 7 March midday at the ‘polis park’, the square and the park, but also afterwards, on 9 March with the pogroms in our neighbourhoods after the overwhelming river of people’s rage), we intervened with banners and paint in the areas of Nea Smyrni and Palaio Faliro, of Neos Kosmos and Agios Dimitrios. Throughout and against prohibitions, rifts of collectivization and explosions blossom.

Nobody alone in the hands of the State

Solidarity to the people arrested for the events of Nea Smyrni

Immediate release of the imprisoned

Life is not an image in the news. The chronicle of Sunday 7/3 in the neighbourhood of Nea Smyrni

Life is not an image in the news

At noon on Sunday we were holding our traditional gathering at the Polis Park theatre. We suddenly saw 8 DIAS enter the square of Nea Smyrni, moving people away from the public space.  We realized they had been terrorizing two families with children under 10 and some of us went to express our solidarity. We asked what had happened exactly, they answered with an expression of joy that locals had run to support their absurd experience, that they had been fined because they were sitting on the bench with the children, while wearing masks and having communicated a permit code. We then asked the state armed forces with their provocative attitude, to speak. A person from our assembly started filming the incident on their phone, and a cop jumped to take it. In our attempt to protest the cop’s vindictive behaviour, they pulled out their folding metal truncheons – something that, as far as we know, is not provided in their equipment – and violently threw two members of our assembly on the ground in order to take them in. What follows was recorded in the numerous videos and testimonies of the residents present, i.e., the cops’ response to the demand of members of our assembly to release the two people: a raging crescendo of violence that resulted in two people being beaten and the arrest of six people from our assembly as well as five other residents who were protesting. Within minutes our neighbourhood turned into a spectacular exhibition of a large AT, as DIAS, OPKE and DELTA patrols arrived, carrying out checks and manhunts (DIAS bike team in particular) inside the Nea Smyrni area, driving at breakneck speed amidst young children and people out exercising. The detentions that took place in GADA turned into arrests, with a vulgar indictment which we attach a photo of. .. .

The neighbourhood took a stand

Throughout all of the above, residents protested, either in the streets or from their balconies, shocked and outraged by police violence witnessed by numerous young children. An entire neighbourhood was shouting, videorecordinging and trying to intervene by any means to stop this horror. After the forces withdrew, people spontaneously and reflexively gathered en masse in the afternoon in the central square of Nea Smyrni, and with a rough banner we wanted to send a loud message:

COPS OUT OF OUR NEIGHBOURHOODS

With this slogan, around 1000 people marched, amid applause from the balconies and people spontaneously joining the procession along its way, from the square to AT N. Smyrni and then back to the town hall, where we were attacked with flash-bangs and tear gas by MAT and DELTA.

From the moment news of the incident was published, the crows of the media were talking about an attack of 30-40 hooded men against police officers – we confess that we were actually wearing masks because of the pandemic. We are not surprised, as the role of the media is to distort in the interests of the state and capital. The culmination of their propaganda was the statement of Kyranakis, ND MP, to OPEN, on Monday morning, where he “passed on” data – from state security – about the member of our assembly who was severely beaten, their political identity, as well as their false participation in a collective. This act proves once again that the state takes revenge on whoever resists state barbarism and arbitrariness. It is clear, then, that for the media and the state, supporting two families in solidarity and resisting violence and discipline on the part of the authorities, whether in the form of a fine or physically, makes you “dangerous” and “aggressive “,  and for that will punish you with batons and arrests, courts and fines.

Another point of view we want to take a stand on is that of the mayor of N. Smyrni, Stavros Tzoulakis, who in the council press release kept a safe distance from the issue, “condemning violence wherever it comes from”. He states that “public health rules must be observed by all the public in order to preserve the supreme good of life.” This position washes away and legitimizes the cops’ actions and gives the green light to the state monopoly of violence, using the alibi of the covid-19 pandemic and the necessary security measures. But, for us, the supreme value is not only health but also freedom, which is in even greater danger under this regime of misery, confinement and progressive totalitarianism.

When we made the collective decision to go towards the two families we were moved by a spontaneous instinct of self-evident elementary solidarity. For a year now, we have been living under a regime of terror: bans of all kinds, fines, violent repression of any political act and, at the same time, zero sanitisation of the pandemic, as its management by the state focuses on reducing social reflexes alone. Police are portrayed as “front-line heroes” dealing with covid-19. For us, they are just a load of brats thirsty for power, carrying out the State’s orders. Wearing uniforms, medals and armour, cops roam our neighbourhoods in the form of a terrorist spectacle, rewarded with hefty salaries. The only thing they know to do well is to spread fear and violence such as we experienced on Sunday. So, knowing that you cannot have any conciliation with the brutal violence of the state, we chose to approach the two families. The cops, as officials in power, chose to attack us. An entire neighbourhood saw exactly what had happened, rose up and took to the streets against the police. At the same time, a network of spontaneous counter-information broke out on social media, denigrating cops, mayors, the state and the media, for their lies and attitudes, while in the afternoon people on balconies and passing vehicles applauded and the procession included children and parents. A gushing river that did not hesitate to head towards the cops. These moments are indelibly etched in the conscience of those who were there. And this is our vindication.  There is nothing left to say in the institutional ways. Society will say it all.

LIFE IS NOT AN IMAGE IN THE NEWS, CONSCIOUSNESS IS BORN

PROHIBITION OF LOCKDOWN NOT OF LIFE

STRENGTH TO THE ARRESTED PERSONS 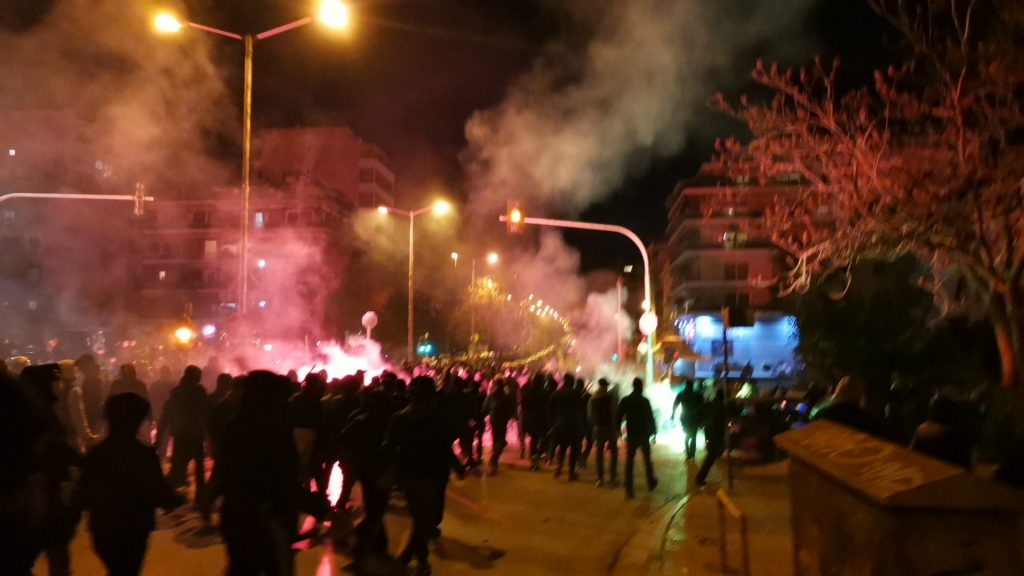 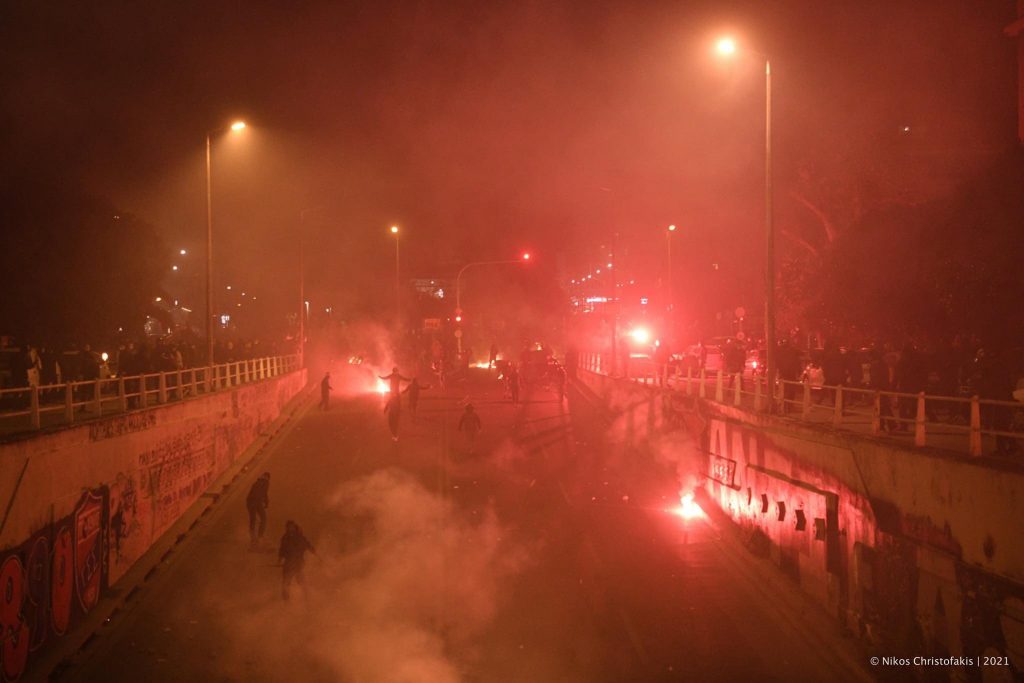 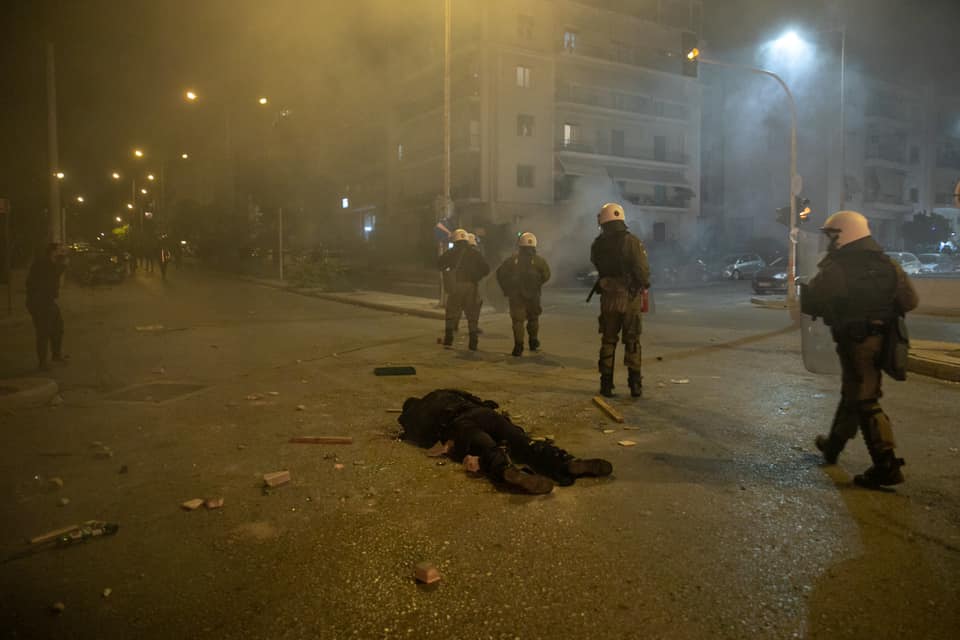 From 5pm a diverse crowd of people of all ages, many young, started to arrive for the demonstration called for 6pm against indiscriminate police violence against people in the squares. For the first time there was unity among people, some of whom normally share no common ground, but here anger was overflowing against the same enemy: the offspring of the much-hated DELTA and other mobile cop forces. The presence of the anarchists, antiauthoritarians and autonomists was massive and it was their banners and slogans that set the tone.

The square filled up, thousands came (at least 7,000) and spilled over into the surrounding streets, anger spurring them towards the police station where some launched a massive attack on the cops. Heavy clashes followed, the cops fled, abandoning one of their own to the people’s rage and only later did they gain control through the use of chemicals against the crowd.

What happened that day was the first taste of what is to come: a mass uprising against the police State.