From the gathering in solidarity with the hunger striker, Giannis Michailidis, on hunger strike since 23/5 /22 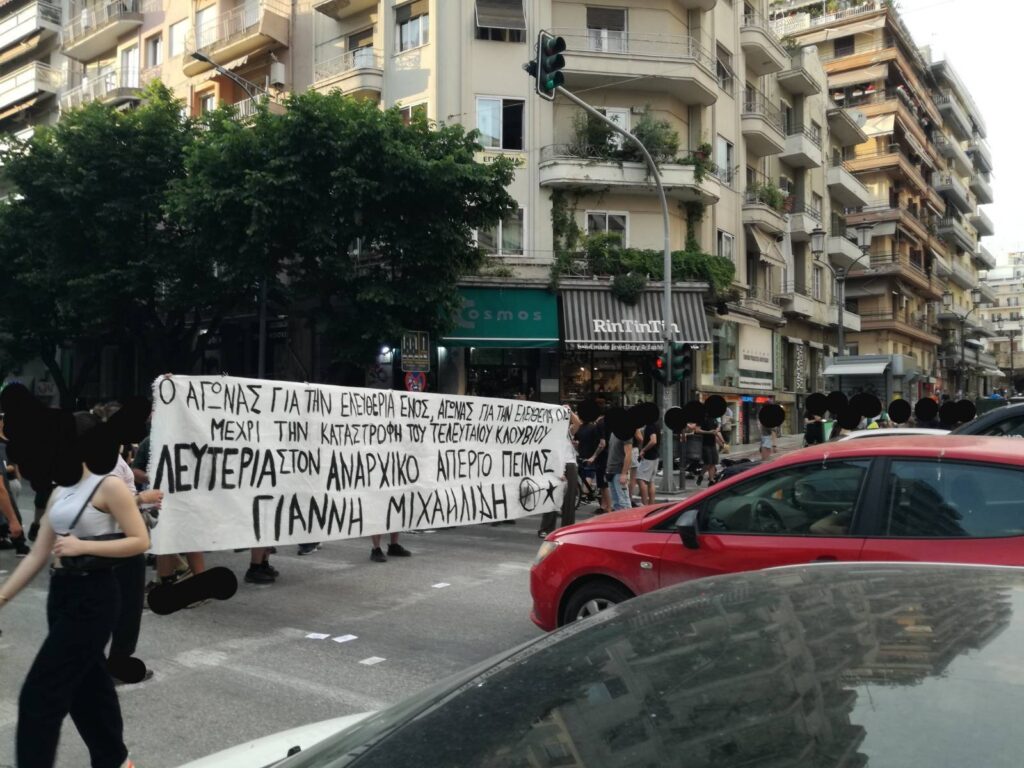 As part of the nationwide day of action, a solidarity gathering for Giannis Michailidis was held in Thessaloniki with the participation of more than 70 comrades.

During the intervention, Tsimiski Street was blocked several times at the level of Navarino street and hundreds of texts were handed out to passing drivers and residents of the area. 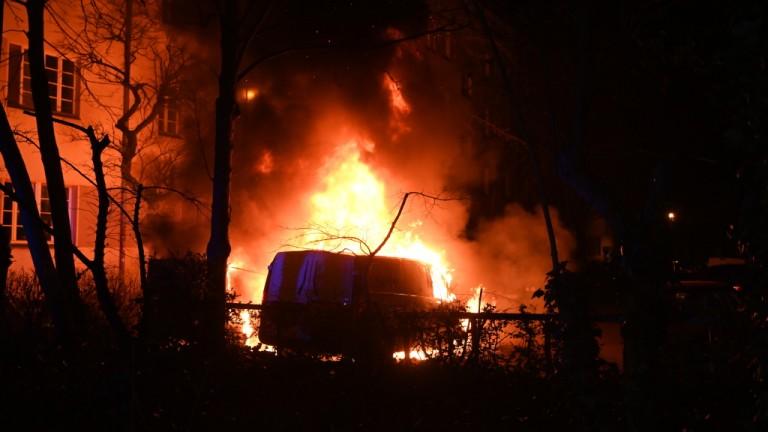 Wednesday night, March 23, we set fire to a car of the company SPIE in Prenzlauer Berg. SPIE participates internationally in the construction and operation of prisons and other facilities for the purpose of total surveillance and control. Educational institutions, parks, transportation infrastructure, and consumer strips become places of discipline under the electronic eyes and sensors of a mix of private and state security systems. Where people could organize and shape their own lives, where they could resist and simply take what they are not granted under capitalism, companies like SPIE are contributing to the technological assault. Too little is opposed when it comes to the enemies of freedom. Let’s burn down their cars, let’s paralyze their infrastructure!

END_OF_DOCUMENT_TOKEN_TO_BE_REPLACED

In recent years our days have been filled with news of deaths, with numbers of dead, with the words of “experts” who command arrogantly and boastfully from the power they have been given. They are filled with unreasonable orders and outrageous government impositions. We do not intend to extensively analyze positions on the health crisis. The tragic shortages of medical personnel, equipment and infrastructure, the “stain” of 100 deaths a day, i.e. the dire consequences of decades of privatization of public health care. The provocative strengthening of the private sector, exemplified by the big pharmaceutical companies and health giants, whose profits have reached historic highs. The re-emergence of the ‘strong’ state model to restore capitalist equilibria. The strengthening of centralised powers and the emergence of a new caste of all-round technocrats, with the role of abdicating and covering up the responsibilities of the state apparatus and shifting the responsibility for the spread of the virus to the individual. These are just some of the points that shape the management of the pandemic by the capitalist states.

Throughout the pandemic, the key issues that have dominated the public debate have been around public health, mental health and the effects of incarceration, the social exclusion of increasing segments of the population, growing class inequalities, the wider capitalist division of available resources, the role of science and technology, civil rights and the diminished role of bourgeois democracy in emergency situations. END_OF_DOCUMENT_TOKEN_TO_BE_REPLACED

On 8/2 in the early morning hours, comrade Thanos Xatziagkelou and comrade Georgia Voulgari were arrested on the occasion of an arson attack at the Foundation for National and Religious Reflection and in the afternoon of the same day, comrade Panos Kalaitzis was arrested with a unique connection between his friendly and comradely relations with the former. In the following days the charges were upgraded to formation and membership of the Anarchist Action Organization and on Friday 11/2 the prosecutor ordered their pre-trial detention.

As a reflexive and minimal response we proceeded with coordinated attacks with hammers on :

1 atm in Agia Sofia Street in the Centre

2 atm on Agios Dimitrios Street in the Centre

1 atm at the War Museum

1 supermarket and 1 atm in Neapoli

For us it is known that the state suppresses the internal enemy when it returns a share of the violence of power and criminalizes friendly and comrade connections.