Kassel,incendiary attack of the car park of the German army

On the night of Thursday to Friday of last week, two vehicles were completely burned in the district of Bad Willhelmshöhe in Kassel (Hessen region). The two cars that were completely destroyed by fire were two civilian vehicles belonging to the German army fleet, parked near the Bundeswehr technical school. The cops say the damage was in the mid-five figures. A small drop in the bucket compared to the huge sums currently being spent on rearmament.

Since all NATO member countries are required to spend at least 2% of their GDP on war preparations, spending on military and armaments products is skyrocketing in Europe. Since then, the German army has been subtly presented to us as an “antiquated troop, reduced to a pitiful size by cost-cutting” and “not fit for combat”. The aim is to convince the public that the huge investments in the military-industrial complex are justified and serve the security of Europe. When at the beginning of this year the war in Ukraine escalated again and the Russian ruling class sent its army to finish annexing the territories in the east of Ukraine that have been disputed for years, the calls for the necessary rearmament of Europe finally found complacent ears.

END_OF_DOCUMENT_TOKEN_TO_BE_REPLACED 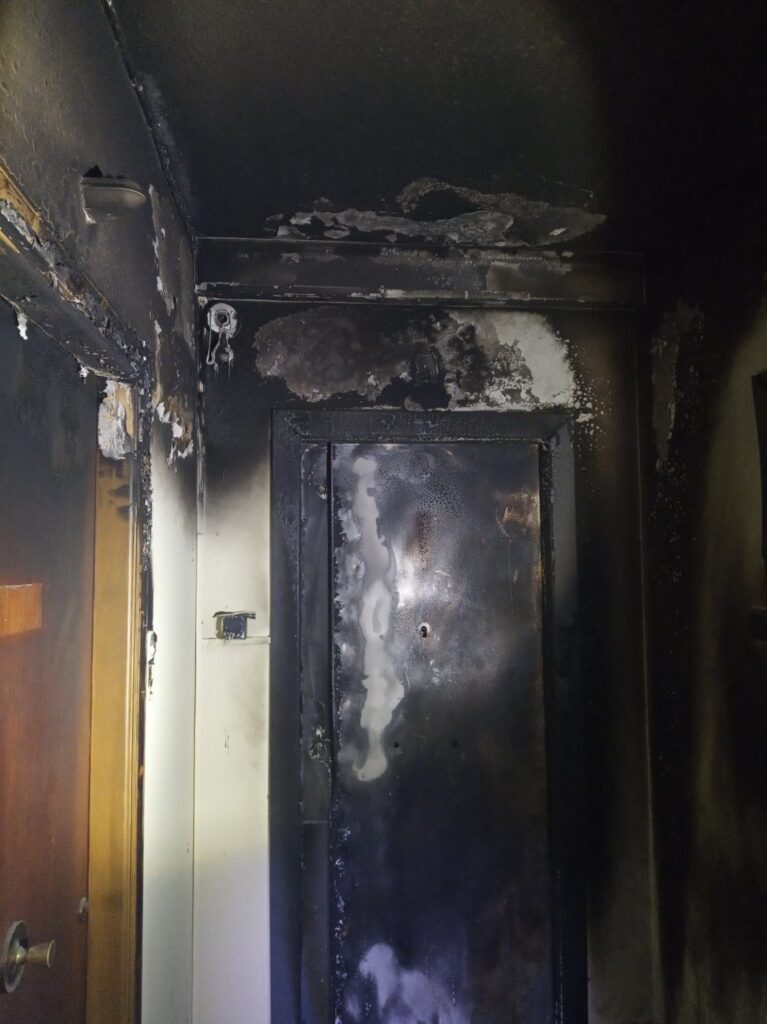 “The occupying government of Tsolakoglu literally annihilated my possibility of survival, which was based on a decent pension which for 35 years I alone (without state support) had been paying for it. Because I am of an age that does not give me the individual possibility to react (not excluding of course if a Greek would take the kalashnikov the second would be me) I find no other solution than a decent end before I start to look in the trash for my alimony. I believe that the young people with no future will one day take up arms and hang the national traitors upside down in Syntagma Square, as the Italians did to Mussolini in 1945 (Loreto Square in Milan)” Dimitris Christoulas*

We take responsibility for the incendiary attack on the political office of Adonis Georgiades, the representative of capital, politician responsible for the poverty and misery suffered by the people through poverty.

From the economic crisis of 2009 from which the country never came out, to the socialization of the losses of capital from the pandemic Covid 19, the latest increases in the price of electricity, fuel and almost all essentials are added to the already unbearable cost of survival of the working class and the people, to the pre-existing queues of the ΟΑΕΔ (Employment Insurance) , to the pension cuts, to the crumbs of the basic wage. The “development” invoked and evangelised by the domestic bourgeoisie is reflected physically and materially in people who die trying to keep warm, who look in the garbage for food, who commit suicide for economic reasons. It is reflected in workplaces that are graveyards for people of our class, where dozens of workers do not return home because a few extra euros were not “wasted” for the safety of the workers. Their growth translates into slow death in the corridors of hospitals. To the nearly 27,000 deaths from Covid 19, to the blockade of care in public hospitals amidst the increasing privatisation of the ΕΣΥ (National Health Service). Their deployment amounts to a daily battle for the survival of the next day for the majority of society at the same time as a handful of industrialists, shipowners and contractors continually speculate on our backs, reap the rewards of the toil and slavery we produce, extract surplus value from our starvation wages, continually devaluing the value of our labour power. END_OF_DOCUMENT_TOKEN_TO_BE_REPLACED

We take responsibility for the arson attacks that took place from March 2 to 14 in areas of Athens. Specifically

At dawn on Wednesday 2/3 we set fire to and destroyed a company van of AKTORA in Chrysostomou Smyrnis Street in Vyronas. On 1/4/2021 in Evia, the bodies of 3 dead workers were found hanging on the DEI poles and thrown lifeless on the ground at an AKTORA construction site. The murdered workers of the class war are not included in any official statistics, many times they do not even have a name, nationality, age. They are mere fuel and legalized collateral damage. Only proletarian organization and revenge can keep alive the memory of the murdered workers and our class hatred against their murdering bosses. Giannis Carlatiras, 43 years old, George Toskas, 55 years old, and Alex Brouka, 45 years old. stand next to the names of Antonis Dellios, Stamatis Diplaris, Giritlis Tzihat and many other local and migrant workers, all of them murdered on AKTORA construction sites, in our own accounts, in our own memory.

Let us realize that the organization of class revolutionary anti-violence was not, nor is it, a secondary dimension of workers’ action. It is on organised proletarian counter-violence, on the destruction of capital’s proletarian elements and the targeting of its cadres, on the wildcat strikes, that not only any “bargaining power” of the exploited masses is based, but also their very unity in the fields of class warfare. It is the resistance and attack of the workers against the bosses that unites the Class, not the bargaining for the material conditions of its simple survival.