In this umpteenth hearing in videoconference and after many requests, all denied, to appear and attend in person and not in absence to all the hearings of the trial that sees me charged, for the heavy and infamous accusation of massacre, I have to face the issue of videoconferencing, which enters, or to be more precise, was entering, in the infamous logic of the differentiation of the penitentiary circuits, in which the individual prisoner and accused is demonized and dehumanized by the said “considerable social dangerousness”. And I said that I was entering, because the videoconference, the trial in absentia, has been extended to all the prisoners in Italian prisons, who have been left without a real defense and with the marginalization that all this implies for all the defendants who suffer this imposition, through a liberticidal dynamic of the umpteenth emergency, this time for the Covid-19 emergency, which then became law. It is known, it is already evident and unmasked – and I am not only talking about the contradiction of this problem especially, or of one law or another – how the specific problem of the videoconference has reduced the defense to be a farce, annulling in fact the defendant within the trial.

This court will probably say that this has nothing to do with the trial taking place today.

But I believe it does, and what is more, I believe it is a fundamental issue. I am talking about the contradiction that the States possess by their own systemic nature, the fundamental problem is the disintegration and degeneration that dresses itself as emergentialism, and has the objective of breaking and directing the consolidated and ordinary legality at will, transforming it into another legality. We see it with the same dynamics of the perpetual emergency, and the specific plan of the videoconference is only an example of how the systemic authoritarianism liberticidal system expands in a capillary way. It is the exception, the emergency of today, that forges the law of tomorrow, reducing it more and more. The trials by videoconference, that is, in absentia, have been established by the continuous emergencies within the said social dangerousness, which is already the norm, such as the trial by videoconference for all the prisoners in Italian prisons. And it is not that this does not have repercussions on the real conditions of the entire trial, since it hinders the management of a real defense of the accused, creating a contradiction with what your own democratic and bourgeois law argues.
END_OF_DOCUMENT_TOKEN_TO_BE_REPLACED 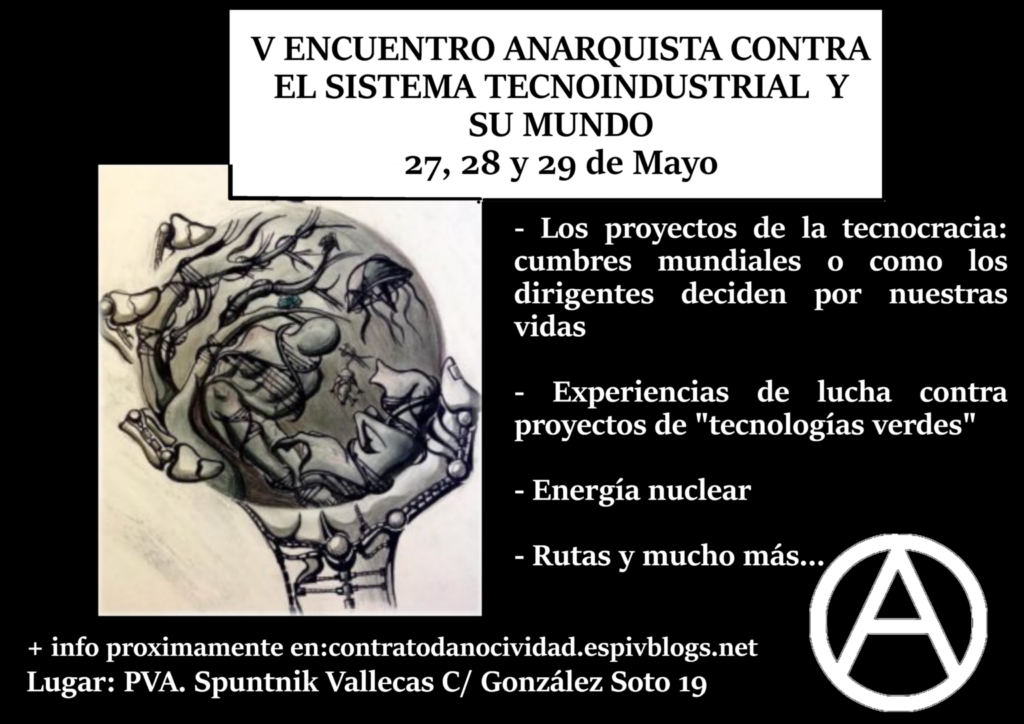 V ANARCHIST MEETING AGAINST THE TECHNO-INDUSTRIAL SYSTEM AND ITS WORLD

During the 27th, 28th and 29th of May will take place the “V Anarchist Meeting against the Technoindustrial System and its world”. A place where we can meet, get to know each other, debate, spread and sharpen our ideas against the technical organization of the world. We intend the meeting to be one more tool to fight the techno-scientific-industrial system, because we think that the field of confrontation should be concentrated in the field of technological progress, since it is and will be what will trace the present and future dynamics of domination over each and every one of the aspects of our lives: social, political, economic and environmental. During the duration of the conference there will be a space for distributors (those who want to set up a distributor in the space are kindly requested to confirm their presence in advance) and 100% vegetarian canteens. In the coming days we will disseminate the full program of the meeting, which this year will be held at PVA Sputnik (C / Gonzalez soto, 21, Vallecas, Madrid).

Historically, the systems of domination have taken advantage of moments of crisis or catastrophe to transform the world, to carry out a metamorphosis of it. In other times this metamorphosis was carried out when capitalism was threatened by the advance of the class struggle or by the need for economic and productive changes to maximize profits. In our time we see how technocracy takes advantage of emergencies, be they energetic, sanitary, economic, climatic… to accelerate the techno-totalitarianism that the machine-world implies. A new “great transformation” is underway, driven by the techno-financial elites, a Great Reset. Restarting life in all its dimensions to impose a new way of life and a new world under the imperatives of the 4th Industrial Revolution, that is, restarting life to submit it to the machine-world that seeks to optimize the human being and all living things to turn them into just another cog in the machine-world. Once nature has been artificialized and controlled, the objective now is the human being. END_OF_DOCUMENT_TOKEN_TO_BE_REPLACED