We know that the road to a world without prisons, without authority, requires much reflection and action.

Reflecting on how to solve our problems of today and tomorrow from an anarchic perspective, without falling into authoritarian logics and turning them into action in the different environments we inhabit is a challenge.

END_OF_DOCUMENT_TOKEN_TO_BE_REPLACED

On Friday 17/9/21,  at 1pm on the 6th floor of the Loukareos Street Courts, the second degree trial of comrade Marios Seisidis continues for the armed robbery of the National Bank of Solonos Street in 2006.

During the perpetrators’ escape, the state dogs did not hesitate to shoot into the crowd, resulting in the wounding and arrest of anarchist Yannis Dimitrakis. Subsequently, Marios and Simos Seisidis and Grigoris Tsironis were declared wanted and later put on bail for 600.000 €. After almost a decade on the run the 3 wanted comrades were arrested in different places and times. Simos lost his leg to a cop’s bullet in Tauros  area in Athens, Grigoris was arrested in Volos during a raid by the SWAT team (during which Spyros Darvilas took his own life, free) and Marios in the Peloponnese together with Kostas Sakkas. Whereas Simos and Grigoris were acquitted in this case, Marios was sentenced in the first instance to 36 years’ imprisonment as the state mafia had already been irreparably damaged by the acquittals of the other two on the run. With this trial the circle of this case is closing and we must defend the legacy of resistance and solidarity that he leaves, as well as the comrade himself so that he does not remain at the mercy of state repression. Solidarity is our weapon.

EVERYONE AT THE COMRADE’S SIDE

NO HOSTAGE IN THE HANDS OF THE STATE

Besançon (Doubs) : It’s not just their techno-surveillance tools in our lives, it’s the lice too 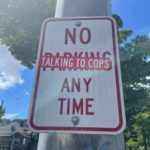 As 5G is deployed, the fight against this controlling society continues apace. Attacks against telecommunication antennas or companies involved in them also continue: in France, more than a hundred sabotage actions have been carried out since March 2020. Enough to piss off this capitalist society and the state that protects it. The repressive wave knows no truce, and the cops use all the technological surveillance tools at their disposal to try to repress and stifle any hint of revolt.

Since last year, about thirty people have been raided, indicted or imprisoned for sabotaging cell towers. This is the case of Boris, a fellow anarchist who was sent to prison in Nancy in September 2020 for burning two of them in Jura, and is now in the hospital following a fire in his cell. In a letter written from prison, he mentions the devices used by the cops and gendarmes to spy on his daily life during the investigation: imsi catcher suitcases, cameras in front of a home, GPS under the cars of people close to him, live listening and geolocation, GIGN undercovers (from Versailles) following him around and staged in hideouts, requests for placing microphones in a home and in the wall of a park where he regularly met friends, discreet seizures of beer bottles left in public spaces,…

END_OF_DOCUMENT_TOKEN_TO_BE_REPLACED 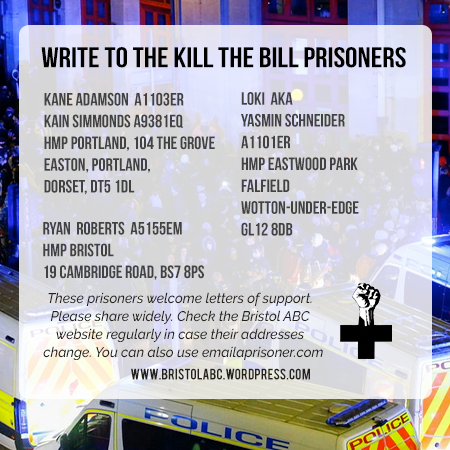 On Friday 30th July, five people were sentenced to over 14 years between them. Four people were given sentences of over three years for riot.

These five people are the first to receive custodial sentences for the confrontation with the police outside Bridewell Police Station at the Kill the Bill demonstration on 21st March. However, over 75 people have been arrested, 28 of them have now been charged. Two people are currently on remand in Horfield prison.

END_OF_DOCUMENT_TOKEN_TO_BE_REPLACED 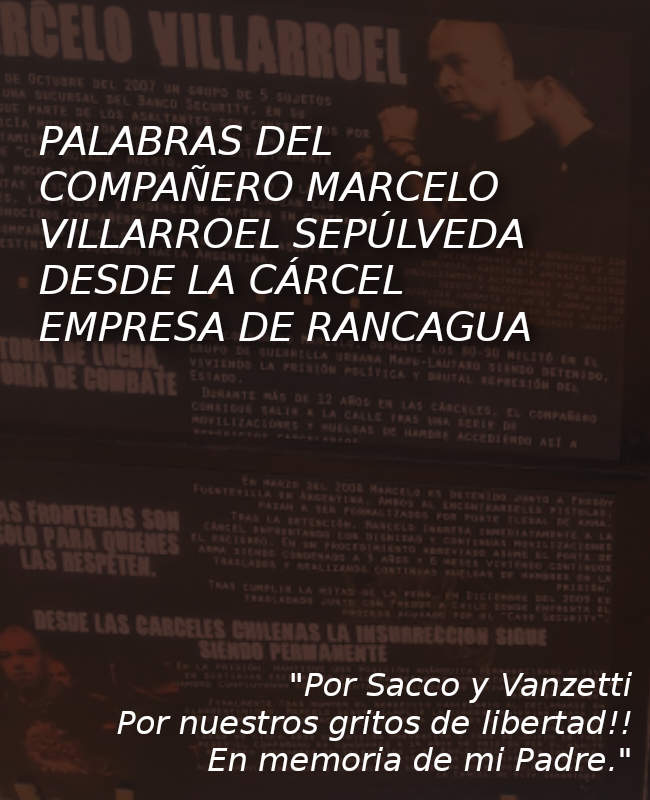 “If we are warriors let this condition be expressed in jail and in the streets and never be defeated by fear, silence and even less by repentance.”

For Sacco and Vanzetti

For our cries for freedom!!!

In memory of my Father.

More than 100 years ago the anarchists of action in some places of the world claimed to be subversives.

94 years ago were assassinated in the electric chair the insurrectional anarchist comrades of Italian origin Nicola Sacco and Bartolomeo Vanzetti on August 23, 1927 after a trial that lasted 7 years, 4 months and 17 days.

END_OF_DOCUMENT_TOKEN_TO_BE_REPLACED

Since October 2019, after my injury during the expropriation of a local state casino store in Cholargos (Athens), I went into a state of flight from the grid of preventive and penal repressive control. A consequence of my injury was the discovery of a set of illegal tools of resistance and the revelation of my relationship with the guerrilla organization Revolutionary Self-Defense. As an outlaw, I made public my political responsibility for the intended reconstruction of the guerrilla struggle, starting with the example of the organization Revolutionary Self-Defense. Reversing the condition of political isolation of the one who escapes from extortionate conventions, an isolation that the state pursues and which in turn serves the state (wherever it may come from), I participated to the maximum in the public dialogue of the movement, with a view to the evolution of the revolutionary class struggle.

The period of exile was a transitional attempt to reposition myself in the global socio-political space of the resistance with the aim of fleeing forward. At first, the breach of the embedded obstacles was not achieved. I remained trapped in an isolation related to the collective impasses of the Greek movement.

END_OF_DOCUMENT_TOKEN_TO_BE_REPLACED

Terrorists and bandits are the States & capitalists

On 12 June 2019, the anarchist comrades Kostas Sakkas, Giannis Dimitrakis and Dimitra Syrianou were arrested during an anti-terrorist operation in Thessaloniki. The comrades were abducted with summary procedures and taken to the GADTH (ΓΑΔΑ) where they were isolated for hours, hands tied behind their backs and hoods on their heads. The anti-terrorist operation concerned the attempted expropriation of a money transport to supply the ATM machine located inside the AHEPA – a case for which the comrades were taken before the prosecutor on charges of robbery with conspiracy for Gannis and Kostas and simple complicity for Dimitra. At the same time, searches were carried out in houses both in Thessaloniki and Athens and dozens of personal belongings of both the arrested and some of their friends were seized. At the end of the interrogation process, the first 2 comrades were remanded in custody while the third comrade was temporarily released under restrictive conditions.

From the very first moment the media, in close cooperation with the cops and the judges, began slandering our comrades. Engaging in yet another headhunt, they constantly reproduced photos of comrades Sakka and Dimitraki, and through scare stories prejudged the arrested. They spewed mud and bile for supposedly having struck a new cell that would be supplying money to the urban guerrilla, at the reappearance of the revolutionary fund and the robbers in black, in order to socially legitimize not only the comrades’ arrest but the repression in general against acts of revolutionary solidarity such as expropriation.

On 16/9/19 they were sentenced in the court of first instance, G. Dimitrakis to 11.5 years , K. Sakkas to 7 years and 10 months and 2 years to D. Syrianou. On 6/9/21 our comrades will be brought once again bound and imprisoned into the halls of the bourgeois justice system where the court of appeal of the case is being heard, for the choices of struggle they have made over the years, for all these choices that constitute the whole of the tools of confrontation and struggle with the State and capital. In the face of this new repressive blow, we will all stand proudly with our comrades.

Freedom to comrades G. Dimitrakis and K. Sakkas who are inprison for the expropriation of the money transport at AHEPA.

No one alone in the hands of the State 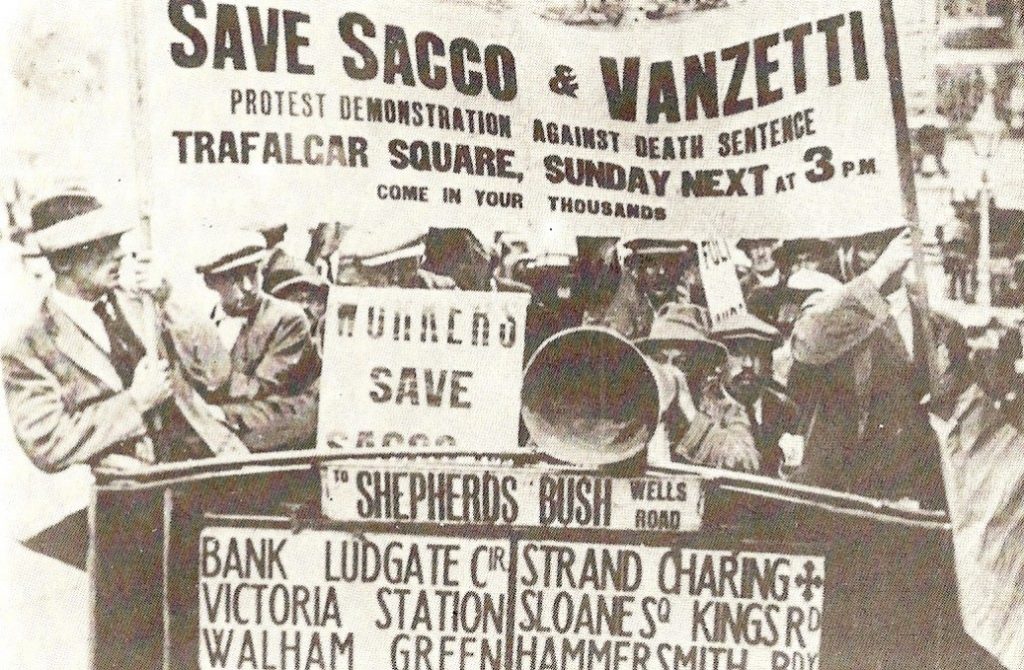 In this week of solidarity with the anarchist prisoners, we make an open call to war, to continue and intensify the conflict against each expression of Power and to strengthen the ties of affinity for combat between all the anti-authoritarian sectors that exist and walk common paths.

It is from this position that we remember our comrades Sacco and Vanzetti as part of the broad sector of anarchic illegalism, who were called “the Galleanists”, who with bombs, expropriations and executions shook the North American soil at the beginning of the last century. Sustained in the creation and multiplication of affinity groups and in violent action, the illegalists expanded anarchic ideas from the facts, understanding that word and action are inseparable.

Since then, a lot of water has passed under the bridge, many have died and many comrades have been imprisoned who proudly have faced Power from the place where they have been, despite the ideas that translate into affinity and these actions have endured and are what today motivate the anarchist and subversive prisoners of the territory dominated by the Chilean State to continue the war from this confinement and in the streets, always keeping in mind the necessary harmony between prisoners and supportive accomplices who walk in confrontation with the normality of what exists.

END_OF_DOCUMENT_TOKEN_TO_BE_REPLACED

via: publicacionrefractario.Translated by Act for freedom now!

We invite you to participate in the Evening of Internationalist Solidarity with the prisoners in struggle in Chilean prisons to be held on Friday, August 13.

Since we understand the social struggle as a set of practices that involve reflection, projection and offensive action against the state-capitalist system, as well as the moral and economic support of our comrades repressed by the State and its prison system of annihilation, we believe it is essential to become familiar with the situation of our comrades in prison and to take an active part in internationalist solidarity.

END_OF_DOCUMENT_TOKEN_TO_BE_REPLACED 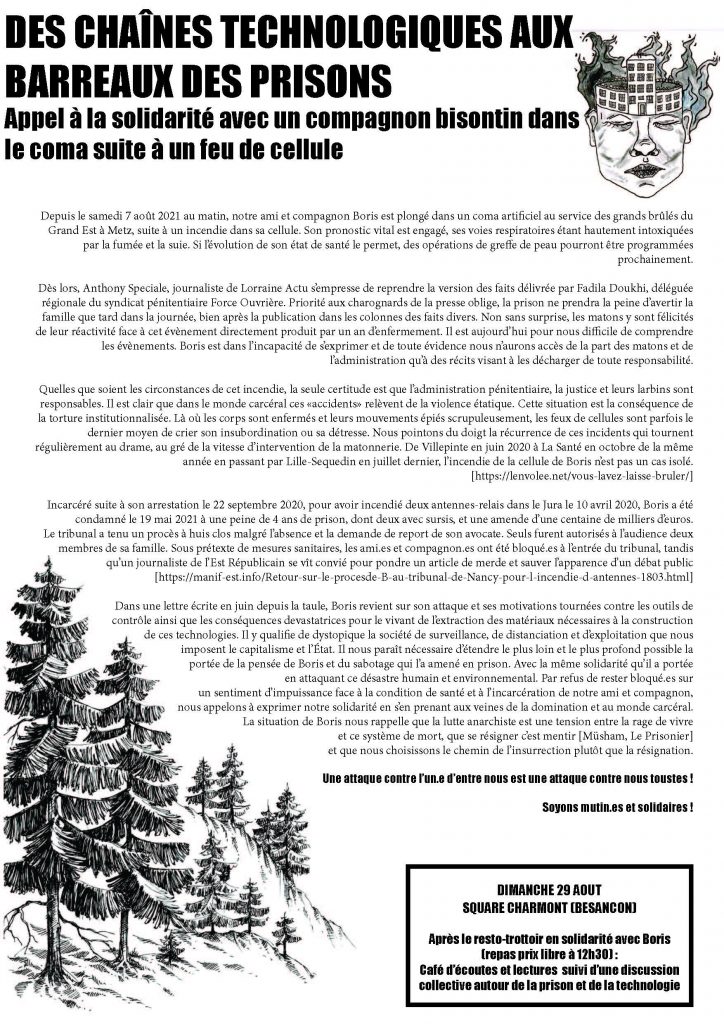 From technological chains to prison bars: call for solidarity with a Bisontin comrade in coma following a cell fire

After the meal in solidarity with Boris (free-contribution meal at 12:30): coffee and readings followed by a collective discussion about prison and technology