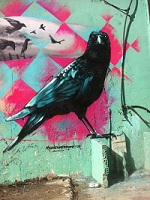 Anarchist Ivan Alocco has ended the hunger strike (France, December 1, 2022)
Ivan, incarcerated in Villepinte prison (near Paris), lets us know that he has ended his hunger strike. Today, December 1st, he started feeding again, after 35 days of hunger strike in solidarity with Alfredo Cospito’s struggle.

He is well and sends a strong hug in solidarity to Alfredo, Juan, Anna, Toby and everyone outside the prisons.

On Thursday, November 24th, during the interrogation by the investigating judge, Ivan made a brief statement and then said he had nothing to declare in response to the judge’s questions. His statement, as far as we know, was more or less this:

END_OF_DOCUMENT_TOKEN_TO_BE_REPLACED

Bologna, 1 December gathering at Court of Surveillance in solidarity with Alfredo and with all the revolutionary prisoners 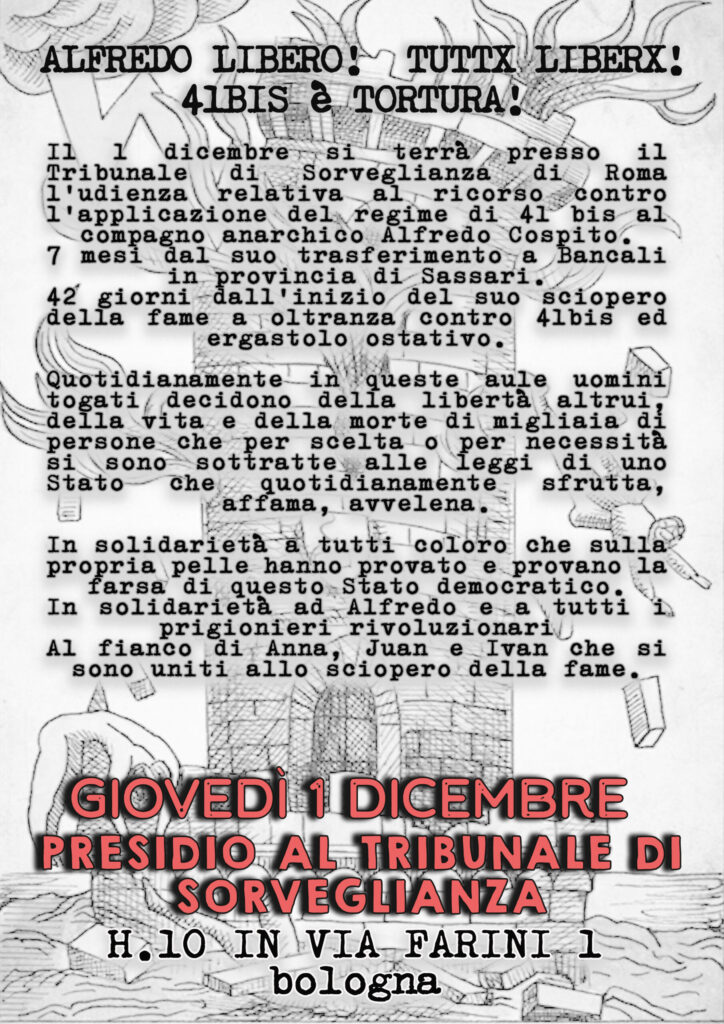 On December 1st the hearing on the appeal against the application of the 41bis regime against anarchist comrade Alfredo Cospito will take place in the court of surveillance in Rome. 7 months after his transfer to Bancali in the province of Sassari [Sardinia]. 42 days after the commencement of his indefinite hunger strike against 41 bis and life sentence without appeal.

Every day in these courtrooms, men in togas decide on the freedom of others, on the life and death of thousands of people who, by choice or by necessity, have escaped the laws of a State that daily exploits, starves, poisons.

In solidarity with all those who have experienced and are experiencing the farce of of this democratic State.

In solidarity with Alfredo and all the revolutionary prisoners.

At the side of Anna, Juan and Ivan all united in hunger strike.

The re-examination of the 41 bis measure against Alfredo is set for 1 December. This hearing will be very important because it will have to pronounce on the legitimacy of the previous Justice Minister Marta Cartabia’s decision to apply the 41 bis prison regime against our comrade.
END_OF_DOCUMENT_TOKEN_TO_BE_REPLACED

News has reached me of the isolation torture inflicted on Alfredo Cospito who has been hit with the 41bis regime of the Italian State and placed into the hell of the White Cells.

My heart aches to hear of the conditions he is suffering and I am in solidarity with his indefinite hunger strike.

END_OF_DOCUMENT_TOKEN_TO_BE_REPLACED 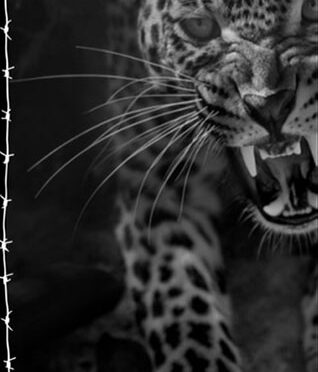 Hello to all and everyone,
I am writing these few lines to give you some news.

I am continuing the hunger strike I started on October 27, in solidarity with Alfredo Cospito’s struggle to get out of 41 bis. I am doing well. I feel tired and sometimes dizzy, but my determination remains intact.

This is the first time since June, since I’ve been locked up here, that I feel like I’m doing something worthwhile, instead of simply surviving and watching time go by. Two weeks ago, the head warden threatened to transfer me to solitary confinement if I continue with the hunger strike (” for my own good, to be better looked after in case I have a sudden health problem “), but so far he has not put his blackmail into practice.

My mail is blocked again. They gave me letters on October 24, then nothing more. Likewise, the letters I have written to my family since mid-October have still not arrived.

On Thursday, Nov. 24, at 1:30 p.m., I will appear before the investigating judge (Anne Grandjean), at the Bobigny court, for questioning.

END_OF_DOCUMENT_TOKEN_TO_BE_REPLACED 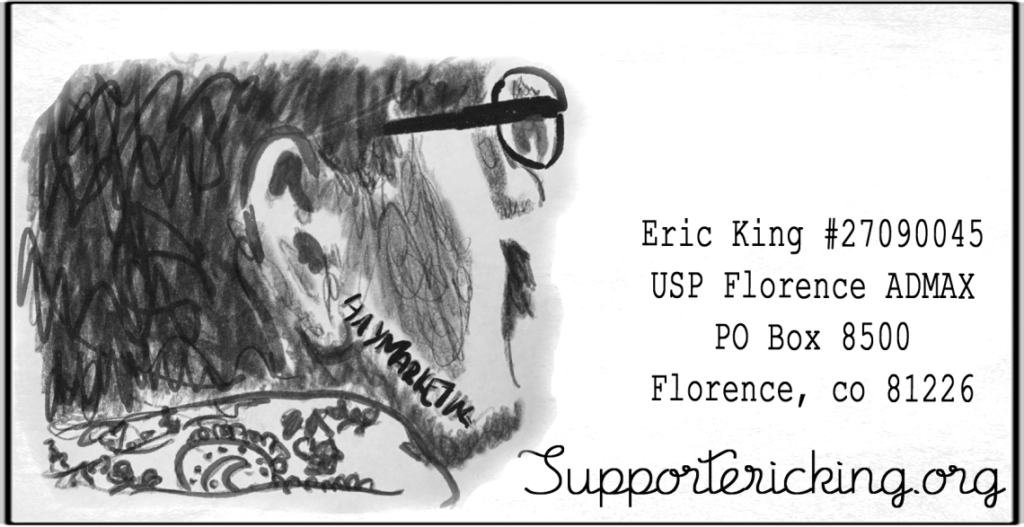 Hello friends, comrades, and government Nosey Nathans! I’ve been in ADX for about two months now and wanted to give a little update and talk over what things are like here.

This prison, more than any, exist to break spirits and disrupt connections to the real world. It was built specifically for that purpose. The isolation here is on a very deep level. There are days that pass where I literally speak to no one and hear no one else. Some folks have decades here; imagine if you can. It’s brutal and sickening. This entire joint is a psychological war zone.

We are given TVs, which is cool, but you can get lost in them. It’s very easy to give up on fitness, mail, reading, and live in the screen. That is 100% what they want, digital social control, screen shackles. I do lots of jogging in place when a show is on, lots of movement. I’ve been in the SHU the last 4 years, most of that time without radio or books let alone a TV. That time was brutal as shit but it did teach me how to set a routine, and to get by on very little…that’s also easy for me to say knowing I’ll be out in approximately 10 months, having done one year here…many don’t have an outdate, or mail, or books coming. This is their life and those NOT swallowed by desperation are some of the strongest people imaginable.
END_OF_DOCUMENT_TOKEN_TO_BE_REPLACED

Life is not so good/ Claim of action

In the early morning hours of November 19 to 20 november a van of the multinational company LG (life is good) in Kaisariani, was boarded up. Life is good only for the bosses and the rulers of this world. For us it becomes good only in moments like this, when we act. We dedicate this attack to the Turkish fighters who are on hunger strike demanding a fair trial and to comrade Alfredo Cospito who is on hunger strike against the 41bis regime.

via: athens.indymedia  Translated by Act for freedom! 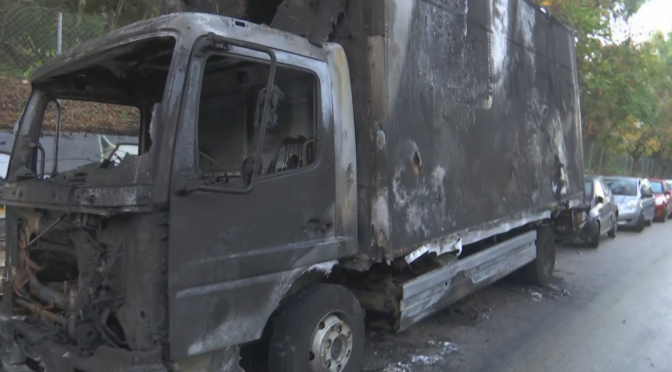 Taking responsibility – Against the war industry

In the days of commemoration of the Polytechnic, we must not forget the anti-militarist implications of the uprising. In the midst of military dictatorship, one of the central slogans of the occupied Polytechnic in ’73 was “Out with NATO”. Picking up this thread, anarchy today must find a way of direct action against those who profit and gain from these wars.

While we try to develop anarchist considerations and analyses of every interstate war conflict, one of the most important aspects of the multifaceted anti-military struggle is often ignored: sabotaging the death machine on the ground we are on.

Since we are in NATO’s territory of influence, we have a duty to sabotage everything used by the armed forces of the Greek state and its allies, the arms industry, the financiers and those who give orders and make decisions.

END_OF_DOCUMENT_TOKEN_TO_BE_REPLACED

During their trial in a special court, they were not allowed proper interpretation, the testimony of defence witnesses was interrupted several times by the court, they were attacked by the cops inside the courtroom and on 17 July 2021, they were sentenced to 33 years in prison each one, the main charge of participating in a “terrorist organisation”.
END_OF_DOCUMENT_TOKEN_TO_BE_REPLACED 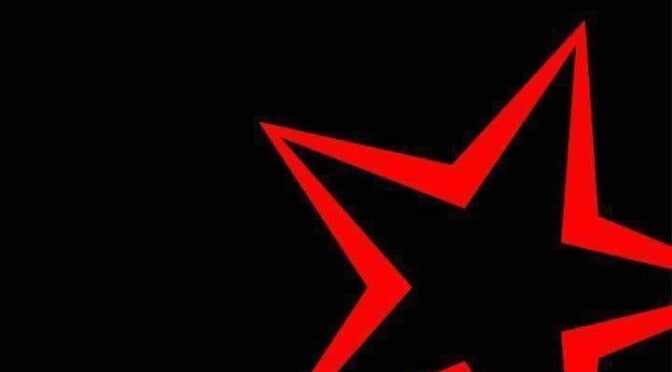 The physical and moral extermination of revolutionary fighters and political prisoners, or the coercion of them into political renunciation and repentance, has been the goal of the State and capital throughout time. In order to achieve this aim, States have created special conditions of detention and isolation for those who took up arms against the regime, for those they call “terrorists”.
One example of special detention today is the Italian model under Article 41 bis. Under Italian law, the Minister of “Justice” is given the right to lift the rules of treatment of some prisoners and order their transfer to special conditions of detention. The special conditions based on Article 41 bis impose complete social and sensory isolation, limiting contacts with other prisoners, limiting visits to one (1) per month with relatives, not by physical contact but through a glass partition, limiting, prohibiting, correspondence and the possession of books, shrinking prisoners’ exercise period to one (1) hour per day and increasing the time of confinement inside the cell.
These conditions are a form of torture aimed at crushing militant prisoners and in general those under this regime.

Anarchist comrade Alfredo Cospito, who is convicted for actions of the Informal Anarchist Federation (FAI-Informale), has been under this regime since May 5, 2022 in Bancali prison (in Sassari) in Sardinia on orders of the former Minister of “Justice” Marta Cartabia. The comrade has been on hunger strike against the solitary confinement regime since 20th October.Three comrades have also been on hunger strike in solidarity with comrade Alfredo, Juan Sorroche since October 25th, Ivan Alocco imprisoned in France since October 27th and Anna Beniamino since November 7th.
This repressive policy of States using special conditions of detention is something that has been going on for decades and has developed and grown.
END_OF_DOCUMENT_TOKEN_TO_BE_REPLACED