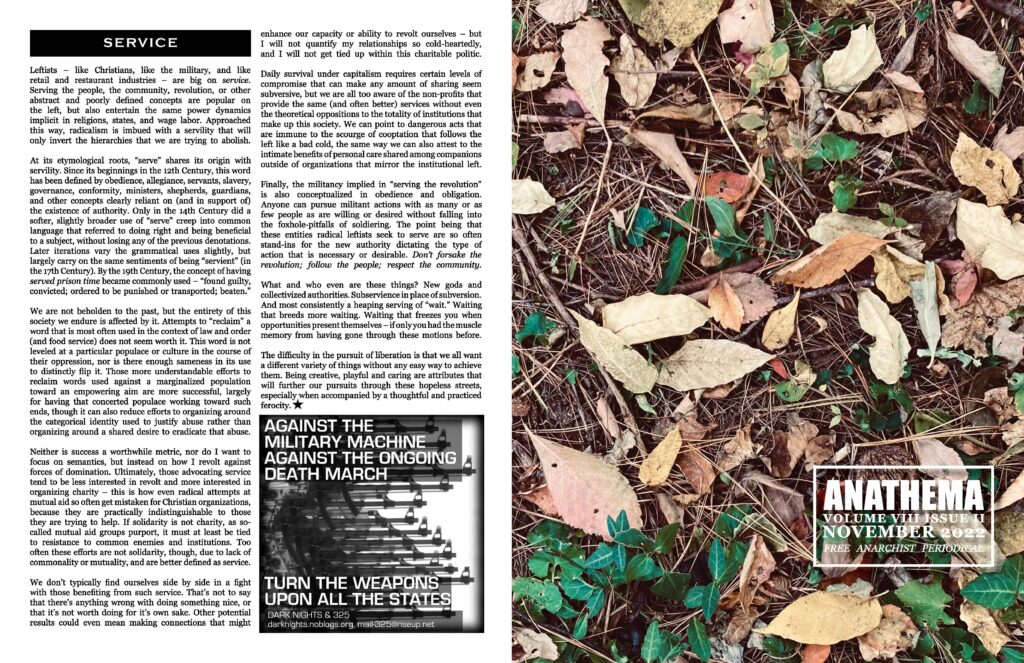 What Went Down
Interviews from the Meadows
Alabama Prison Strike
The Social and Survival: On Becoming a Threat
When One Door Closes….Break It In: Thoughts on the Criminalization
of Abortion
The Conscious Soldier-Brother: Puerto Rican Struggle
Cospito on Hunger Strike
Service 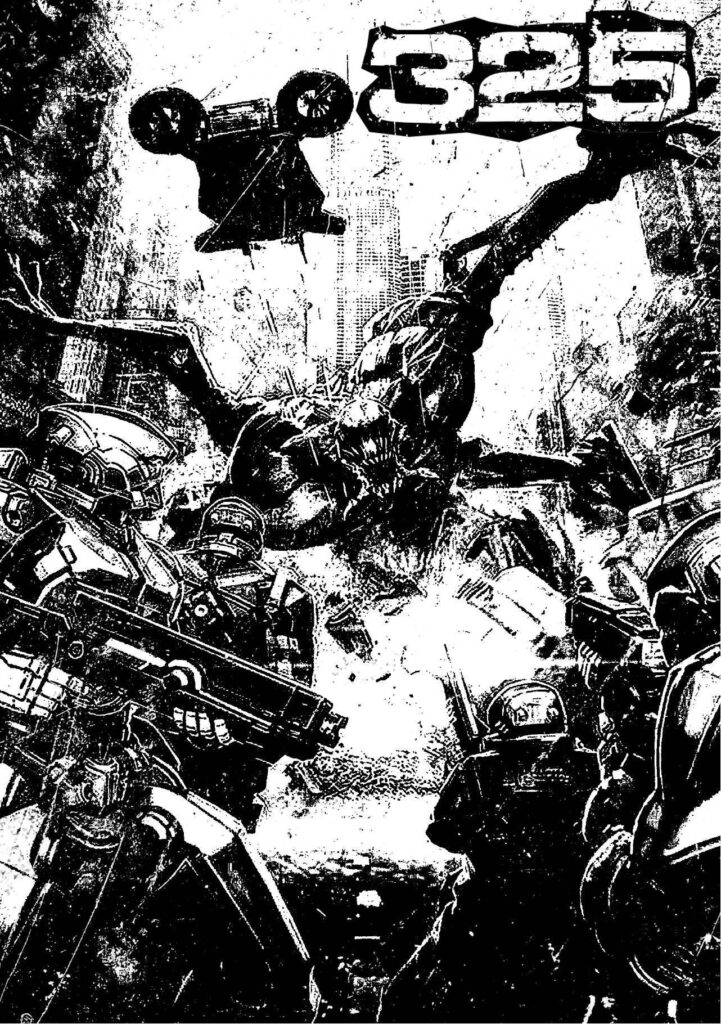 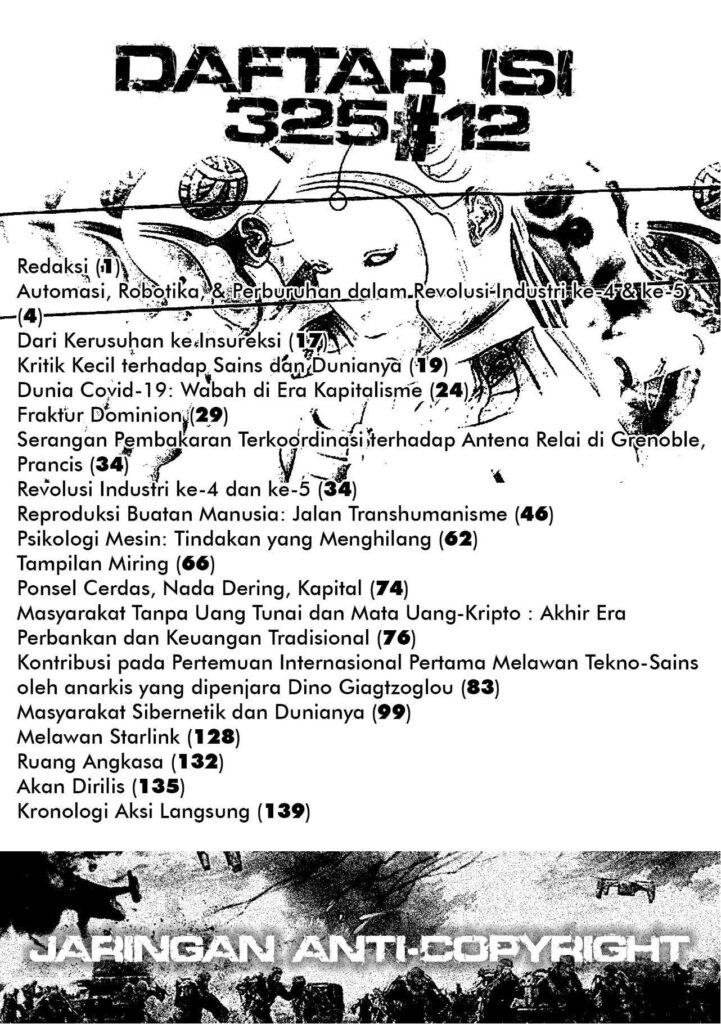 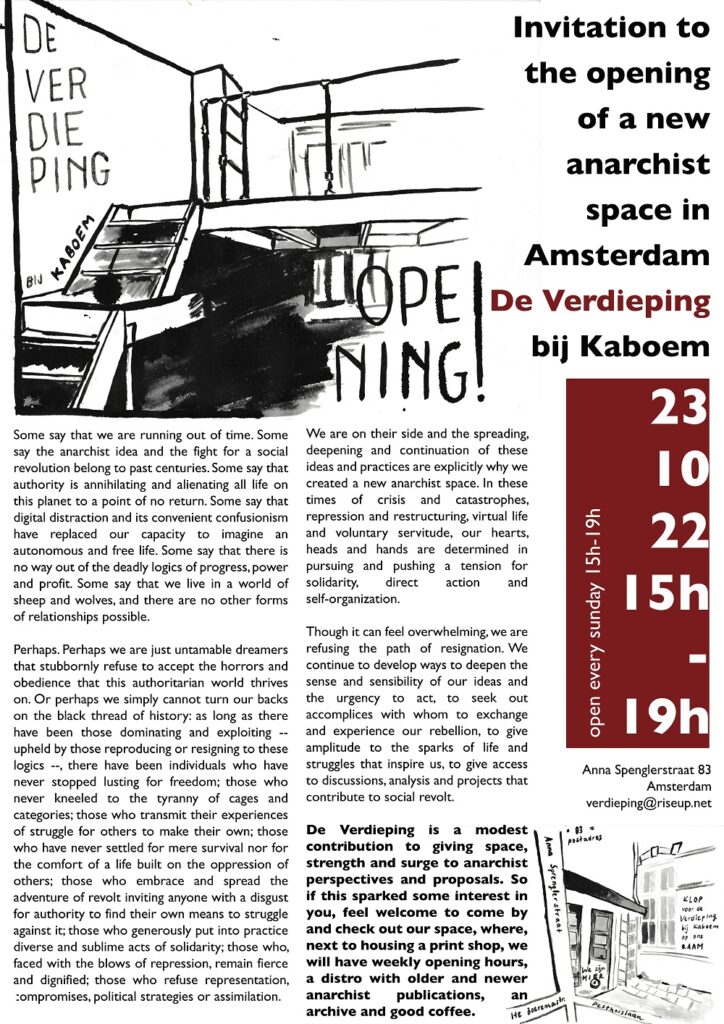 Anouncing the opening of a new anarchist space in Amsterdam ‘De
Verdieping’ at Kaboem.

Some say that we are running out of time. Some say the anarchist idea and the fight for a social revolution belong to past centuries. Some say that authority is annihilating and alienating all life on this planet to a point of no return. Some say that digital distraction and its convenient confusionism have replaced our capacity to imagine an autonomous and free life. Some say that there is no way out of the deadly logics of progress, power and profit. Some say that we live in a world of sheep and wolves, and there are no other forms of relationships possible.

END_OF_DOCUMENT_TOKEN_TO_BE_REPLACED

The horizon of events. Incendiary thoughts scattered over the last drops of fuel of capitalism

Here the english translation of the article by Lunanera, “L’orizzonte degli eventi. Pensieri incendiari sparsi sulle ultime gocce di carburante del Capitalismo” (published in “Bollettino”, no. 7, Biblioteca dello Spazio Anarchico “Lunanera” and Archivio di Documentazione “Franco Di Gioia”, Cosenza, Italy, March 2022). The translation, made by “Act for freedom now!” (which we thank very much!), has been revised and corrected in some passages by some comrades and re-published online in “La Nemesi”.

END_OF_DOCUMENT_TOKEN_TO_BE_REPLACED 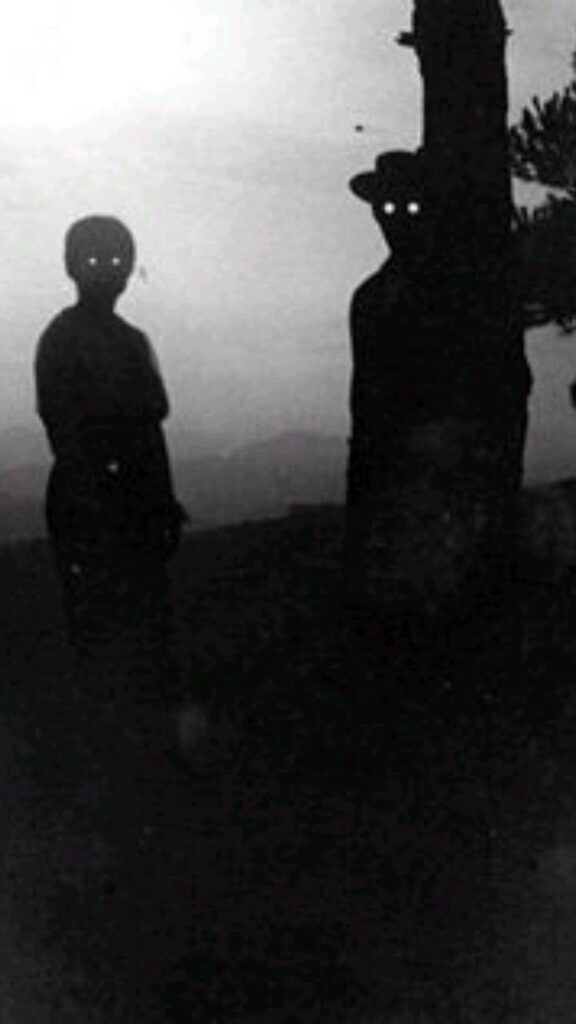 END_OF_DOCUMENT_TOKEN_TO_BE_REPLACED

That every metropolis fulfills all the criteria of a panopticon, well, that is not really saying anything new. The question becomes, which city has a higher density of surveillance technology at its disposal and how intensively is it used?

Therefore, it is obvious that Orwell’s ideas of a completely monitored society were accurate, but not in the dimension that he imagined, or the foundations for it. In particular, dictatorship is unnecessary, which for him would be an important basis of this complete surveillance, to bring it about. Complete surveillance is therefore not an expression of a specific system of capitalism, but it is inherent to its political administration and articulation, namely, the state. So it is a false dichotomy to think that complete surveillance would only be the result of a more “authoritarian” system. Such a way of thinking only feeds on the desire and ideology that the state in better hands could wear a friendly mask. We see this also in the midst of the debate about the corona virus, where leftist groups, but also anarchists, see the saber-rattling of the repression, the introduction of curfew, of quarantine, etc., as a protofascist development and do not want to understand that the state, no matter which – whether democratic or other varieties – always carries such mechanisms and powers (as a monopoly) to guarantee its survival. The political administration and the organization of the State always remains the same, only the criteria and the ideologies of the political forces in power change, this would no longer be a false dichotomy. The State has historically used all the means at its disposal to guarantee the smooth running of its business. The nation-state is therefore the logical consequence, as well as the class society, of capitalism and not the other way around.

We consider this important to say yet again because we never get tired of wanting to understand the basis of the state and capitalism in order to be able to destroy it in real terms. There are far too many foolish historical examples that show us what paths are taken when this is not clear from the beginning.

Now to the case of Mónica and Francisco

On July 24 [2020], Mónica Caballero and Francisco Solar were arrested in Chile. We have extensively dealt with their detention trial, which was broadcast live on television. This detention trial is in no way comparable to what we are familiar with in Germany or other EU countries. If we think about the fact that such a detention examination here lasts about 10 minutes, simply to clarify whether an accused person is to be remanded in custody because, for example, there is a risk of flight or a risk of collusion, this is apparently different in Chile. It is not clear to us if there is always a live broadcast on television, or if it is due to the covid measures.
END_OF_DOCUMENT_TOKEN_TO_BE_REPLACED

The loss of contact between the grassroots and the instruments that filter the executive’s decisions (parliament in the first place) would appear to be due to a lack of political agreements and insufficient balance of party forces, while in actual fact it is due to the worsening of the underlying conditions (price levels, unemployment, declining investment, lack of support for demand, imbalances between areas with unequal development, uncontrollable social tensions, disproportionate repression, regurgitation of authoritarian methods, inadequate methods of assemblear control, etc.). These conditions of malaise are transferred to the executive through representative structures which take on the character of a pulley of inefficiency or an instrument of control of the inadequacy of plans, precisely at a time when they are losing their original significance as the management of consensus. The paradoxical – and contradictory – case occurs where the very presence of the filter mechanism (parties and trade unions first and foremost) has a kind of induced effect that ends up blocking the executive’s ambitions to fly forward.
END_OF_DOCUMENT_TOKEN_TO_BE_REPLACED 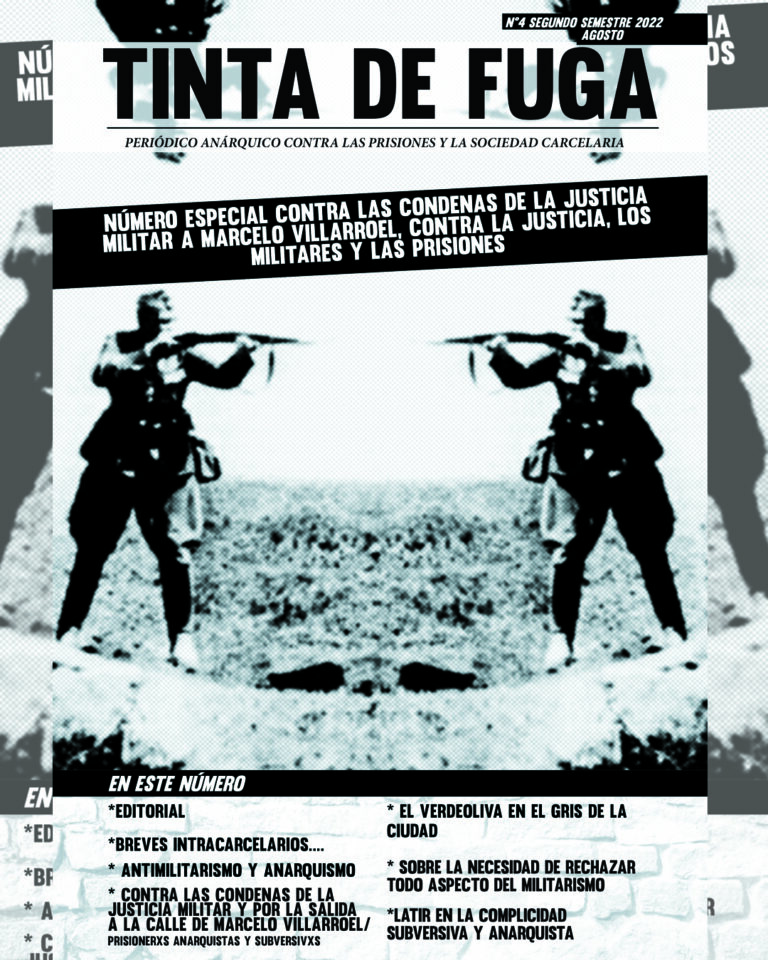 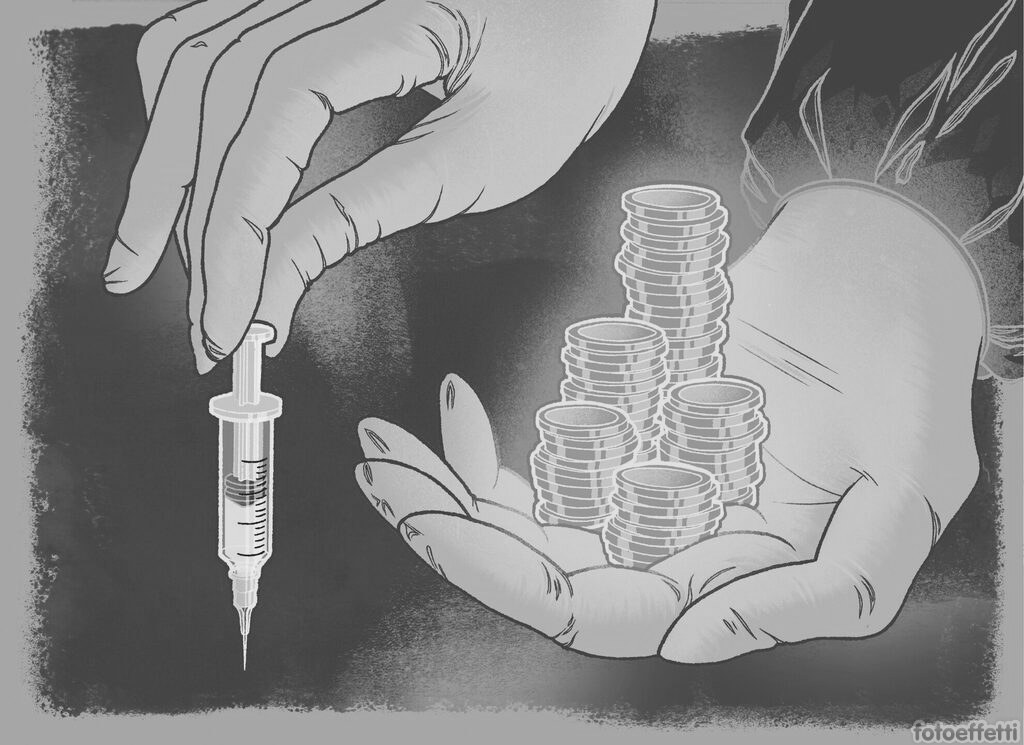