Call for a gathering in solidarity with the anarchist revolutionary hunger striker Alfredo Cospito, at the Italian embassy.

Until the demolition of every prison. For the anarchy in action.

Because for those who love life, to react when life and death are at stake is an act of duty. Anna Beniamino Alfredo Cospito, an anarchist prisoner of the “Scripta Manent” case -for the double attack on the carabinieri school in Fossano, signed by the FAI-RAT (Informal Anarchist Federation –Anonymous Chaotic Rebellion)- has been on hunger strike against the 41-bis regime since October 20th in Bancali prison, Sassari, Sardinia. Already on 5th May, after ten years of imprisonment, the state has chosen to reinforce the imprisonment of the comrade (who until then had made a significant contribution to the anarchist discourse with letters, articles and interventions) through the regime of article 41-bis (carcere duro), a law that, in essence, upgrades the imprisonment to a special solitary confinement even on an intellectual and sensory level. It is a suffocating condition that almost eliminates all communication and contact with the outside world, as a torture of psychosomatic extermination of the political prisoners, with the aim of forcing them into political “repentance”.

END_OF_DOCUMENT_TOKEN_TO_BE_REPLACED 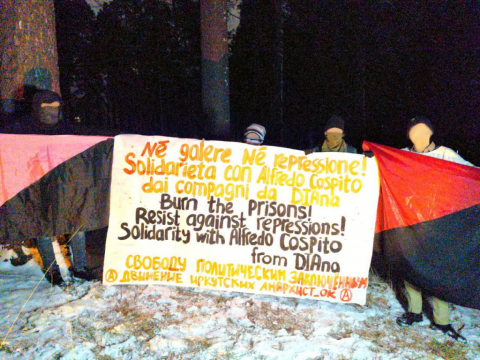 Alfredo Cospito is an Italian anarchist political prisoner, a member of the “Informal Anarchist Federation” (IFA).
Cospito was convicted for the attack on Roberto Adinolfi, general director of Ansaldo Nucleare, and was later sentenced to life imprisonment for the events of the night of June 2 to 3, 2006 at the Carabinieri Cadet School in Fossano (Cuneo), where two small bombs exploded, causing no death or injuries and no serious damage.
END_OF_DOCUMENT_TOKEN_TO_BE_REPLACED

The re-examination of the 41 bis measure against Alfredo is set for 1 December. This hearing will be very important because it will have to pronounce on the legitimacy of the previous Justice Minister Marta Cartabia’s decision to apply the 41 bis prison regime against our comrade.
END_OF_DOCUMENT_TOKEN_TO_BE_REPLACED

Solidarity from Nusantara as known as Indonesia for comrade Alfredo Cospito who is on a hunger strike against the 41-bis prison regime.

For you, comrades, stay strong and be a burning fire for every
injustice, capitalist, and state!

Hello to all and everyone,
I am writing these few lines to give you some news.

I am continuing the hunger strike I started on October 27, in solidarity with Alfredo Cospito’s struggle to get out of 41 bis. I am doing well. I feel tired and sometimes dizzy, but my determination remains intact.

This is the first time since June, since I’ve been locked up here, that I feel like I’m doing something worthwhile, instead of simply surviving and watching time go by. Two weeks ago, the head warden threatened to transfer me to solitary confinement if I continue with the hunger strike (” for my own good, to be better looked after in case I have a sudden health problem “), but so far he has not put his blackmail into practice.

My mail is blocked again. They gave me letters on October 24, then nothing more. Likewise, the letters I have written to my family since mid-October have still not arrived.

On Thursday, Nov. 24, at 1:30 p.m., I will appear before the investigating judge (Anne Grandjean), at the Bobigny court, for questioning.

END_OF_DOCUMENT_TOKEN_TO_BE_REPLACED

Rome: Deutsche Bank windows smashed in solidarity with imprisoned anarchists on hunger strike against 41 bis and life imprisonment without possibility of parole

Trento – night of November 10/11 – Smashed the windows of the Deutsche Bank branch in the city centre. The wall writings ‘with Alfredo on hunger strike’ and ‘warmongers’ were left. Alongside Juan, Alfredo, Anna and Ivan. Strength! 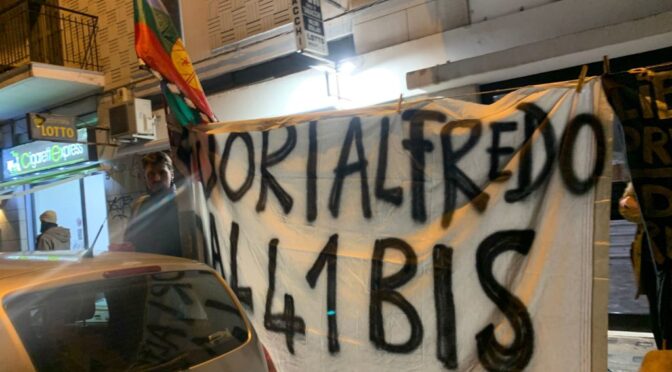 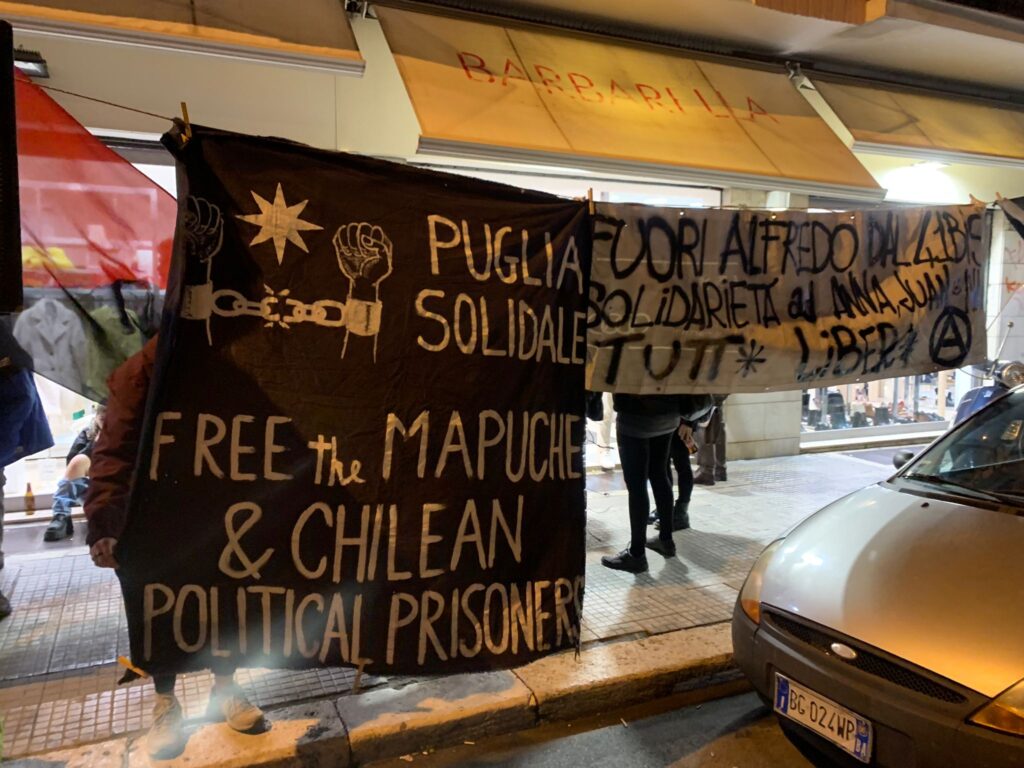 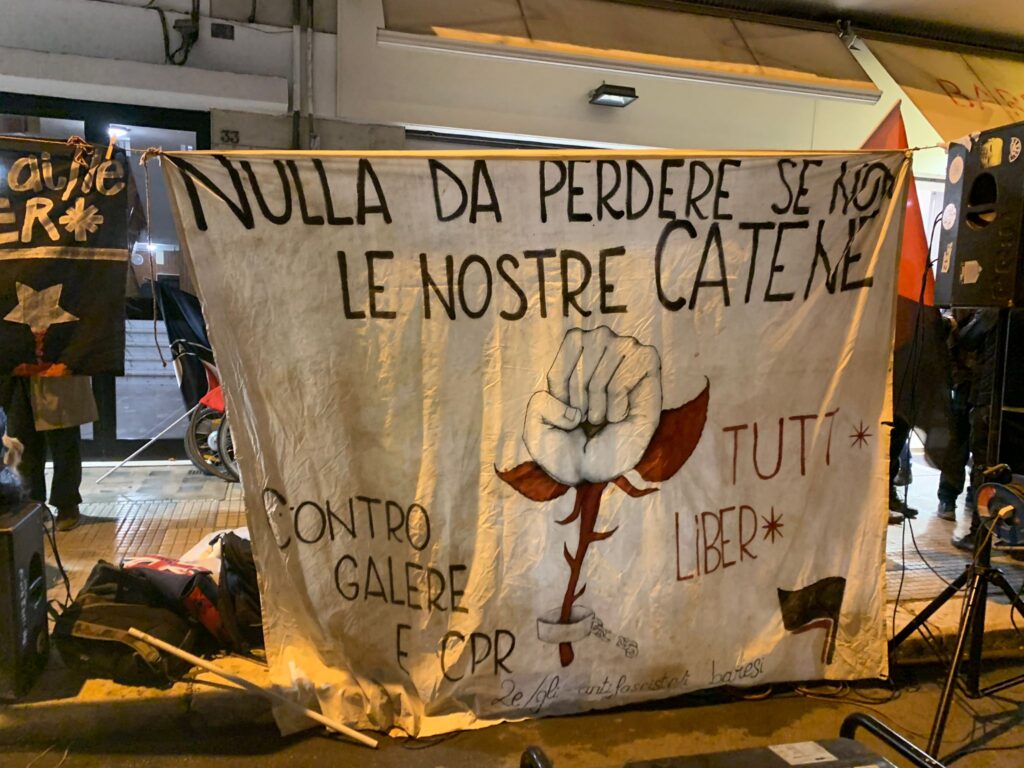 Bari,solidarity gathering at the prison

We receive and spread:

Wednesday 16th November a gathering was held outside the walls of the prison of Bari in solidarity with Alfredo Cospito and all the prisoners, against 41 bis and against all cages. To emphasise that 41 bis is State torture and that the struggle of our comrades on hunger strike is also our struggle.

ALFREDO OUT OF 41 BIS
FREEDOM FOR ANNA, IVAN AND JUAN
AGAINST ALL CAGES
EVERYONE FREE!

The decision for the extradition of Vincenzo Vecchi has been postponed to November 29th. This was decided today by the French constitutional council to which Vincenzo Vecchi, the comrade sentenced along with another 9 to over 100 years’ prison for the days of Genoa of 2001 and who for years had been living in France, had applied to suspend the extradition request.

END_OF_DOCUMENT_TOKEN_TO_BE_REPLACED 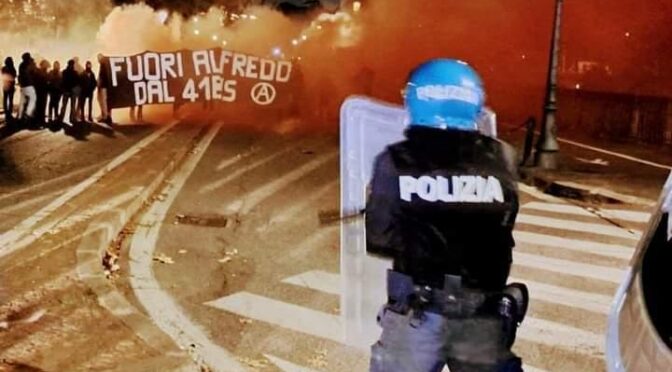 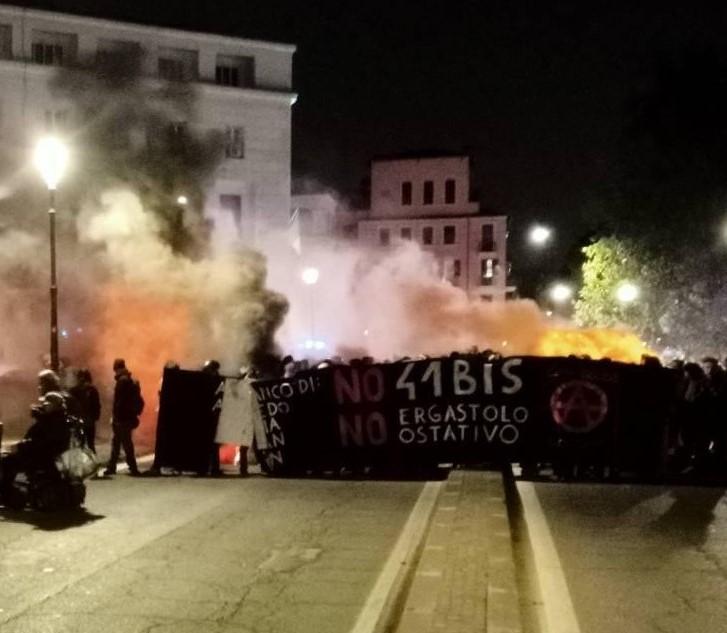 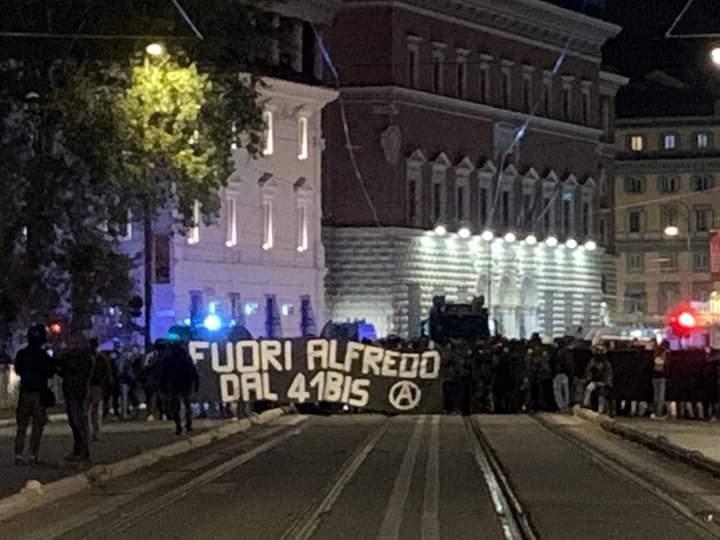 At the demonstration called for Saturday, November 12, various streets in the Trastevere district, in the centre of Rome, were blocked for more than four hours.

Approximately four hundred comrades marched in solidarity with Alfredo Cospito, Juan Sorroche, Ivan Alocco and Anna Beniamino on hunger strike against the 41 bis prison regime (to which Alfredo was transferred on May 5) and life imprisonament without a possibility of parole. There were moments of tension and clashes with the cops when the demonstration tried to move in the direction of the Regina Coeli prison.

Revolutionary solidarity with the imprisoned anarchists on hunger strike! Alfredo Cospito out from 41 bis! Close 41 bis! Freedom for everyone!

Athens, Slogans at the Italian embassy for the hunger strike of anarchist Alfredo Cospito 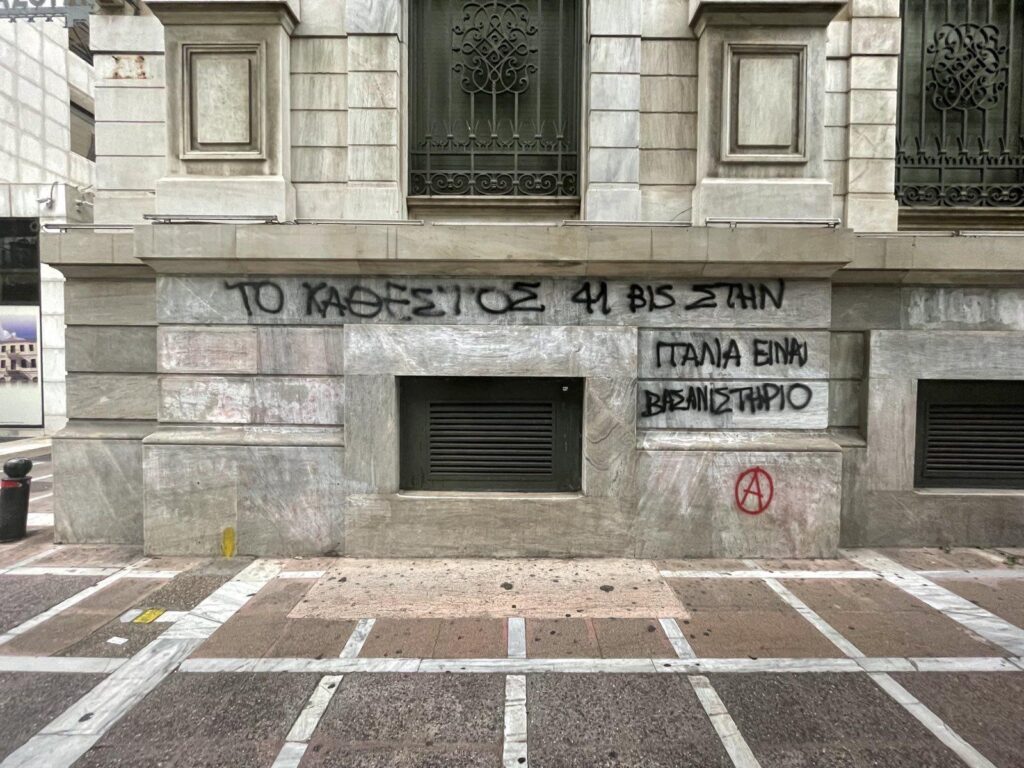 During the march for the anniversary of 17 November in the centre of Athens a slogans were written against the 41bis regime and in solidarity with Alfredo Cospito. One slogan was written on the historic building of the National Bank of Greece 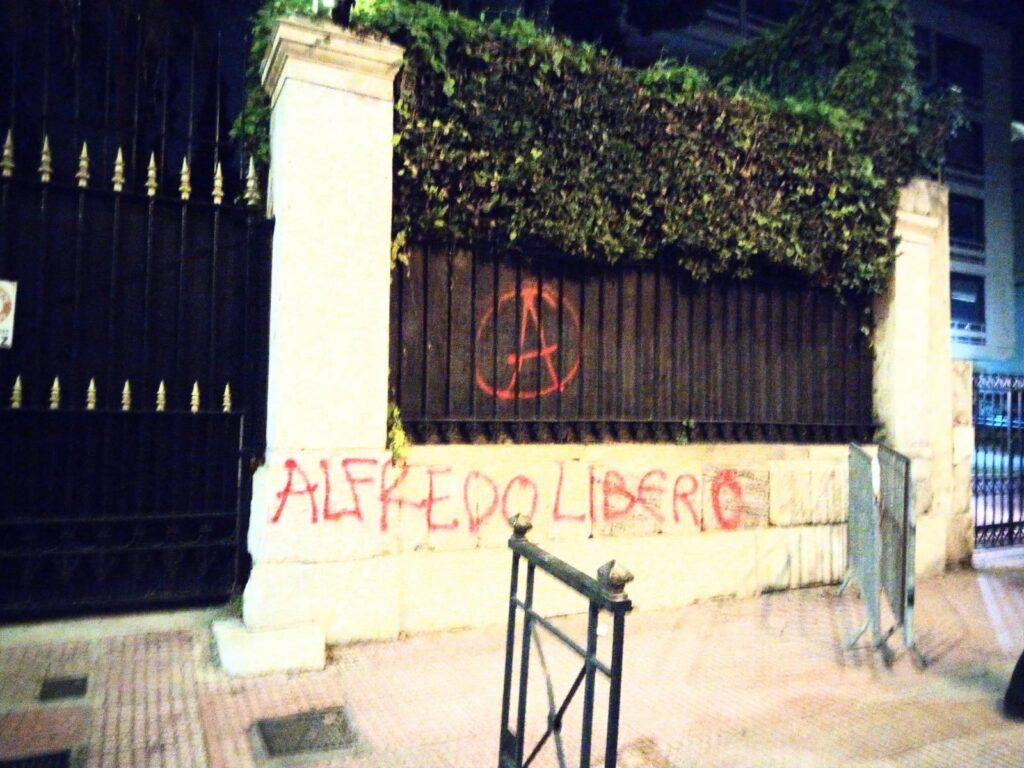 and the other one at  the Italian embassy, despite the suffocating presence of the riot police that followed the anti-authoritarian and anarchist blocks.

Gathering call at the Italian embassy on Wednesday 30/11 at 18.30 in Athens

THE 41 BIS REGIME IS TORTURE

UNTIL THE DEMOLITION OF THE LAST PRISON

Assembly of Solidarity with the prisoners, fugitives and persecuted militants