Translated by Act for freedom now! via: Anarchist Bure Cross 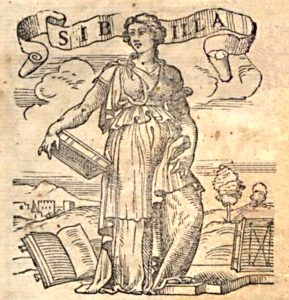 Rome, Taranto, Spoleto and Viterbo) and 6 companions were served with judicial surveillance warrants. Alfredo Cospito, already imprisoned in Terni, was given a preventive detention order (sic!). Michele, companion from Spoleto, has been placed under house arrest with an electronic bracelet. Four other companions are under various forms of judicial control (forbidden to leave the region they live in, obligation to report to the police station three times a week).

The comrades are charged with the crime provided for by article 270 bis (association with the purpose of terrorism and subversion of the democratic order), because of the design, printing and distribution, also by digital means, of the anarchist newspaper Vetriolo, as well as for tagging walls with content considered as incitement, in addition to a case of damage to property belonging to others. In addition, they are charged under art. 414 (provocation to crimes and misdemeanors), for the drafting and dissemination of communiqués with content inciting the commission of crimes against the State, with the aim of terrorism and subversion of the democratic order.

END_OF_DOCUMENT_TOKEN_TO_BE_REPLACED 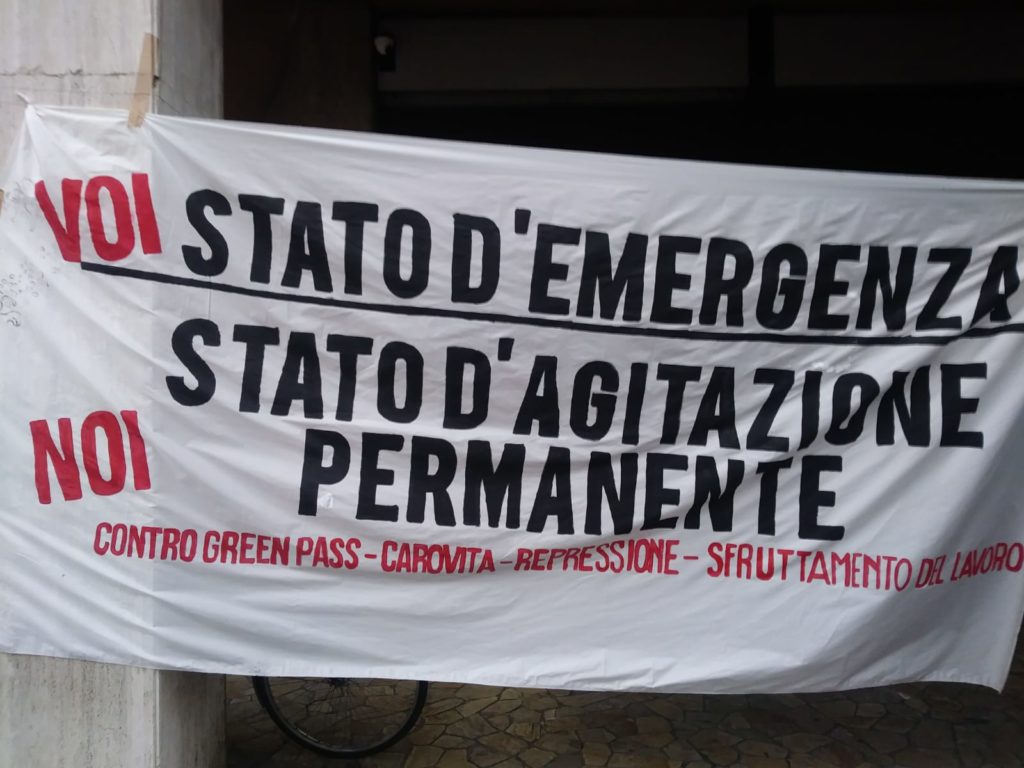 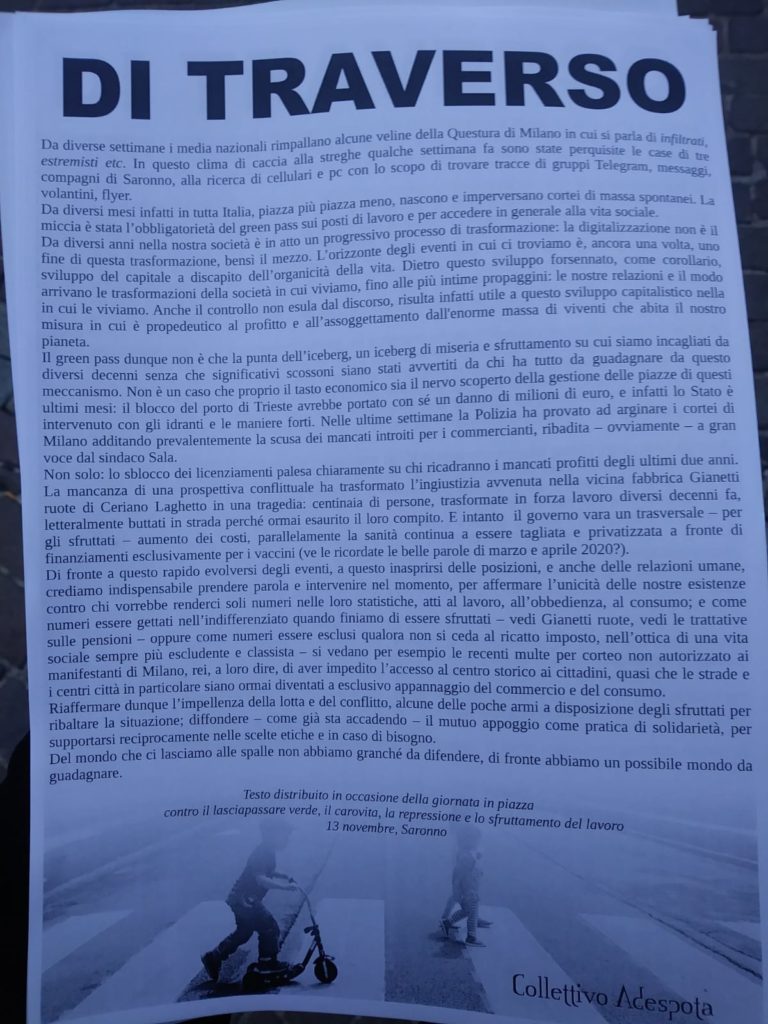 A text handed out on the day of protest against the green pass, price increases, repression and the exploitation of labour in Saronno on 13th November

THE WRONG WAY UP

For several weeks the national media have been reporting statements from the Milan police station talking of infiltrators, extremists, etc. In this witch-hunt climate the homes of three comrades were raided a few weeks ago in Saronno, in search of mobile phones and computers, with the purpose of finding traces of Telegram groups, messages, leaflets, flyers.

In fact, for several months spontaneous mass demonstrations have been forming and spreading in almost all the city squares in Italy. The fuse was the compulsory green pass to access workplaces and social life in general.

END_OF_DOCUMENT_TOKEN_TO_BE_REPLACED 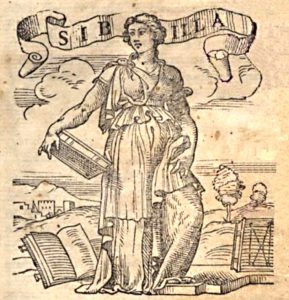 Following the Sibilla repressive operation of November 11, 2021, against the anarchist paper ‘Vetriolo’, the websites roundrobin.info and malacoda.noblogs.org were subjected to preventive seizure, in an attempt to block the online reading of articles published in the paper and others that the repressive forces believe were written by the investigated comrades.

The two websites are blacked out in Italy, so in order to visit them in this country you need to use TOR or a VPN. Solidarity with the comrades arrested, investigated and searched. 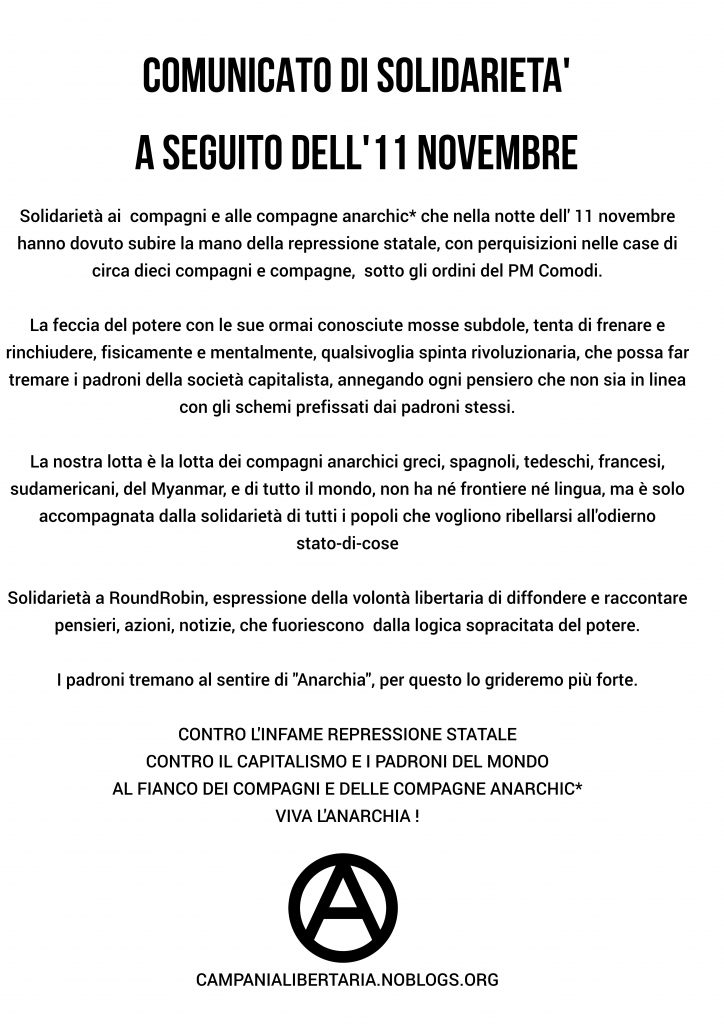 Solidarity with the anarchist comrades who in the night of 11th November had to endure the hand of state repression, with raids on the homes of about ten comrades on orders of prosecutor Comodi.

Using its by now well-known subtle moves, the scum of power is attempting to impede and lock up, physically and mentally, any form of revolutionary impulse that can make the bosses of capitalist society tremble, stifling all thought that is not in line with the schemes arranged by the bosses themselves.

END_OF_DOCUMENT_TOKEN_TO_BE_REPLACED 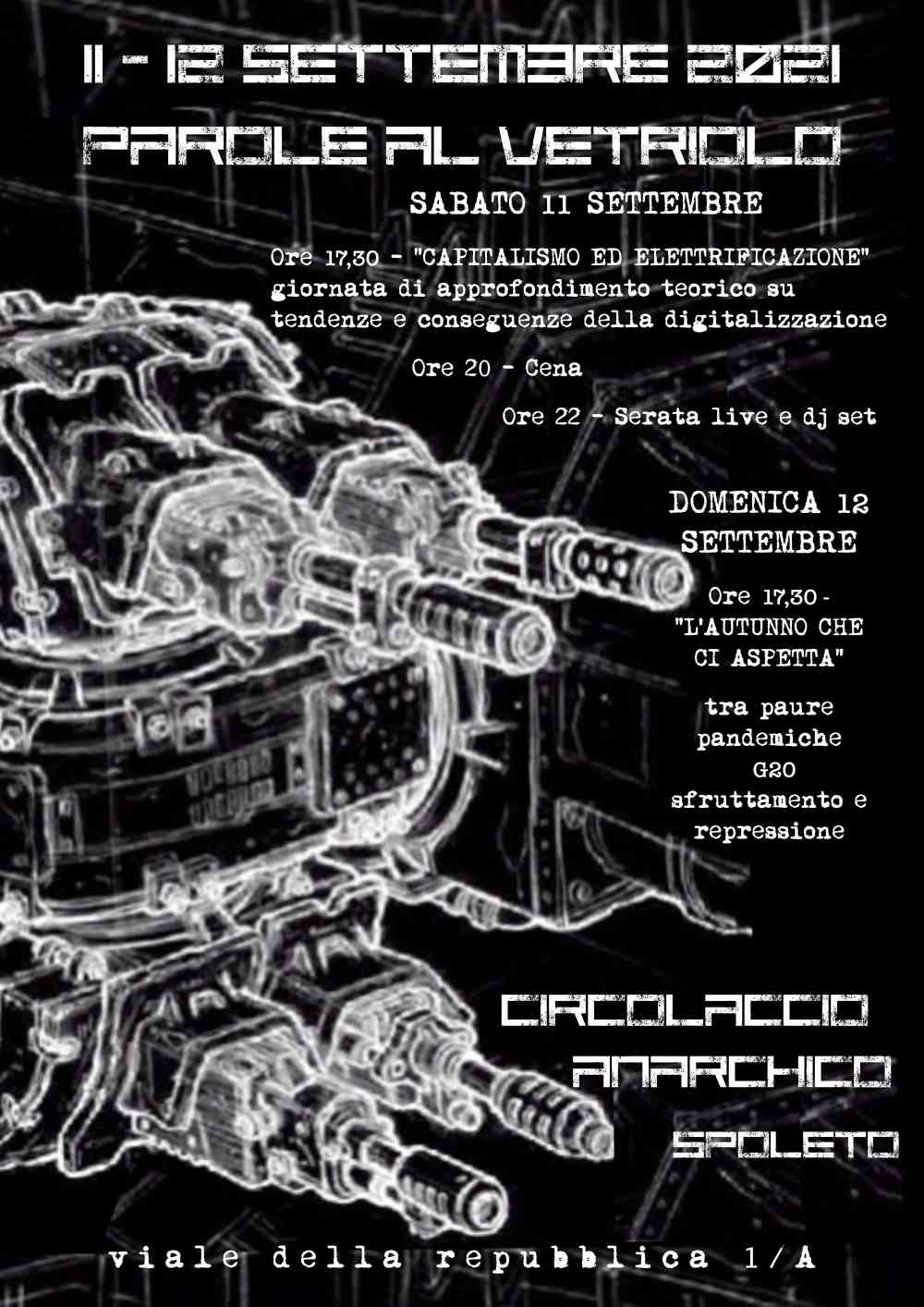 This text is a contribution to the discussion of the same name, “Capitalism and electrification”, which will take place at the Circolaccio Anarchico in Spoleto on 11th September in the context of the initiative “Vitriolic words” (“Parole al vetriolo”) . The two-day will involve a “theoretical day” (Saturday 11) and a “practical day” (Sunday 12), where we’ll talk about how to organize ourselves in the autumn. The following text wants to be the contribution of some comrades to the theoretical day.

In the current organization, as monopolists of science who remain such beyond social life, scientists certainly form a caste of its own which presents many similarities with the caste of priests. Scientific abstraction is their God, living and real individualities are the victims and scientists are their consecrated and licensed sacrificers

They say “ideology” too soon

For at least thirty years the dominant narrative has fobbed us with “the end of ideologies”. According to the “thinkers” of the palace, the collapse of countries under State Capitalism would have inaugurated a new era, the one that the philosopher Francis Fukuyama (1992) calls “the end of history”. Therefore history would be to be intended as a linear development where the democratic and liberal State represents its telos, the ultimate Goal of evolution beyond which it is impossible to go. It is the principles of liberalism that dictate evolution, marked and pushed by the force of rationality.

As this state of “perfection” is attained, ideologies make no sense either. The clash between opposed and alternative visions of the world is irrational and counterproductive, technical reason decides what is right and what is wrong, the only thing we can do is to follow rationality. Therefore any deviation would be absurd.

In a contradictory way, Fukuyama thinks that this final stage of human evolution is the democratic State. What he couldn’t foresee is that precisely by virtue of the rational domination of technique, the very democratic constitution would soon become obsolete. If there is nothing to choose, if the best thing to do is the most rational one… Another world is impossible!

END_OF_DOCUMENT_TOKEN_TO_BE_REPLACED 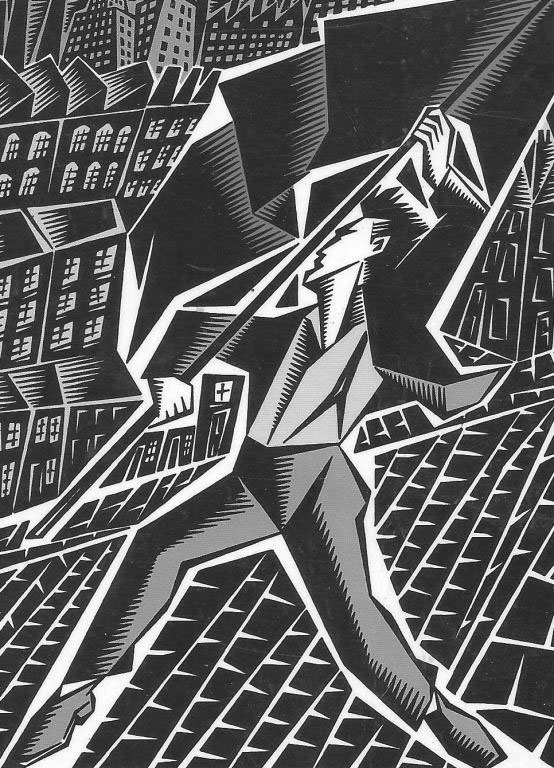 In expressing our solidarity with the comrades raided, investigated and subjected to precautionary measures in operation “Sibilla”, we are going to make some considerations (pending a more precise analysis from those who have the police-judicial papers of the investigation).

If the framework of “subversive association for the purpose of terrorism” has been repeated incessantly for the last forty years, the increasingly frequent accusation of “incitement to commit crimes” – aimed at striking anarchist and revolutionary publications, or even simply that which is non-aligned – informs us explicitly about the era we have entered. In the last month, in fact, there have been numerous searches carried out throughout Italy on this charge.

What for some decades had been mainly reserved for anarchists and antagonists is now becoming the norm, even for democratic dissidents. For example, there is already a certain qualitative difference between an expulsion order being imposed on a subversive and one imposed on a grassroots trade unionist “guilty” of taking part in a workers’ picket; and the difference becomes even more indicative if the person kicked out of a city is a dock worker who set up a stall in the square in the name of democracy and the Constitution. Just as it is quite different– in terms of the extension of the State’s coercive powers – if a city centre is banned for anarchist demonstrations following a demo with clashes and attacks on the power structures or if it is banned for peaceful demonstrations against the green pass, all on the basims of decrees passed in the name of “public health” or to protect shopkeepers’ “right” not to have their takings reduced.

END_OF_DOCUMENT_TOKEN_TO_BE_REPLACED

At dawn on 11 November, a number of searches were carried out in various Italian cities and six comrades were served with orders for precautionary measures: in prison for Alfredo, under house arrest for Michele, and an obligation to remain and sign three times a week for four other comrades.

The comrades are suspected of the crime of art. 270 bis (subversive association for the purpose of terrorism and subversion of the democratic order) for the conception, editing, printing and dissemination, including via computer and telematic tools, of the anarchist paper “Vetriolo“, for wall writings with content considered outrageous and instigatory and for an episode of damage. They were also charged with Article 414 (incitement to commit crimes), for drawing up and disseminating communiqués containing incitement to commit crimes against the State in person, for the purposes of terrorism and subversion of the democratic order.

In addition to this, two counter-information websites, roundrobin.info and malacoda.noblogs.org, were obliterated because they were considered an aggravating factor in the specific crime of incitement (through a digital instrument).

The investigation starts in the year 2017 in Milan, from the beginning of the newspaper’s editorial experience, then was passed to the Perugia prosecutor’s office until today, and reviews the content of the anarchist propaganda articles that are declared dangerous for their communicative effectiveness and the spreading of the radical idea.

END_OF_DOCUMENT_TOKEN_TO_BE_REPLACED 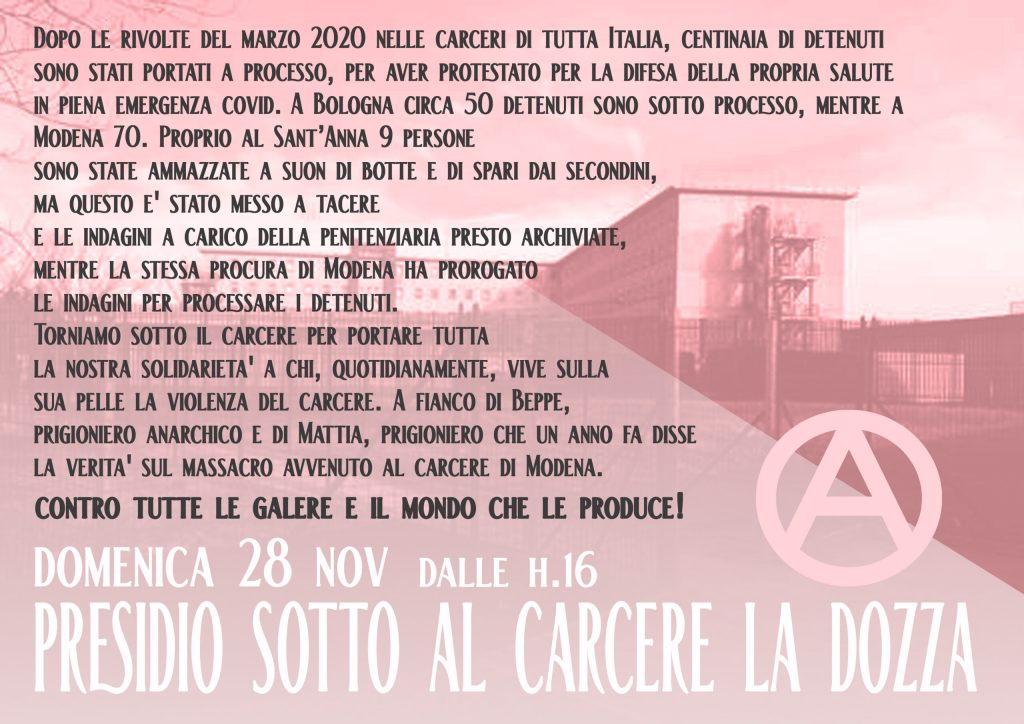 After the revolts of March 2020 in prisons all over Italy, hundreds of prisoners were put on trial for having protested in defence of their health in full Covid emergency. 50 prisoners are on trial in Bologna and 70 in Modena. Right in the Sant’Anna prison 9 people were killed by screws with beatings and gunshots, but this was covered up and investigations against the prison police were soon filed away, while Modena prosecutors extended investigations on the prisoners.

We are going back outside the prison to express all our solidarity with those who experience prison violence on their skin every day. Alongside anarchist prisoner Beppe, and Mattia, the prisoner who a year ago told the truth about the massacre in the jail of Modena.

AGAINST ALL JAILS AND THE WORLD THAT PRODUCES THEM!

Translated from Italian  by act for freedom now!

In order to break exploitation and oppression it is necessary that offended and crushed dignity turns into action because we firmly believe that “freedom” is not at all the right and duty to obey authority, it is not a life lived on one’s knees. Freedom – here and now – is in the conflict against all forms of power, in the wild desire for practical concrete destruction of authority.

At dawn on Thursday 11th November operation “Sibilla” [Sybil] kicked off, coordinated by Perugia and Milan prosecutors (Manuela Comodi and Alberto Nobili respectively), following which comrades were raided in several Italian cities. It was the ROS carabinieri (led by General Pasquale Angelosanto) who enforced measures ordered by investigating judge Valerio D’Andria, resulting in 6 anarchist comrades being subjected to custodial measures and investigated for instigation to commit crime aggravated by purposes of terrorism and subversion of the democratic order.