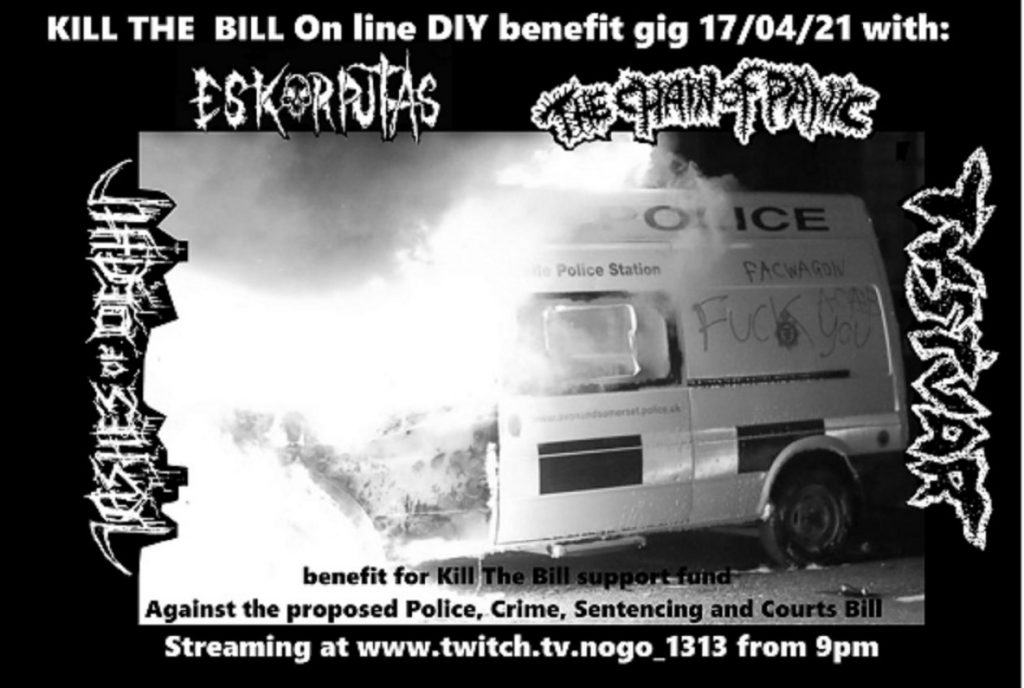 THE CHAIN OF PANIC, 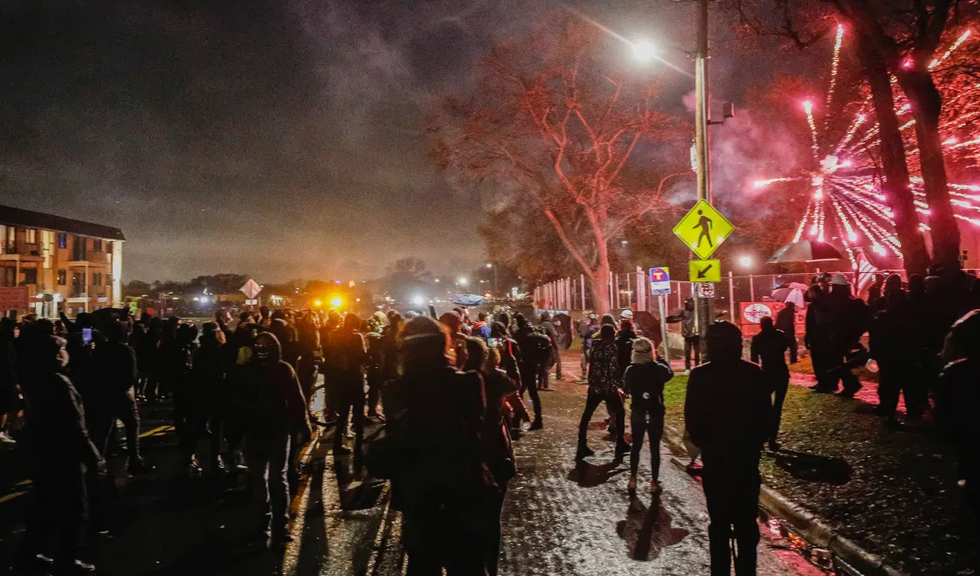 The Minnesota police murder of Daunte Wright reignited impassioned protests across many US cities Monday night — with a riot in Portland, Oregon, as hundreds attacked cops.

A second night of demonstrations boiled in Brooklyn Park, where the murder occured, while protesters gathered in other cities in a show of unity. Researchers were able to locate and publicly post the address of the pig who murdered Daunte, driving her from her home.

“Burn the precincts to the ground, in every city and every town!” chanted marchers in Portland.

END_OF_DOCUMENT_TOKEN_TO_BE_REPLACED

As a minimum indication of solidarity to the people arrested, tortured and jailed from the events of Nea Smyrni (initially, on 7 March midday at the ‘polis park’, the square and the park, but also afterwards, on 9 March with the pogroms in our neighbourhoods after the overwhelming river of people’s rage), we intervened with banners and paint in the areas of Nea Smyrni and Palaio Faliro, of Neos Kosmos and Agios Dimitrios. Throughout and against prohibitions, rifts of collectivization and explosions blossom.

Nobody alone in the hands of the State

Solidarity to the people arrested for the events of Nea Smyrni

Immediate release of the imprisoned

END_OF_DOCUMENT_TOKEN_TO_BE_REPLACED

Quale internazionale? published little more than a year after the publication of the third part of an homonymous interview with imprisoned comrade Alfredo Cospito in the anarchist paper Vetriolo, is finally available. This booklet, edited by Alfredo and the other comrades editors of the paper, is the expression of a 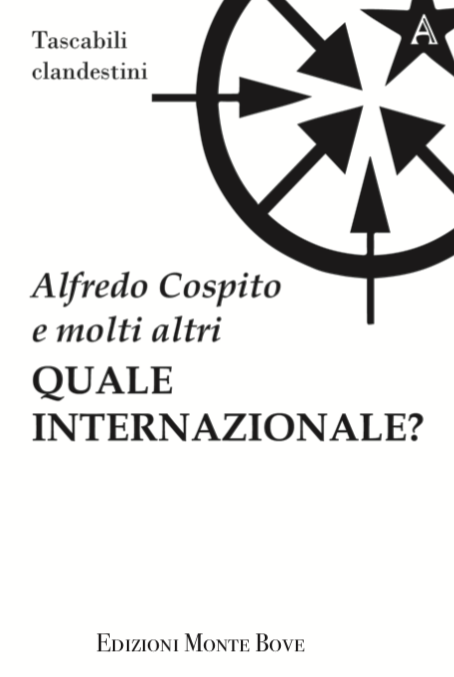 passionate trajectory of in-depth study and analysis and at the same time a cognitive and historical contribution for anarchism, a volume which we hope can bring about a lively involvement with anarchist ideas, drawing the attention of those who care for the destruction of this world centred on authority.

«Today just to publish a discussion on the practice of internationalist anarchist action, just putting together a chronology of the actions carried out by the Informal Anarchist Federation and some of their claims involves the concrete risk of ending up in prison for years. This pocket book has a great merit: it goes straight to the specifics of the Informal Anarchist Federation without any dissociating or demonizing prefaces. How is it possible that a phenomenon that involved (whatever one thinks of it) a consistent part of anarchism was never analysed in a serious, deep way, even less from a historical point of view? Perhaps it is time to face this piece of anarchy in a balanced way, without rancour. Perhaps to do otherwise would be demented because certainly it is not by mystifying or erasing pieces of history that don’t correspond to our fine printed theories that we will be able to affirm our anarchy in the world» – Alfredo Cospito.

END_OF_DOCUMENT_TOKEN_TO_BE_REPLACED

For a week we’ve been seeing with anger the State’s endless revenge, which changes between alternate declarations at times oozing false optimism and at others the cold brutal intention of extermination. But surprise is a luxury we can’t afford. It is obvious that you are trying to abdicate your responsibilities, but however you try to shake off any liability for an imminent death, the responsibility will be yours alone, it will have your signature. We are sure that from our struggle, here and now, revenge will pour out, while your power will lie among the ruins of the history you have chosen, and for the first time life will triumph over death.

END_OF_DOCUMENT_TOKEN_TO_BE_REPLACED

Report on the gathering at Tirso de Molina [in Madrid], in solidarity with the anarchists arrested in Barcelona and with all the prisoners struck by the repression

Last Sunday,  28 March, about 100 people gathered in the Tirso de Molina square, in a small gesture of solidarity with the people arrested over recent weeks in the Spanish State because of the riots and demonstrations linked to the imprisonment of Pablo Hasél (and not only). Seven anarchist comrades are in prison, accused of trying to set fire to a police van in Barcelona during the demonstrations.

END_OF_DOCUMENT_TOKEN_TO_BE_REPLACED 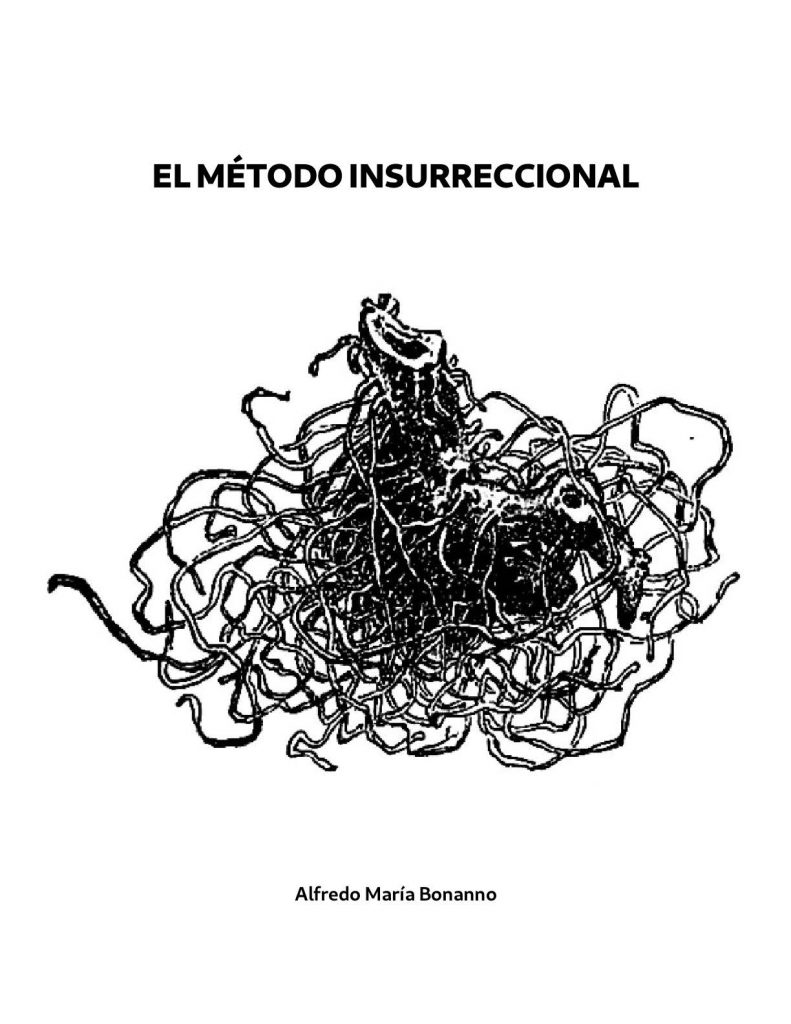 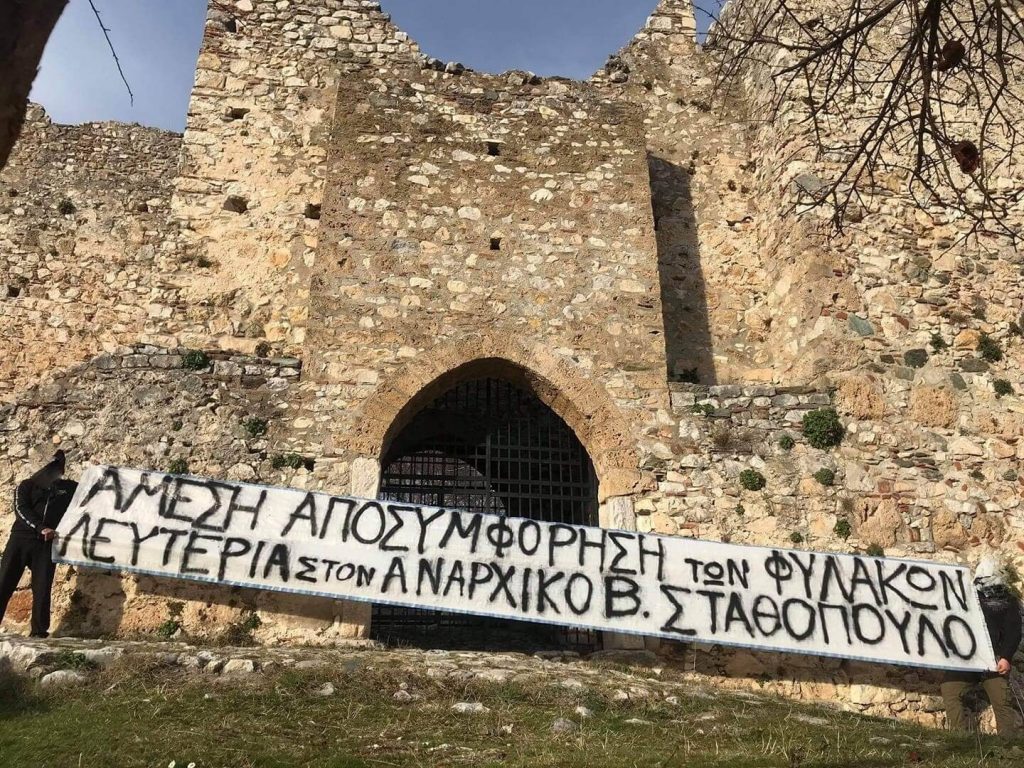 On Friday 8th of November 2019, the anarchist comrade Vaggelis Stathopoulos is arrested by the Greek Anti-terrorist Service with the excuse that he took part on a robbery in a gaming agency in Holargos, Athens on the 21st of October2019. During the next day of his arrest, within a crescendo of terror-hysteria reaction, he is suddenly being announced that he is also accused of participating in the organization “Revolutionary Self-defense”. Our comrade’s arrest is accompanied with an alloy of radio and mud towards his face, from the government’s right hand, the massive media, through various press publications and television reports which reproduce fabricated accusations and present him as the “domestic terrorist” and “the Kung Fu teacher who gives classes of military defense in order to create an army”. Τhroughout the whole period of his pre-trial detention, we witness the “theater of the absurd” which the Anti-terrorist Service and the Ministry of Citizen Protection has carelessly set up, since every single clue that they are trying to present is shaked down – DNA tests, accusations for specific attacks of the “Revolutionary defense” organization during which the comrade was in prison for a prior case,  supposed evidence for his participation in the robbery while at the specific time he was teaching in his martial arts’ school in the center of Athens, and so on…

From the first moment of his arrest, our comrade is denying  the accusations, both of the robbery and his participation in the “Revolutionary defense” organization, and as he has personally stated: “All this spectacle in my face is part of a repressive policy of the current government against the anarchists and the anarchist movement. The authorities spread lies for the way we act as anarchists; basically I have been charged with half of the criminal code simply because I showed solidarity in an injured person.Under the spectrum of solidarity I admit that I have helped a person who was injured. I am an anarchist, I am an active member of the anarchist movement… I deny all the accusations for the robbery and the “revolutionary defense”.

END_OF_DOCUMENT_TOKEN_TO_BE_REPLACED

People in Bristol standing up to unprecedented new police powers have faced immense police violence  since Sunday March 21st. The last week has seen police charging crowds with horses, releasing attack dogs on protesters, pepper-spraying people indiscriminately and physically attacking journalists. Those arrested will face harsh charges as the state seeks to make an example of them.

We believe that no one taking part in protests for social justice should face the system alone. If you do too, please donate.

Hidden behind the police statements branding demonstrators “a mob of animals” and the later-retracted claims of officers facing broken bones and punctured lungs, is the hard work of activists pushing for police accountability. Bristol Defendant Solidarity  (BDS) have been working for over a decade to support people facing police and state violence as a consequence for their activism. Now, we need your help.

We are aiming to raise an initial £15,000 with a stretch target of £30,000 to support people following Bristol’s #KillTheBill protests.

Avon & Somerset Police already have a long history of committing violence in our communities. The proposed Police, Crime, Sentencing and Courts Bill currently making its way through Parliament would give police sweeping new powers  to criminalise protests, intensify the attack on Gypsy, Roma and Traveller communities way of life, and increase the harsh effects of the criminal justice system with longer sentencing. And while people take to the streets to oppose it, the police have cracked down hard on the demonstrations.

Depending on need, and in this priority order, we will use this fund to support those targeted by police in connection with the Kill the Bill protests by:

• Supplying money for legal fees not covered by legal aid.
• Paying any travel costs to court.
• Covering loss of earnings sustained as a result of attending court.
• Supporting legal cases made against the police.
• Helping pay rent to ensure they can return to their homes after any custodial sentences.

In the unlikely event of there being any money left over from this, it will be held by BDS to support people in a similar way in the future. Solidarity is our best defence.