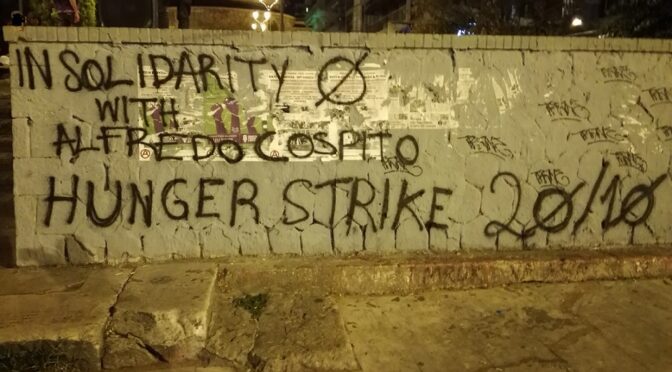 there is a whole world to be demolished!”

Alfredo Cospito has been in prison in Italy since 14 September 2012.He has taken responsibility together with Nikola Gai and has been sentenced for the shooting in the knees of the director of Ansaldo Nucleare and subsidiary of Finmeccanica, Roberto Adinolfi , an action carried out by the “Olga Cell – FAI/IRF in May 2012.In 2016 being already in prison he was accused of bomb attacks regarding the Scripta Manent operation. In 2020 he was finally accused of 2 bombs sent to the carabinieri training schools in Fossano, by the FAI/Anonymous Chaotic Rebellion.In November 2021 he was accused of incitement in the framework of the “Sibilla” operation, a case for which he was acquitted in December 2021.On 5 May 2022, after months of strict censorship of his correspondence, Alfredo was finally transferred from the Maximum Security Prison to the extreme isolation regime (41BIS), where he began a hunger strike on 20 October.

What is 41BIS isolation.

Talking about 41bis isolation is in fact talking about a slow and torturous murder. The circumstances are hardly comprehensible to the human mind since this law is the ultimate legal perversion. The prisoner is isolated 23 hours a day locked in a cell with the right to go outside for 1 hour. He is entitled to 10 minutes of supervised telephone communication per month with relatives only and 1 hour of supervised closed visitation per month,…In essence, 41bis means complete sensory isolation.

Comrade Alfredo Cospito is one of those comrades who did not stick to the brilliance and romanticism of anarchist ideology but instead practiced it. From his early years with his participation in combative squats, then with his refusal to serve in the Italian army, to the project of informal organization and anarchist nihilism.

We stand with anyone who honors the values of anarchy and who have made their ideas into action.

Here is the announcement in .pdf (greek)