In solidarity with Boris, who has been hospitalized for more than a year following the fire in the cell in which he was imprisoned for having set fire to two cell phone antennas, a collection of texts has been circulating since May 2022 on paper throughout France. Titled “From technological chains to prison bars, a whole world to be torn 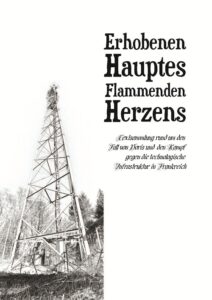 down”, this extensive booklet has inspired comrades from across the Rhine, who have added new texts to their translation, in order to continue to carry the solidarity with Boris across borders, and whose introduction can be found below.

Preface to Heads High, Hearts Burning: Collection of texts about the Boris case and the fight against technological infrastructures in France.

More than two years ago, on the night of April 9-10, 2020, an anarchist from the French city of Besançon named Boris went for a little night stroll and left behind two burning antennas, which caused the collapse not only of the regional telecommunication network of the various French cell phone operators, but also of the cops’ radio network. Two pillars of techno-industrial civilization, at least for a while.

Unfortunately, the cops found a bottle cap at the foot of one of the antennas, and on it, a trace of DNA that they attributed to Boris. In September 2020, he was arrested and remanded in custody. During the interrogation by the cops, he admitted to having set fire to the two antennas alone. On May 19, 2021, the court finally sentenced him, in the absence of his lawyer, to four years in prison, two of them suspended. Boris then appealed, but before this trial could take place, a fire broke out in his cell in early August, giving him severe burns. For months, he remained in a coma. Since then, he has regained consciousness, but he continues to fight hard. Paralyzed in all four limbs, but full of the will to live, he is confronted with the arrogance and omnipotence of the medical apparatus, which cannot believe that a “patient” has his own brain. Recently, the comrades in Besançon have spoken out again to launch a new call for solidarity with Boris.

This booklet contains these calls, as well as a selection of texts and leaflets that have appeared around Boris’ case. Not only to support a comrade who has suffered the full force of repression, but also to support his struggle, which inspires us and which is also ours, and which is inscribed in a whole array of attacks and struggles in France. To continue and bring the debate to the German-speaking world on the sabotage of infrastructure, the burning of antennas, the destruction of fiber optic cables, the attacks on electrical and energy infrastructure, as it is carried out in France.

That’s why, in addition to the texts about Boris’ arrest, we have added texts about the fight against technological infrastructure which Boris pushed forward. Among them, of course, is what Boris wrote himself about his motivation to burn down the antennas, “Why I burned down the two antennas on Mount Poupet”, as well as a text that originally appeared in Zündlumpen, “When, if not now?”, which was translated into English in the brochure “Burning the centers of the technological virus”, which the cops were particularly interested in at the time during the raids on the house of Boris and two of his other comrades from Besançon. You will also find in this collection the second text of the same brochure, “Sabotage against digital normality”, but also several other texts, mainly translated from French, which deal with the current wave of attacks in this territory.

In reaction to the repression against Boris, several attacks have taken place in France, claimed by people who carry out their own struggle in solidarity with Boris, while the number of anonymous attacks against antennas and technological infrastructures also continues to grow. A selection of both aspects can be found in this brochure.

Let the net of technological domination be set ablaze at every corner!

via: sansom Translated by Act for freedom now!