On the night of October 19, three years after the beginning of the revolt, we attacked the company SerCor located in the Las Condes district, specifically in building 150 of El Golf Avenue, with dynamite.

SerCor S.A. is a company of the corporate center of the Angelini Group that offers consulting and support to company boards for the administrative development of their capitalist businesses. SerCor is under the control of AntarChile, which is a major investment company, also belonging to the Angelini Group, and which manages assets of more than $20 billion.

AntarChile owns more than 70% of the shares of Forestal Arauco, a company with 1.6 million hectares of monoculture plantations responsible for the degradation and devastation of soils and which severely impacts the minimum conditions that a community needs to live, such as access to water and arable land. In addition, the MAPA project promoted by Arauco plans to modernize the pulp industry in southern Chile, reinforcing transnational extractivism in Argentina, Brazil, Peru, Ecuador, Colombia, Uruguay, Canada, the United States, and Panama, among other countries.

Antar also owns the fishing companies Corpesca, Igemar and Orizon, controlling more than 80% of their assets. It should be remembered that the fishing company Corpesca bribed former senator Jaime Orpis (UDI) and former congresswoman Marta Isasi (former UDI) by paying them more than 200 million to defend industrial fishing interests. Longueira was another of those who profited from this scheme, known as the “Fishing Law” or “Longueira Law”, which benefited the large fishing industry to the detriment of autonomous fishermen. Through different suppliers, this politician received a sum of 730 million pesos between September 2009 and March 2015 from the company Corpesca. This bribe was intended to influence the bill to be favorable to large industrial fishing companies.

As if that were not enough, Antar owns 90% of the fuel and gas distribution companies such as Copec, Abastible, Metrogas and Agesa, and other businesses of the Camino Nevado and Alxar mining companies. The vast majority of the aforementioned companies have their own floor in the building we have attacked. They represent key agencies for the consolidation of the neoliberal and extractivist system, from before the dictatorship until today.

Today we see how Boric’s government is complicit in the ratification of the Comprehensive and Progressive Agreement for Trans-Pacific Partnership (TPP-11), which undoubtedly gives greater legal powers to AntarChile’s companies. This government is part of alliances established by FA, PS, PPD, PC, who, together with the right wing at the time, made a firewall against the October revolt by opening a constitutional pact, and that now is returning to the same course with a new constitutional process between the dominant pacting groups. We reject this process that started and culminated as a failure, centralizing the struggles on the level of bureaucratic discussion at which waiting and economic readjustment is the name of the game.

To the comrades in action, to those who continued to be coherent and persistent in the new insurrectional path opened through the revolt: our greetings and unconditional support.

To those who “understand” the vote of converted “anarchists”, who chose to camouflage the social war in kindly practices and speeches: nothing! No Pluri-Police State will destroy our perspectives towards a new world, and with these perspectives the revolt continues, recharged together with those who did not allow themselves to be blinded by the constitutional oasis erected on the blood of our dead and finally finished off with the betrayal of the plebiscite’s outcome.

We clarify that we are not “lone wolves” as the hegemonic press tends to label the explosive attacks of recent times. Such designation is loaded with fundamentalism and religious fanaticism that stamps a seal of vanguard or heroism that we do not share at all. Our action, whether individual or collective, has an iconoclastic meaning. This time we are not acting alone. We are many and we will be more and more.

Only you are needed, comrade, to multiply autonomous action for the destruction of capitalist modernization! 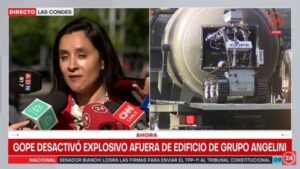 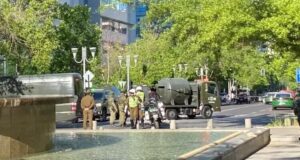