Anyone who seeks to understand what conditions exist that give rise 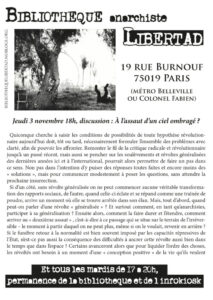 to the potential for any revolutionary hypothesis today must, sooner or later, formulate the entire set of problems with clarity, in order to be able to face them. Tracing the thread of radical and revolutionary critique back to the recent past, but also looking at the generalized uprisings and revolts of the last few years here and internationally, could enable us to take a step in this direction. Not with the intention of finding ready-made answers and especially not “solutions”, but to modestly start asking questions, without waiting for the next insurrection.

If on the one hand, without a generalized revolt, no real transformation of social relations can begin, on the other hand, when such a revolt bursts open and spreads like wildfire, there comes a moment when it is stopped in its tracks. But, first of all, when can we speak of a “generalized” revolt? And above all, how can we, as anarchists, participate in its generalization? Then, how to make it last and extend it, how to arrive at the “second storming”, that is to say at the moment situated on the terrain of the irreversible – the moment from which it is impossible, even if desired, to turn back? If the mournful return to normality is very often imposed by the repressive capacities of the State, is it not also the consequence of the problems we face in anchoring this revolt in time as well as in space?

Some will then argue that in order to annihilate the order of things, the rebels need a “positive vision” of the life they want to live at some point, or that what makes a revolt contagious is its depth, which is to say the fact that it becomes a “living example”. For others, to be concerned with this “positive vision” would be to project oneself into a distant “after”, and that what matters above all is to go further and further in the destruction of the existing order. How can we envision the uncompromising and transitionless destruction of the capitalist economy and industrial society, when these are the branches on which we are sitting, without giving in to the blackmail of the issues that this implies? Can we still automatically consider subversion as a part of acts of destruction, and trust the idea that by this destruction alone, the current social conflictuality tends towards a nothingness that would be antithetical to the nothingness produced by capitalism? Can we still think, as a comrade did yesterday, that a process of complete upheaval of the Old World would involve in the same movement a “destruction without reserve and a fertilization of the fantasy that creates new forms of life and fills them with substance”? If this destructive task and the passion that animates it have not been reduced to mere virtual impulses, and if fantasy has not totally disappeared following the rhythm of the disappearance of species, how can this be more concretely embodied in the present state of the world?

These are the kind of questions, among many others, that are discussed in pamphlets like Le mot et la chose. A propos de projet révolutionnaire and Ah, comme il est urgent de démolir ! as well as Plus de deux mois de révolte contre l’État du Chili : bilans rapides, projections instinctives et négations permanentes (available at the library, or downloadable by clicking on the titles above). Questions and paths that could grow in substance: available as always for everyone to appropriate them, to debate them and to extend them, for example, on the occasion, we hope, of this discussion. 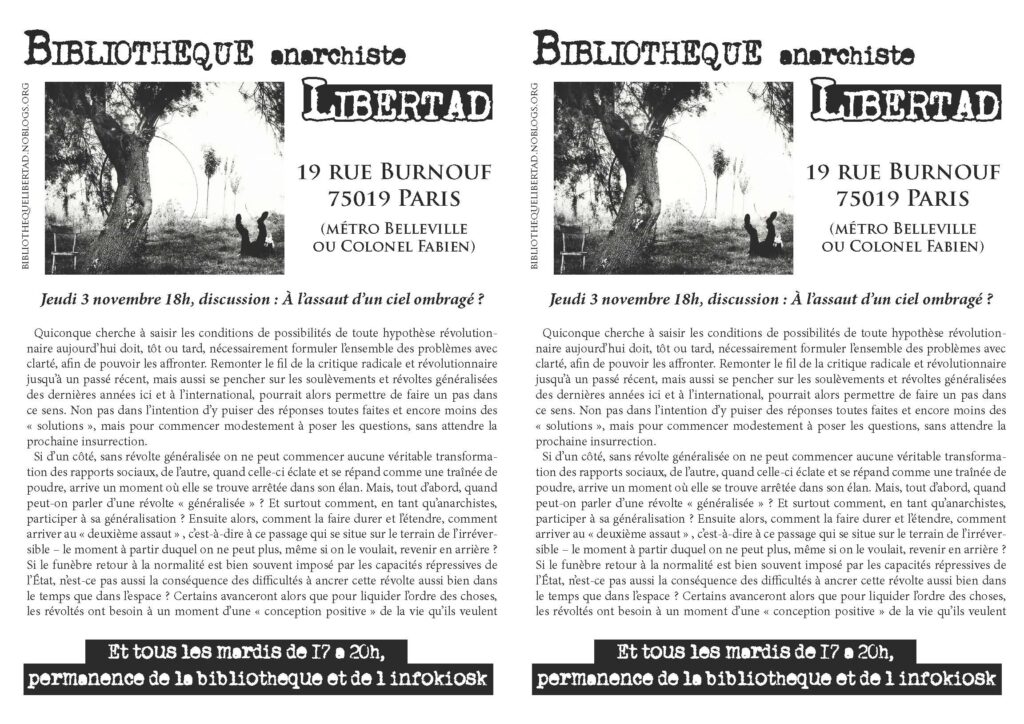 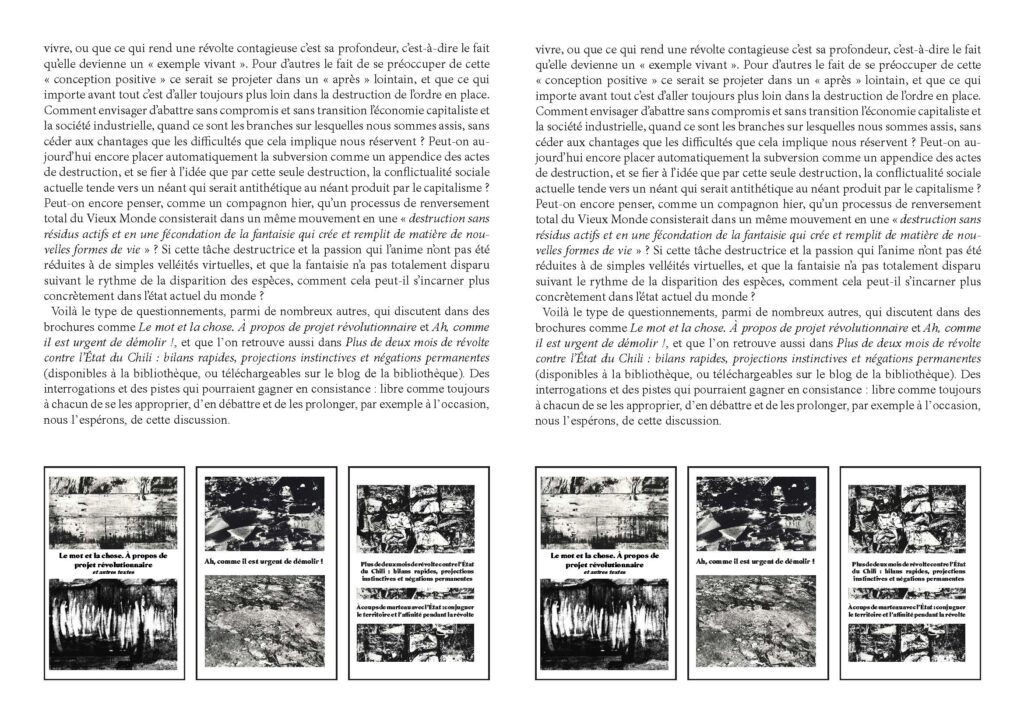