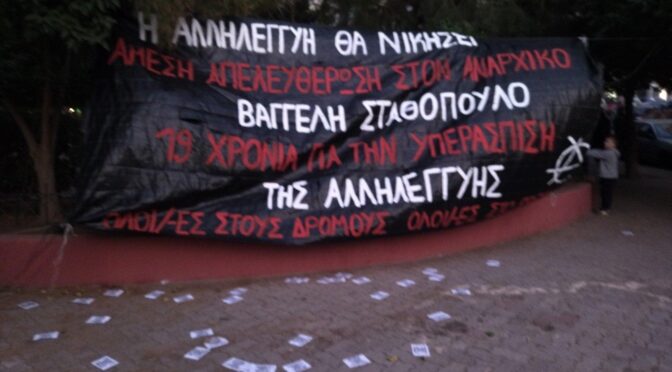 Regarding the upcoming court dates of Anarchists V. Stathopoulos and Dimitris Hatzivassiliadis

The presence and support of our comrades is necessary.

In particular, the following hearings have been scheduled:

AGAINST STATE PLOTS – STANDING WITH OUR COMRADES

Excerpts from a letter of comrade Vangelis Stathopoulos:

…….So I have been summoned to a trial, in which I am being tried for the concept of solidarity. Solidarity is a relationship and a selfless relationship between people. A social relationship, a concept that particularly inspires the wider resistance movement and a basic component to build a world against the exploitation of man by man. A common component also within resistance movements worldwide, a basic foundation of their history….

….Solidarity is being tried in my case with the most serious charges because I helped an injured comrade. My prosecution and trial is based solely on political criteria, on the attitude of dignity and solidarity that I have followed  consistently in my life. I have nothing to save but my own life, I have nothing to defend but the constant struggle against the murderous fury of the State and capital! If my practical solidarity is the crime for which I must be condemned and punished, I declare myself unrepentant!

Assembly of Solidarity to the anarchist Vanggelis Stathopoulos