Act for freedom now! received by email and translated to English
———————————————————————-
FIRST OF NOVEMBER TERNI – SPOLETO: GATHERINGS IN SOLIDARITY WITH ALFREDO, JUAN AND THE PRISONERS IN REVOLT 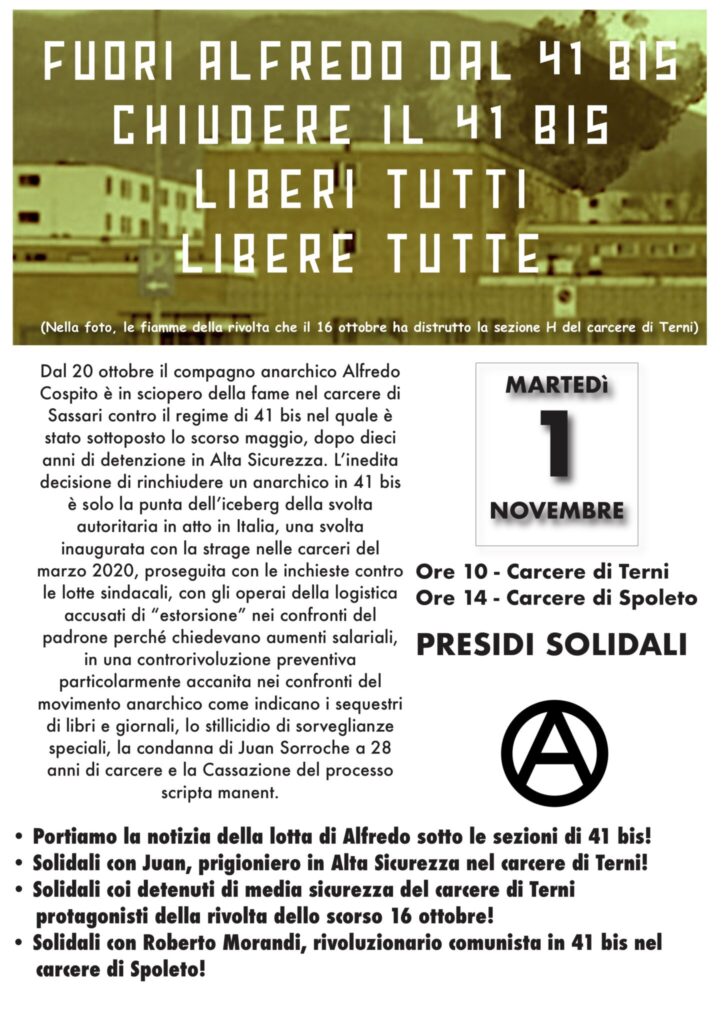 ALFREDO OUT OF 41 BIS
END 41 BIS
EVERYBODY FREE

The anarchist comrade Alfredo Cospito has been on hunger strike since 20th October in the prison of Sassari against the regime of 41 bis that he has been subjected to since last May, after ten years in Maximum Security. The unprecedented decision to keep an anarchist in 41 bis is just the tip of the iceberg of the authoritarian backlash in act in Italy, a backlash inaugurated with the prison massacre in March 2020, followed by investigations against trade union struggles, with logistics workers accused of ‘extortion’ against the boss because they demanded wage increases, in a particularly fierce preventive counterrevolution against the anarchist movement as indicated by the seizures of books and newspapers, the endless special surveillance, the sentencing of Juan Sorroche to 28 years’ prison and the Court of Cassation of the scripta manent trial.
TUESDAY 1ST NOVEMBER
10am – Prison of Terni
2pm – Prison of Spoleto
SOLIDARITY GATHERINGS
• We will bring news of Alfredo’s struggle against the 41 bis sections!
• In solidarity with Juan, maximum-security prisoner in the prison of Terni!
• In solidarity with the medium-security prisoners in the prison of Terni protagonists in the revolt of last October 16!
• In solidarity with Roberto Morandi, revolutionary communist in 41 bis in the prison of Spoleto!