Montreuil/Aubervilliers : Raids and arrests of 3 comrades 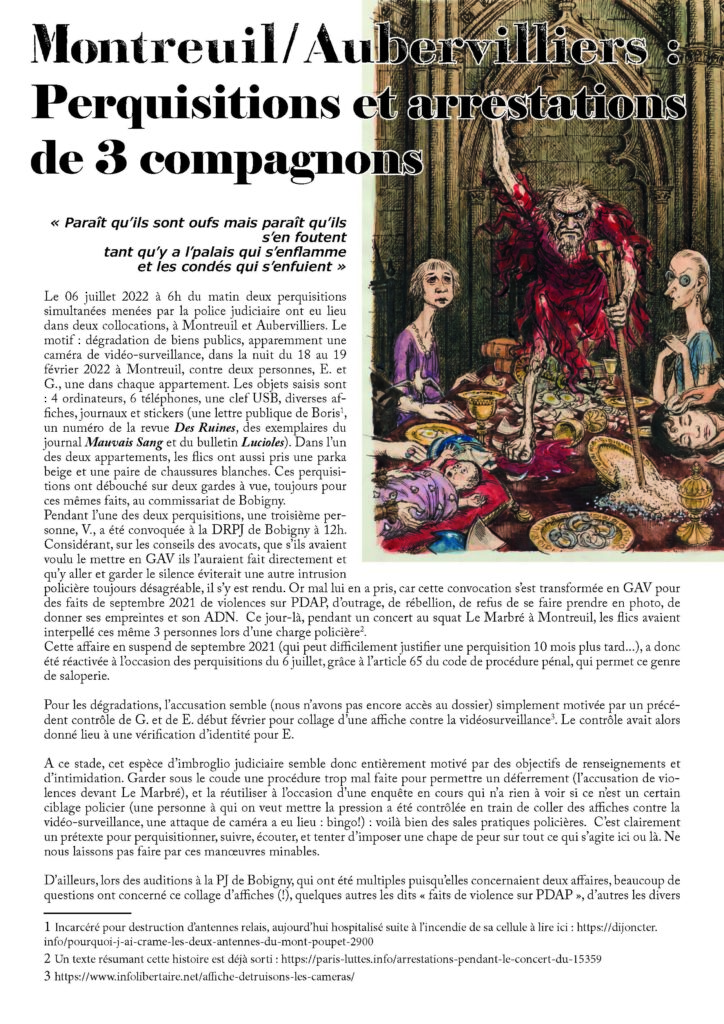 On July 06, 2022 at 6:00 a.m. two simultaneous raids by the judicial police took place in two apartments, in Montreuil and Aubervilliers. The motive: destruction of public property, apparently a video surveillance camera, during the night of 18 to 19 February 2022 in Montreuil, against two people, E. and G., one in each apartment. The objects seized were: 4 computers, 6 telephones, a USB key, various posters, newspapers and stickers (a public letter from Boris [1], an issue of the magazine Des Ruines, copies of the newspaper Mauvais Sang and the newsletter Lucioles). In one of the two apartments, the cops also took a beige parka and a pair of white shoes. These raids led to two arrests, again for these same events, at the Bobigny police station.

During one of the two raids, a third person, V., was summoned to the DRPJ of Bobigny at 12:00. Considering, on the advice of the lawyers, that if they had wanted to put him in police custody they would have 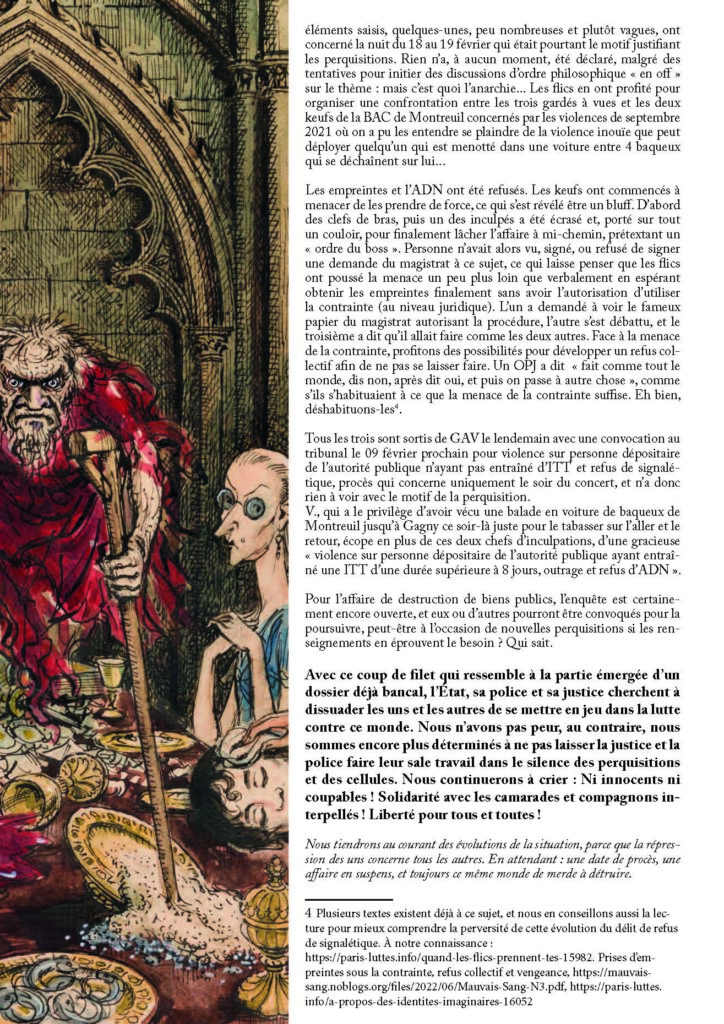 done so directly and that going there and keeping silent would avoid another unpleasant police intrusion, he went there. But it was a bad idea, because this summons was transformed into police custody for the events of September 2021 of violence on PDAP, contempt, rebellion, refusal to have his photo taken, to give his fingerprints and his DNA. That day, during a concert at the squat Le Marbré in Montreuil, the cops had arrested these same 3 people during a police charge [2]. This pending case from September 2021 (which can hardly justify a raid 10 months later…), was thus reactivated on the occasion of the raids of July 6, thanks to article 65 of the code of criminal procedure, which allows this kind of crap.

As for the damage, the accusation seems (we do not yet have access to the file) to have been motivated simply by a previous control of G. and E. at the beginning of February for putting up a poster against video surveillance [3]. The control had then led to an identity check for E.

At this stage, this kind of judicial mess seems to be entirely motivated by intelligence and intimidation objectives. Keeping under one’s belt a procedure too badly put together to allow for a deferral (the accusation of violence in front of Le Marbré), and reusing it on the occasion of an ongoing investigation that has nothing to do with anything except a certain police targeting (a person to whom one wants to put pressure was controlled sticking up posters against video surveillance, an attack on a camera took place: bingo!): this is indeed a dirty police practice It is clearly a pretext to search, follow, listen, and try to impose a blanket of fear on everything that stirs here or there. Let’s not be taken in by these shabby maneuvers.

Moreover, during the hearings at the PJ of Bobigny, which were multiple since they concerned two cases, many questions concerned this poster pasting (!), some others the said “events of violence on PDAP”, others the various elements seized, some, few and rather vague, concerned the night of February 18 to 19 which was however the reason justifying the searches. Nothing was declared at any time, despite attempts to initiate philosophical discussions “off the record” on the theme: what is anarchy? The cops took the opportunity to organize a confrontation between the three detainees and the two cops of the Montreuil police force concerned by the September 2021 violence, where we could hear them complaining about the unheard-of violence that can be unleashed by someone who is handcuffed in a car surrounded by 4 cops who are going crazy on him…

Fingerprints and DNA were refused. The cops started threatening to take them by force, which turned out to be a bluff. First, the arm wrenches, then one of the defendants was restrained and carried down an entire hallway, only to drop the case halfway through, claiming an “order from the boss.” No one had seen, signed, or refused to sign a request from the magistrate on this matter, which suggests that the cops took the threat a little further than verbal, hoping to get the prints finally without the authority to use coercion (legally speaking). One asked to see the famous paper from the magistrate authorizing the procedure, the other struggled, and the third said he would do what the other two did. Faced with the threat of coercion, let’s take advantage of the opportunities to develop a collective refusal so that we don’t let ourselves be coerced. One OPJ said, “Do what everyone else is doing, say no, then say yes, and then we’ll move on,” as if they were getting used to the threat of coercion being enough. Well, let’s make them unaccustomed to it [4].

All three were released from police custody the next day with a summons to appear in court on February 9 for violence against a person in authority who did not cause any temporary disability and refusal to sign, a trial that only concerns the evening of the concert, and therefore has nothing to do with the reason for the raid.

V., who has the privilege to have lived a car ride from Montreuil to Gagny that evening just to beat him up on the way there and back, gets in addition to these two charges, a graceful “violence on a person of the public authority having led to an ITT of more than 8 days, contempt and refusal of DNA”.

For the case of destruction of public property, the investigation is certainly still open, and they or others may be summoned to continue it, perhaps during new raids if intelligence feels the need? Who knows.

With this raid, which looks like the tip of an already shaky case, the state, its police and its justice system are trying to dissuade people from getting involved in the fight against this world. We are not afraid, on the contrary, we are even more determined not to let justice and the police do their dirty work in the silence of the raids and the cells. We will continue to shout: Neither innocent nor guilty! Solidarity with the arrested comrades and companions! Freedom for all!

We will keep up to date with the developments of the situation, because the repression of some concerns everyone. In the meantime: a trial date, a pending case, and still the same shitty world to destroy.

[1] Incarcerated for the destruction of relay antennas, now hospitalized following the fire of his cell to be read here: https://dijoncter. info/pourquoi-j-ai-crame-les-deux-antennes-du-mont-poupet-2900

[2] A text summarizing this story has already been published: https://paris-luttes.info/arrestations-pendant-le-concert-du-15359

[4] Several texts already exist on this subject, and we also recommend reading them to better understand the perversity of this evolution of the offense of refusing to give biometrics. To our knowledge :
https://paris-luttes.info/quand-les-flics-prennent-tes-15982?lang=fr
Forced fingerprinting, collective refusal and revenge,
https://mauvaissang.noblogs.org/files/2022/06/Mauvais-Sang-N3.pdf
https://paris-luttes.info/a-propos-des-identites-imaginaires-16052?lang=fr