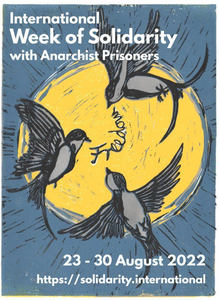 These words travelled by your side from a cell very far from yours. They carry with them, the identically guilty thoughts that crush borders and walls. They carry the same persistence and impatience for the return to the paths of fire. Those thoughts don’t die daily on the iron bars and uninformed figures that separate us. They remain alive accompanying the same necessity for one more consensual plan that will surrender to the fire and gunpower the order and safety of this old world.

Day by day more and more parts of the sky are given away to the iron bars. And there is one question torturing my head more and more: is it the concrete that grows higher or is it maybe the head lowering? However, life itself answers this question. Prisons will not crush us comrades. Because we remain with the same pride wholeheartedly fighting to overcome power.

New formulations of direct action are coming together in territories where until recently we were stating irrevocably present. New plans of attack are being realised, travelling to all metropolitan centres and spreading the necessity to attack the carriers of violence and the exploration of the oppression (ones).

Travelling into the present, the words of the Italian autonomous guerillas offer it is of great importance to remind our tyrants that uncertainty is the most unbearable state. No matter how many years of captivity go by we will wholeheartedly remain faithful to the nucleus of turning theory into action proudly defending the anarchist guerilla warfare. We are the parts currently connecting the past, the present and the future of insubordination, rupture and subversion. Inprisonment will not bend us even for a moment. Because willingness and the necessity against captivity are like the pointers of clock: while time is pointlessly trying to divide them, they cross their revolutionary paths by starting and ending at the exact same point.

I am sending you my bright guilt holding my breath for the next acts against the people of power. All of our strength to the international imprisoned community of anarchist guerilla warfare and a raised fist to every struggling initiative that insists on against the order of this world.