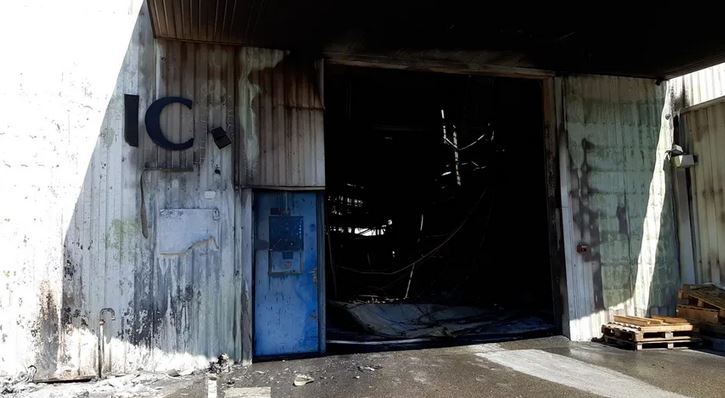 Night of May 18, 2022. The production workshops of ” Précis Mécanic “, supplier of the war industry and other technological nuisances, go up in smoke…

A plume of black smoke

It was exactly two months ago. On the night of May 17 to 18, 2022, shortly before midnight, a large plume of black smoke rose above Sassenage (Isère). A large blaze was in the process of devouring hundreds of square meters in an industrial zone located northwest of Grenoble. Major resources were deployed on site, but the firemen only managed to save the company’s administrative offices and a storage depot. The production workshop was completely destroyed. The 40 skilled workers and engineers employed by the company were put on unemployment until production could be restarted on another site.

If the press did not conceal this nocturnal fire with a modest veil of silence, it did not look further than the plume of smoke that rose that night over the Grenoble basin. This is perhaps because the name of the company ravaged by the flames is not particularly evocative. And indeed, one cannot prove them wrong: “Précis Mécanic” does not seem to be a name designed to attract attention. Yet, among the clientele of this precision mechanics and machining SME, which celebrated its fifty years of existence in 2016, appear well-known names from the technology industry: Schneider Electric, Siemens, Orano, Bosch, JST Transformateur. And that’s still without mentioning the services Précis Mécanic has already provided to the military industry, a merit it boasts on its own website: “production of card baskets, boxes for electronic cards embedded in nuclear submarines and fighter planes.”

In this period of technological rush to the abyss, did the production workshops of Précis Mécanic undergo the hazards which torment the life of any industrial installation, which is never safe from an unfortunate electrical short-circuit? Have they been struck by

lightning? Were they reduced to ashes by the careless gesture of a smoker throwing his cigarette butt into a pile of sawdust or a garbage can? Or would the fire have a much less innocent and less banal origin? In any case, the gendarmerie did not want to communicate the results of its investigation to determine the origin of this nocturnal fire.

But would it be so unimaginable that in this period of announced warmongering in the middle of the climatic disaster, someone had the good idea to go and flush out a small manufacturer of machines of death during the night? A war miller for machines that swarm across the planet, making it ever more nightmarish? A manufacturer of circuit breakers and other specialized parts that equip high voltage lines, electrical substations and transformers that irrigate the veins of the industrial world?

Whatever the case, the plume of smoke over Sassenage was a reminder that death is also made behind the doors of anonymous buildings scattered throughout the French territory. If this plume of smoke seems to send a clear signal to all the small and large manufacturers of death machines that they are not safe from a failure… or from an incendiary sabotage, on his side the President of the Republic has also the merit to have been clear these last days. He declared that “France and the European Union have entered in a war economy”.

In the same vein as other words and gestures that are difficult to misunderstand: just before supervising the national parade on July 14, the president visited an industrial site located in the Grenoble technology basin. He went there to reassure the Franco-Italian multinational electronic components company STMicroelectronics that the State would continue to support it. Last April, the factories of STM and another giant in this field, Soitec, as well as hundreds of small companies active in the technology sector, were paralyzed for several days by two successive sabotages of an electrical substation and high-voltage lines, thus affecting this “strategic” branch of the economy. He also promised billions of euros in state aid to help finance a new unit to double the production of semiconductors and electronic components.

via: sansnom translated by Act for freedom now!