Rovereto, windows smashed in solidarity with Juan, Alfredo and Anna

We learn from the local media that the windows of various banks and shops in the town centre were smashed between 3 and 4 July. According to reports the banks Intesa San Paolo and Crédit Agricole and the Benetton and Inbitcoin stores were struck. The words “Juan Alfredo Anna free” were found nearby. 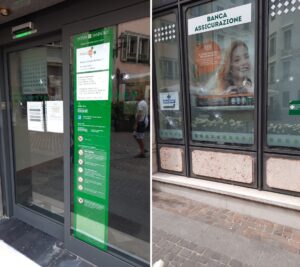 A rude awakening this morning for the inhabitants of the city of the oak: in the night the town centre of Rovereto was victim of a vandalistic raid, with various windows damaged and the words “Juan Alfredo Anna free” written on a bank.

The perpetrators of the vandalistic raid have not yet been identified, but on the window of the Crédit Agricole branch were found the words “Juan Alfredo Anna free”. The windows of the structure in via Stoppani were also damaged, while in piazza Cesare Battisti the vandals struck the windows of the branch of Intesa San Paolo.
A little further up the street, in via Rialto, it was the shop window of Inbitcoin that was struck and damaged in various points. In via Mazzini those responsible for the action then destroyed the windows of the Benetton shop. It isn’t clear what the vandals used to destroy the shop windows in the town, but one thing certain is that the damage to the affected companies is not insignificant.