Publication: Locked up. A reflection on prison [French] 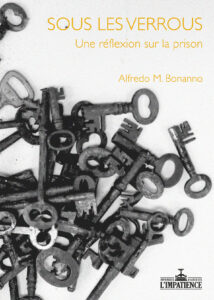 The text that we publish here is the transcribed recording of a conference on prison, given in March 1993 at the Laboratorio anarchico of via Paglietta in Bologna and previously published in the book Affinities and informal organization by the editions Anarchismo. This conference is reproduced here with some minor corrections by its author, and an introduction penned by him in the prison of Rebibbia.

There are several reasons why we decided to publish this booklet.

First of all the interest of the arguments presented, which we share, and in particular the main idea of the necessary destruction of prison. It is, in fact, one of the prerogatives of the anarchist movement to require a world without any kind of prison, and to interpret this desire in the offensive sense, of the destruction of prison in a revolutionary perspective. In order for all of us to be free, no one must be excluded.

On the other hand, prison is a reality that touches us particularly closely today, given the repression that is being faced by many anarchists throughout Italy.

But, beyond this serious circumstance, this publication would like to encourage anarchists in particular to reopen a debate on the question of the prison, a debate that has been attenuated lately, and that we think it would be good to take up again in order to acquire new theoretical-practical instruments without preconceptions, in order to actualize an offensive project about imprisonment.

In appearance, prison is the physical place where the lives of thousands of individuals are locked up, where the possibilities and the means to move around for a certain period of time are limited behind thick, highly guarded walls. But prison is not only that, it is not only the last barrier of the society where one can enter only as a prisoner or as a jailer. It is not only the dark side of our way of life, that closet inaccessible to our eyes as good citizens, where the rejects or the enemies of our well-being are stored with those unpleasant but necessary cleaning tools.

Translated by Act for freedom now! via: sansnom