Eleonas-Thebes and Domokos prisons, Victory in the Struggle of Comrade Michailidis

Solidarity to comrade Michailidis who is on hunger strike demanding his freedom. Despite the 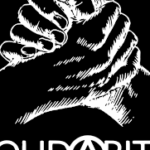 fact that he has served his sentence, the state repeatedly refuses to release him. No comrade should be left alone in the struggle for freedom.

members of the Revolutionary Struggle