Storm warnings, anarchist bulletin for the social war, issue 52 (April 2022) came out. It is the full English translation of Avis de Tempêtes. 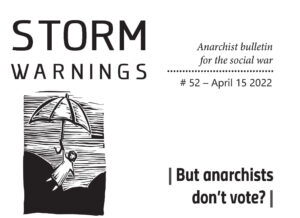 Earlier issues and translations in different languages are available for reading, printing and spreading on the website https://avisbabel.noblogs.org

“Denouncing the technological control used by the Chinese state or Russia’s current war drive, suggesting that the capillary control in effect on this side and its multiple “anti-terrorist and humanitarian operations” across the planet would be the lesser evil to hope for, does not make much sense. Of course, one cannot reasonably argue that fighting in a territory dominated by an omnipresent and over-equipped State would be equivalent to fighting in a territory controlled by a less developed State. But this does not change that in each of the two cases, one of the deadly traps to be avoided is to participate voluntarily, by our very struggles, to the ongoing readjustment or accommodation of domination (the caricature of which certainly resides in our latitudes in the struggles for more inclusive technologies guaranteed by the State). That’s why we need to focus our attention, trying to hit where it hurts, where the system could less easily bounce back by retreating slightly in order to better regain control later on. In short, it is not simply a question of making ourselves uncontrollable or ungovernable, but of being able to aim directly at its blind spots with an effort of analysis and projectuality.”