Têche (Isère): the fight against antennas continues
Investigation on a series of relay antenna arsons
The gendarmes of the Isère department are investigating a series of 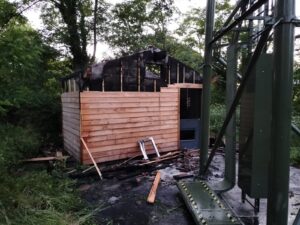 incendiary attacks on telecommunications infrastructures committed between Nord-Isère and the Saint-Marcellin region.
One of these arsons occurred in Têche, on the night of Wednesday 25 to Thursday 26 May, at around 3 a.m. Unknown individuals broke into the premises of a site belonging to the operator Free, and set it on fire. The company of Saint-Marcellin opened an investigation, as the damage deprived numerous subscribers of Internet.
In January and February, in the Terres froides, the same relay antenna was burned twice, sabotage was also recorded in the area of Lake Paladru. A few weeks ago, an antenna had been damaged in Saint-Chef. Finally, on Friday 27 May, a cell phone relay antenna was set on fire in Soleymieu.
via: sansnom translated by Act for freedom now!