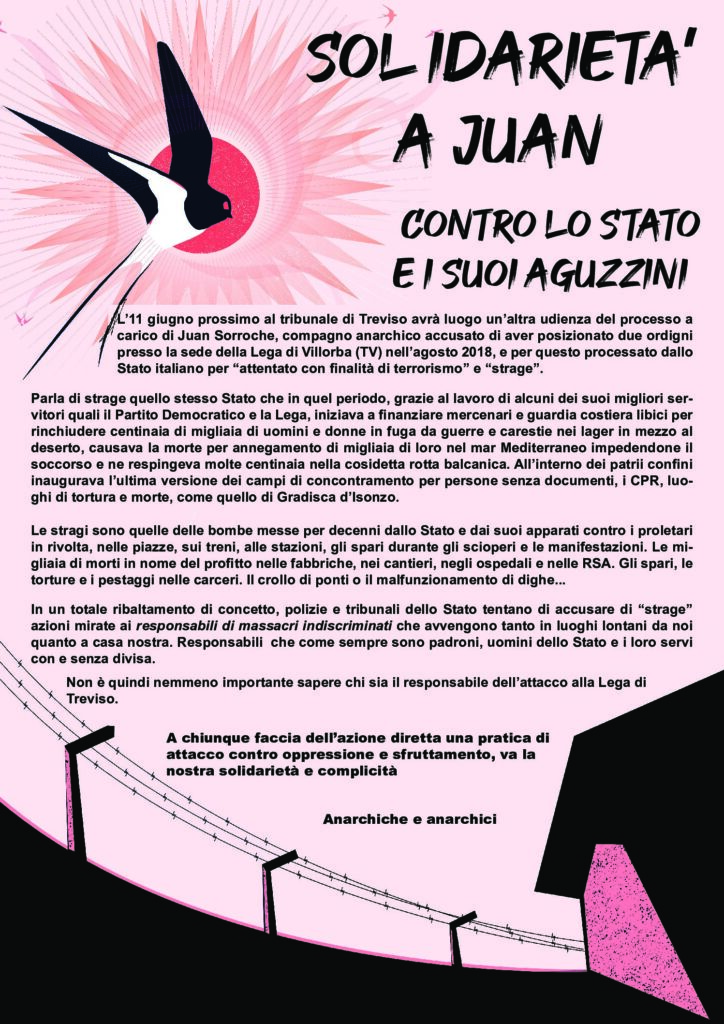 SOLIDARITY WITH JUAN, AGAINST THE STATE AND ITS TORTURERS

On 11th June another hearing of the trial against Juan Sorroche will take place at the court of Treviso; Juan is an anarchist comrade accused of placing two devices near the premises of the League in Villorba (Treviso) in August 2018, and for this he was put on trial by the Italian State for “attack with purposes of terrorism” and “massacre”.

The State that talks about massacre is the same that at the time, thanks to the work of some of its best servants such as the Democratic Party and the League, began to finance Libyan mercenaries and coast guards in order to lock up hundreds of thousands of men and women fleeing wars and famine in concentration camps in the middle of the desert, the same that was causing death by drowning for thousands of them in the Mediterranean sea, preventing them from being succoured and the same that was chasing back many hundreds in the so-called Balkan route. Inside its national borders it was inaugurating the latest version of concentration camps for undocumented people, the CPRs, places of torture and death, such as that in Gradisca d’Isonzo.

Massacres are those that have been caused by bombs placed in squares, trains and stations by the State and their apparatuses for decades against proletarians in revolt, the shootings during strikes and demonstrations. Thousands of deaths in the name of profit in factories, building sites, hospitals and RSA [residenze sanitarie assistenziali, healthcare accommodations]. Shootings, torture and beatings in prison. Collapse of bridges and malfunctioning dams…

By a total overturning of concept, the police and courts of the State are trying to accuse of “massacre” actions directed at those responsible for indiscriminate massacres which occur in both places far away from us and in our country. As usual those responsible are the bosses, men of the State and their servants with and without uniforms.

Therefore it is not even important to know who is responsible for the attack on the League of Treviso.

Our solidarity and complicity go to anyone who makes direct actions a practice of attack on oppression and exploitation.