On the night of 21st April we set fire to a wind turbine in Portovesme. 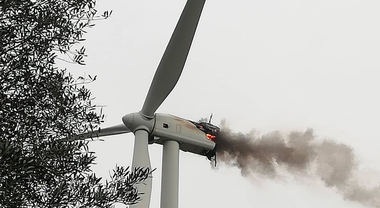 Every excuse is good to rape and torture our Sardinia with every kind of servitude. The coal plant was not enough… The owners of “clean” energy turbines are the same ones who pollute our air and seas with oil and carbon. Enel is here TO EARN MILLIONS BY ROBBING RESOURCES AND GIVING THE CRUMBS BACK TO US. [The argument] of jobs is just bullshit. What is left to us are very expensive bills to be paid, the countryside and the sea full of turbines and solar panels. There are many new projects and they are scary… the past teaches us what the Italian state and the Sardinian region want to do with sulcis….A LANDFILL.

For this reason we did it and will do it again. All Sardinians must raise their heads against the umpteenth act of violence that wants us to be DEPENDENT SLAVES. We must defend the land that raised us.

Let’s dismantle the panels, switch off the power stations, stop the blades… let’s kick out those who want to subjugate us