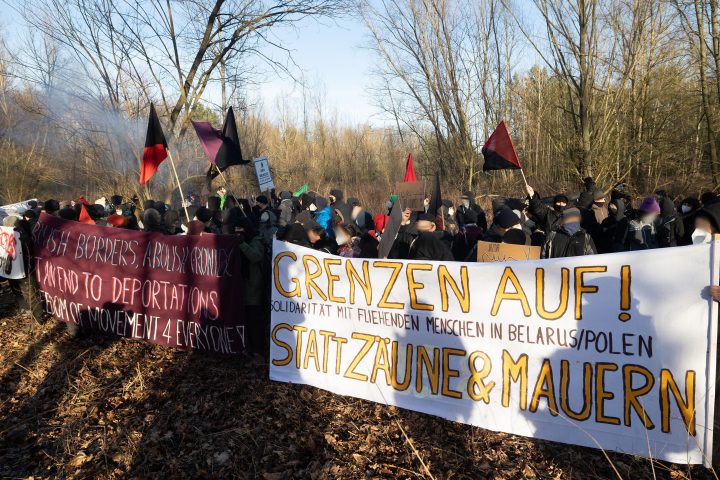 Yesterday, Saturday, February 12, 2022, 300 people demonstrated against the Polish internment camps. Also the coach of Solibus e.v. from Berlin came with about 50 activists* to Krosno Ordzańskie, 150km away. Together with German and Polish groups and many individuals, they protested for the freedom of movement of refugees and against the conditions in all arrival centers in the country. There were speeches by various groups and letters from those affected were also read out in several languages.

With drums, banners and chants, the demonstrators gathered in front of the camp in Krosno Ordzańskie, where currently about 100 people are detained in a former barracks. These are people who made headlines at the turn of the year on the Polish-Belarusian border because they became pawns of Lukashenko’s, Poland’s and the EU’s policies. In the meantime, we know that at least 21 people died at this border, some of them froze to death.

Those who actually managed to apply for asylum in Poland are estimated at around 2000. They now remain indefinitely in camps like the one in Krosno Odrzańskie, waiting for news on their asylum request. In addition to undignified conditions (hardly any medical care,ban on smartphones, etc.), isolation and the insecure situation cause extreme stress. Since most of these people are victims of violence, this form of „accommodation“ is illegal according to Polish law.

With the demonstration, the activists* set a clear sign for freedom of movement, international solidarity and against the border regime Europe. There were several arrests after the demonstrators spontaneously left the rally site in order to get closer to the interned people with music and chants, so that they could even hear the action in their cells.

A spokeswoman from the alliance said: „The people in these camps often do not know when they will be released and what the current situation is regarding their request for asylum. I am very happy about the strong and especially international participation in this demonstration. An entire coach from Berlin, with people protesting against the border regime virtually on their doorstep, are an important sign of international solidarity. We demand the dissolution of these reception camps, a suspension of deportations and also the stop of the construction of the wall and thus the destruction of the forest. Everyone knows that migration cannot be prevented even with walls. It only becomes more dangerous for people seeking protection and more rewarding for smugglers.“

This morning, Monday 14.02, 11 activists (from Poland and Germany) who had shown solidarity with the imprisoned migrant:s were still detained in the police stations of Krosno Ordzańskie and Zielona Gora. Some of them have been injured and put under psychological pressure, some are already facing possible prison sentences and some are threatened with pre-trial detention. NoBordersTeam Poland is asking for international support.
[https://www.facebook.com/nobordersteam/?ti=as]