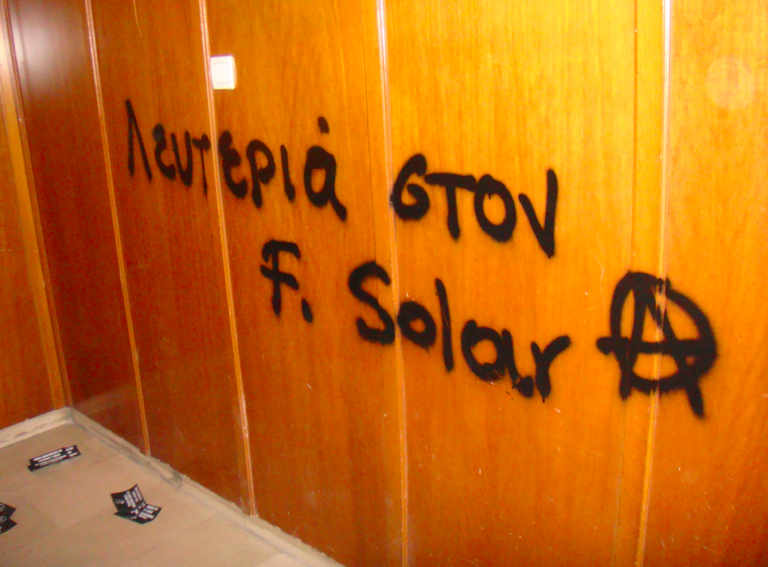 “Prison is another point of struggle at the post-conflict level – the anti-authoritarian conflict is not over for me, it has just changed form”

24/7/20 in Chilean territory, anarchists Monica Caballero and Francisco Solar are arrested, accused of parcel-bombing. Specifically, for a bomb that exploded in the Huechuraba police station, leaving a cop seriously injured, – and one that was defused by the GOPE (operational police group), a bomb in the office of Rodrigo Hinzpeter, former minister and current manager of the Quiñenco company (one of Chile’s largest business groups), and finally, for planting two bombs in the Tánica building. Since 24/7, therefore, the comrades have been held in custody and have remained in the cells of the republic ever since.

In the first months of 2021, comrade F. Solar, along with other anarchist and subversive prisoners, participated in a hunger strike that lasted for more than 50 days, demanding the release of Marcelo Villarroel, and against the modification of Legislative Decree 321, while 11 years before, he had put his body as a mound in another hunger strike, for more than 60 days.

The serious health condition of the comrade, but also the expected indifference of the prison administration, led him on 22/09 to request further medical examinations, after an emergency hospitalization, where he was diagnosed with advanced diabetes (on the verge of a diabetic coma).

After achieving minimal stabilisation, he was returned to ward 2 of the prison, where despite two daily doses of insulin given restrictively by doctors, he still fails to achieve normal glucose levels. Plus the comrade is experiencing significant vision loss without receiving any medical attention in this regard. The confinement regime, especially the conditions of detention, is worsening our comrade’s health condition day by day.

The case of comrade F. Solar can easily be compared to the case of anarchist G. Dimitrakis, who on 24/5/2021 was beaten by mafia prisoners because he tried to prevent the beating of a fellow prisoner. The comrade is taken to Larissa hospital with craniocerebral injuries and multiple haematomas and although he escaped immediate danger to his life, he needs specialized and extensive treatment to fully recover.

The state, however, once again, took the opportunity to show its teeth by transferring G. Dimitrakis to the isolation of Domokos prison on 3/6/2021, depriving him of the necessary care, while on 21/07 his application for the suspension of his sentence was rejected. As always, the authorities, in close cooperation with Nicolaou and the prison service, apply a vindictive regime of exception to political prisoners, which does not surprise us since the incarcerated, especially the revolutionaries, in every territory of the planet, constitute subjects for extermination.

The distance between us and many comrades may be great, but their life choices, even in the most remote parts of the planet, the paths they have taken and continue to take, their unrepentant attitude, their refusals and their rage, become in our hands ammunition for one more step.

No matter how much concrete is put between us, as the repression intensifies and the persecutions increase, our thought and action will always be alongside the imprisoned comrades around the world.

We have long since chosen a side. You will find us before you.

FROM GREECE TO CHILE STORM AND FIRE IN EVERY PRISON

STRENGTH TO THE REVOLUTIONARIES INSIDE AND OUTSIDE THE WALLS

WAR WITH ALL MEANS FOR ANARCHY

Assembly of Anarchists Against the Social Machine