On 20th September, at the court of the assizes in Genoa, prosecutor Federico Manotti and the civil party representing Rinaudi were heard at the Prometeo trial. 17 years were demanded for Robert and Natascia and 18 years and 4 months for Beppe, the latter two comrades having been locked up for over two years in Rebibbia and Bologna respectively. The main charge remained that of article 280 (attack with purposes of terrorism) with continuation of the crime and the aggravating circumstance 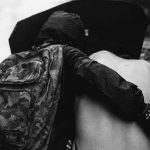 constituted by the offended party in question (two prosecutors and the chief of DAP [Department of Prison Administration]). The lethal element was excluded from the demand but article 270 sexies remained for [the charge] of having acted with purposes of terrorism.

The civil party didn’t submit any demand for compensation, maintaining that “17 years are sufficient and there is no desire to be overzealous” (sic!).

On 27th and 28th September two hearings entirely dedicated to the defence will take place, moreover the date for sentencing will be set, which should roughly happen in mid-October.

Solidarity – active and revolutionary – is a weapon to prevent those kind of demands from passing in silence: let’s use it!

Talking of solidarity, here are the details to use for benefits and money contributions in support of prison expenses, monthly journeys for visits and legal expenses:

We also give the addresses to write to Nat and Beppe:

Prometeo Operation: flyer and poster for a gathering in solidarity and complicity on Monday, October 4, in front of the court in Genoa (Italy) 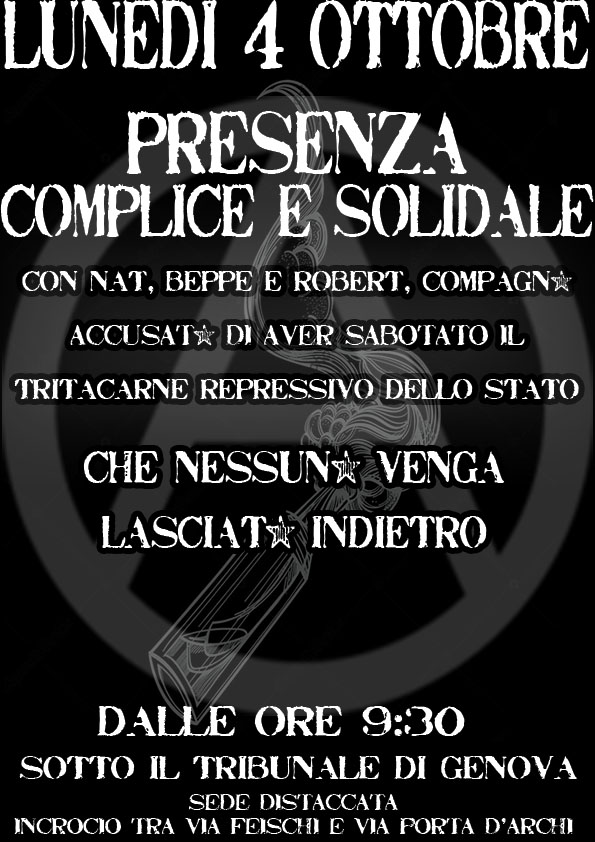 On Monday, October 4, 2021, at the Court of Genoa, the first-degree sentence will be passed in the “Prometeo” trial in which three comrades, Natascia, Beppe and Robert, are accused of sending parcel bombs against two former prosecutors from Turin, Sparagna and Rinaudo (prosecutors who have been involved in the repression of struggles for years), and against the former director of the DAP (“Department of Penitentiary Administration”), Santi Consolo, one of the people responsible for the torture that tens of thousands of prisoners suffer on a daily basis.

The prosecutor Federico Manotti, already known for his repressive fury against many anarchist comrades, asked for a total sentence of half a century in prison: 17 years for Natascia and Robert and 18 years and 4 months for Beppe. The main charge is article 280, i.e. attack with terrorist purposes.

Natascia and Beppe have been in prison for two and a half years, having been transferred countless times from one end of the peninsula to the other.

It is evident how the state raises the bar of repression when it feels its untouchable cornerstones are threatened, intervening with requests for disproportionate penalties precisely to dissuade those who oppose it.

By means of prisons, CPRs (Centri di Permanenza Temporanea, “Temporary Detention Centres”, prisons for migrants), preventive measures such as special surveillance and fogli di via (the obligations not to enter certain municipalities or provinces) and decrees that increasingly marginalise minorities, the state attempts to instil its daily dose of terror in those who are considered inconvenient or non-aligned.

INSIDE PRISONS AND TEMPORARY DETENTION CENTRES, AS WELL AS OUTSIDE, ARE THE STATE AND ITS SERVANTS THAT CARRY OUT THE MASSACRES.

WE WILL NOT ALLOW THE DEMANDS OF THE PUBLIC PROSECUTOR’S OFFICE AND ITS PERSECUTORS TO BE CONFIRMED IN SILENCE.

WE CALL URGENTLY FOR A SOLIDARITY-BASED AND ANGRY PRESENCE.

IN SOLIDARITY AND COMPLICITY WITH NATASCIA, BEPPE AND ROBERT! IN ANY CASE NO REMORSE!

[For updates on Prometeo repressive operation and the ongoing trial: https://malacoda.noblogs.org/post/tag/operazione-prometeo/].