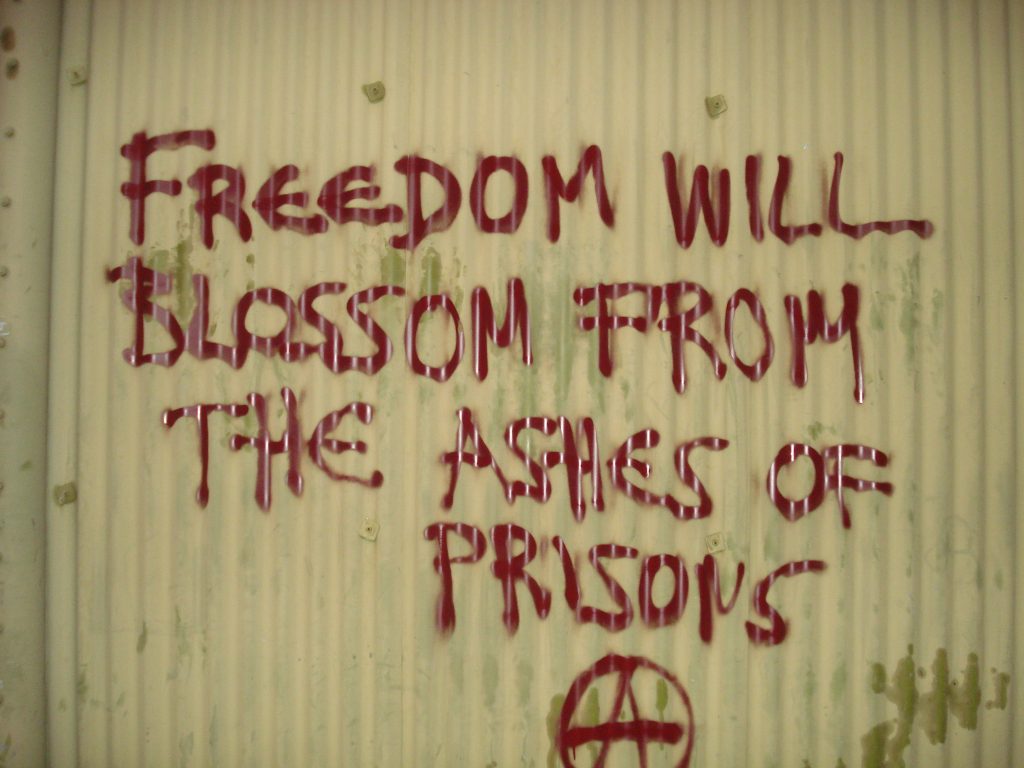 A quick update.
Without wasting a minute, the night after the last “Scintilla” preliminary hearing [June 16], they put me back on a plane to send me back to this shitty place, S. Maria Capua Vetere. I knew that the transfer to the north was only a temporary support, but I sincerely thought that I would have some more time, just as I naively hoped that they would at least read the various petitions submitted, by me and my lawyer, for reassignment to another prison.Since the day I was transferred here, three months ago, I have not been able to communicate decently with my lawyer: interviews have been reopened, so no video calls or phone calls at the request of the lawyer, phone calls are only one per month lasting 10 minutes, even for defendants and even for those who are 1,000 kilometres away from the trial site or from home.

If he is in the mood, the director of the prison can grant a second extraordinary one during the same month, but obviously, as this is a concession, he is under no obligation to do so, and in any case it is out of the question to exceed two monthly. So 20 minutes per month, in a small stuffy room, and at the appointed time and day, hoping that your lawyer will be in the office that day.

Twenty minutes a month, from a month and a half before the beginning of the trial [for the “Scintilla” operation, in Turin], until today, when the trial has substantially come to an end. There are two hearings left, before the closing speech of the prosecutor, two hearings in which there should have been reasoning about spontaneous statements, examination and cross-examination, but it seems that I will have to reason alone. On the face of it, it seems as if everything is being done to prevent a “dignified” defence… or rather, any defence at all… just in case the prosecution’s hyperbolic and morbidly house of cards starts to creak. Then it is much better for them if this possibility, that of defending themselves in court, is reduced to a minimum. I will not dwell here on how videoconferencing fits perfectly with this strategy, much has already been discussed about it (though perhaps not enough). It is known that to think badly you’re very often right. Of the twenty days I spent in Vigevano, fifteen were spent in solitary confinement and one in court, and another two days were spent travelling back and forth… in short, not even this was an opportunity to talk to the lawyer, since solitary confinement is not allowed for visitors. Needless to say, now I am back in quarantine.

So, let’s stop all the chit-chat: lucidly aware of the punitive (and preventive?) strategy that the DAP [“Department of Penitentiary Administration”] is putting in place towards me, and at the same time full of anger and disgust, I decided that – if I have no means to concretely interpose myself to their vindictive logics – I have at least the possibility to not let them do it with my collaboration. On hearing the news of my return to S. Maria Capua Vetere, at 6 p.m. on June 16, 2021, I immediately announced the start of an indefinite hunger strike. I know that these decisions are not competence of the administration of the prison, but I don’t intend to eat another bite in this shitty place. And it’s a pity, because the cage mates make some pizzas… but I’m really not hungry anymore!
To this day, no doctor has examined me or weighed me.
To the women around me it seems a bit silly, ‘na capata!, after all, there are people here who risk fine pena mai [life imprisonment with no possibility of release] and endure these conditions… but this too is another matter.
I know that some of you have never stopped thinking about isolation and dispersion… I’m sorry I’m not able to give you new hints or “innovative” ideas, but in this moment, in which I decided very suddenly to undertake this new challenge, I couldn’t think of anything better than using my body again, by fasting.

I wrote these two lines on the spur of the moment, in the wake of the same emotional wave of absolute disgust that invaded me when I saw these shitty walls again. I hope I haven’t been too confusing.

I embrace everyone very strongly!

PS(M) [pun between the PS of postscript and “PSM”, an acronym which in Italian corresponds to più sbirri morti, “more dead cops”]: A small note about the leaflet calling for the solidarity gathering of June 13 outside Vigevano prison. As much as one may feel bad in an AS3 [“High Security 3”] and the conditions may be afflictive, in respect of those who are really there, I would tread lightly in drawing parallels with 41 bis [the most restrictive prison regime in Italy]. It was really a bit out of place, in my opinion. I hope no one will be offended by this, however, it was great to hear from you inside the prison!

[Everything in square brackets is an addition of the translator. Text published by malacoda.noblogs.org].

Note: Natascia was arrested on May 21, 2019 along with Beppe and another comrade for “Prometeo” repressive operation, carried out by the ROS (“Special Operational Grouping”) of carabinieri. In December 2019 the third comrade was released from prison. The main charge is “attack with the purpose of terrorism”, as they are held responsible for sending three parcel bombs that arrived in June 2017 to prosecutors Rinaudo (prosecutor in several trials against the antagonist movement and anarchists) and Sparagna (prosecutor in the “Scripta Manent” anti-anarchist trial) and to Santi Consolo, at the time director of the DAP (“Department of Penitentiary Administration”) in Rome. Natascia and Beppe are currently in prison for the “Prometeo” operation, the trial of which is ongoing in Genoa. On May 10, Beppe was sentenced to five years of prison in the context of another investigation concerning an incendiary device placed against a post office in Genoa on June 8, 2016. Natascia is also a defendant (free, but under investigation) in the trial that followed the “Scintilla” operation of February 7, 2019, on charges of “subversive association”.