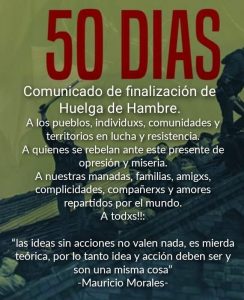 To peoples, individuals, communities and territories in struggle and resistance. To those who revolt in the face of this present of oppression and misery. To our families, our friends, our accomplices, compas and loved ones, throughout the world.

Ideas without actions are worthless, they’re just theoretical shit, so idea and action have to be and are one and the same.

We, the anarchists and subversive prisoners of the social war Mónica Caballero Sepúlveda, locked in the women’s prison of San Miguel, Marcelo Villarroel Sepúlveda, Juan Flores Riquelme and Joaquín García Chanks, in the High Security Prison (CAS), Francisco Solar Domínguez, in the Maximum Security Section and Pablo Bahamondes Ortiz, in module 2 of the Santiago 1 company-prison, as well as Juan Aliste Vega, in the CAS, who joins but is not on strike, for medical reasons, declare:

our decision to end our mobilization, a hunger strike (continuing to ingest liquids), after 50 days of intense agitation and action, in prisons and in the streets, in an urgent framework of control and social repression, to demand: Against life sentences! For the repeal of the amendments to Legislative Decree No. 321! And for the release of our comrade Marcelo Villarroel!

After all this active time, we are determined to put an end to this mobilization, with a heart full of joy, receiving with anarchic and subversive complicity, each of the gestures and initiatives carried out during the course of the mobilization.

From Sweden, Finland, Greece, Italy, Catalonia, Basque Country, Spain, Germany, Mexico, Guatemala, Costa Rica, Peru, Bolivia, Colombia, Brazil , Uruguay, Argentina, Chile and other territories where there is resistance and offensive, there have been initiatives of complicity and solidarity on the part of compas, which, in many ways, have acted by adhering to our struggles, in this time of confinement.

From the belly of the enemy, we show once again that we are far from being silent, that we are motivated and consistent and that we give continuity to a life of insubordination and rebellion, fighting from prison for the possibility of full individual and collective freedom, and always aiming at the destruction of the system of domination and all its control devices; this is and will be the essence of our lives and today, as hostages; we emphatically stress how proud we are to have taken, against all odds, the turbulent path of social war.

For this reason, we find in the passage to action, which involves collective action, important stages for the development of our individuality as a whole; we recognize our differences and, by overcoming them, we seek new common paths by which undermine domination, with sharp criticism of denial; today we feel more at ease and more united than ever, on a war footing, ready and willing to continue in this battle and in all those that will arise from our struggles. It is this method, this form, that we will momentarily set aside; the spark, the idea that prompted the use of this tool remains intact; intact and satisfied with its consistent action. Because we are able to establish real relationships of affinity, because we present ourselves with authenticity and decision, but there are no perfect formulas; it is the practice of life itself that unites us in the daily struggle against power and all its reality of oppression and misery.

We assume solid progress through the struggle, inside and outside prison, to make the existence of Decree No. 321 and the covert life imprisonment that it contains evident to the whole world, evidencing that we do not need institutional channels for it and that our amplified voices manage to be heard as the truth of prisoners who fight for total liberation, who also unmask the legal aberration represented by this decree-law, which enjoys the complicity of all the political class which affirms power.

We have also managed to articulate a struggle from different prisons and territories and from different anti-authoritarian revolutionary tendencies based on subversive solidarity that has known how to unite in common criteria and clearly this group of fellow prisoners, together with their accomplices and solidarity networks in different parts of the planet; they come out strengthened by contributing to the internationalist fraternity for the demolition of prisons and with it to the anti-prison struggle in each territory.

The status of permanent mobilization will continue to live, by a set of complicities and, certainly, by love in war.

In addition, we consider as substantial progress that goes in the direction of our demands:

The institution of a guarantee deposit in favor of Marcelo Villarroel, so that he can have access to his right to the request for parole.

The return of 665 days of difficulty reduction, for Juan Flores Riquelme.

activation of a politico-legal device for a profound question of the Decree-Law No. 321 and its harmful implications in state prisons, which requires that the INH [Instituto Nacional de Derechos Humanos, National Institute of Human Rights] clearly take a position.

the specific attention and intervention of other organizations as to the isolation system that is experienced in the high security section and the maximum security sections.

The non-application of punishments for those who participated in the hunger strike.

We know that our daily fight against imprisonment is full of difficulties, especially since we are in different prisons and in different legal and prison situations, but the essential has been the clear agreement of all our active universe of compas, who at no time has dropped their arms vis-à-vis our total liberation objective.

Thousands of lessons can be drawn from these 50 days. The essential thing is the strength of our convictions which, since the deepest horizontality, in affinity and mutual aid, has succeeded, through a plurality of forms of action, to pass our demands in many languages ​​and in many different territories, by deepening the anti-carceral struggle of our time.

It is here and now that we continue to call for perseverance and action, raising the level of the actions, trying to reinforce what unites us rather than what separates us, because the path we have drawn has been, is and will be that of a constant struggle, millimeter by millimeters, which requires the most ample experiences and wishes.

This irreducible struggle was a beautiful collective act that manages to unify the times and reflects the continuity of insurgent struggles, part of the multifaceted battles of social war.

This mobilization, which lasted a considerable amount of time, is the result of all our hate and rage, transformed into action, and no barrier can hinder our position, which represents a challenge against any form of domination; our condition as subversive and anarchist prisoners manifests itself in this practice that exceeds time and confinement.

Stir the waters, until they manage to move the stones.

On my side, I chose the fight. Living in the monotony of the moldy hours of mediocre people, resigned, well-to-do, is not to live, it is only to vegetate and transport, in an ongoing form, a mass of flesh and bone. It is necessary to offer to life the exquisite elevation of the arms and the spirit.

We consider this moment as a turning point in this universe of subversive and anarchist prisoners who have lived in prison for years, undergoing the cowardly revenge of the state.

Our choice has always been the struggle, in front of our brothers and sisters, without hiding anything, learning day after day from our losses and our mistakes and always returning to fight without ever resigning.

This period of mobilization, despite the total silence of power and its servile press, has been rich in different gestures of solidarity, for which we are grateful. We admire and respect them. To those who engage in the attack, to those who multiply and amplify the voice of the prisoners, to those who have supported us with a total attachment and loyalty, to each compa that resists, to our brother Juan Fernandez, who after decades of imprisonment and long sentences, today is imprisoned in the prison of Terni, in Italy, to his irreducible heart, to Pola Roupa and Nikos Maziotis goes our revolutionary fraternity, to our accomplices of all regions and territories goes our love in the war.

We think of the exploited and rebels in revolt in the Colombian region, today bruised by the Nazi-Fascist paramilitates of the state, and we are in solidarity with them.

We think of Punky Maury and we unite with the black memory of this comrade; we believe in his passage to the offensive, in his life, which is linked to the constant advance of the black hearts that will continue to explode the sewers of power; this is the always moving bet of the new urban guerrilla; it is resistance in the Wallmapu; it is the irreducible consciousness that there are neither masters nor slaves; it is the eternal complicities aimed at reaching justice; it is the vindictive lead against those who have not been punished; it’s a walk without a return looking for the right path. This is the best of each one of us in the service of our freedom. We are a set of complicities in struggle.

For the extension of active solidarity with the subversive and anarchist prisoners, prisoners of the revolt and for Mapuche liberation!

For the end of preventive detention as a tool for punishment!

We support the demand of the Mapuches to apply the ILO Convention No. 169 to the situation of their imprisoned brothers and sisters.

For the end of the sentences of military justice against Juan and Marcelo!

We continue to struggle for each demand, which motivated us in this emergency:

For the repeal of the modifications of the Decree-Law No. 321!

With the strength of our grandmother, present and eternal, Luisa Toledo!

Our anti-prison memory is going to Daniel Vielma, Ramiro Silva, and all our brothers and sisters who have struggled at the price of their lives.

With the determination for an eternal struggle!

As long as there is misery, there will be rebellion!

Death to the state and long live anarchy!

Neither guilty nor innocent, permanent insurrection!

Against all authority, self-defense and solidarity!

For the extension of solidarity with the prisoners of the social war, revolt and for Mapuche liberation!

For the repeal of Article 9 and Restoration of Art.1 of Decree-Law No. 321!

Freedom for Marcelo Villarroel and all subversive and anarchist prisoners, prisoners of the revolt and for Mapuche liberation!

Until the destruction of the last rampart of the prison society!

On the 50th day of hunger strike

Translated to english by .amwenglish