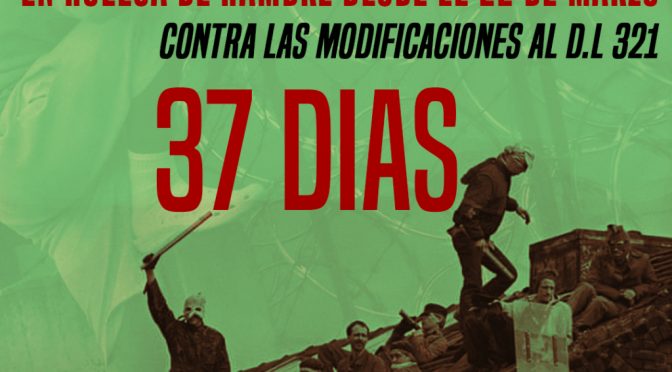 2nd Public Communiqué on the 32nd day of the Hunger Strike.

To the peoples, individuals, communities and territories in struggle and resistance.
To those who rebel against this present of oppression and misery.
To our herds, families, friends, complicities, comrades and loves around the world.

The anarchist prisoners and subversives of the social war Mónica Caballero Sepúlveda in the female prison of San Miguel, Marcelo Villarroel Sepúlveda, Juan Flores Riquelme and Joaquín García Chanks in the high security prison, Francisco Solar Domínguez in the Maximum Security Section and Pablo Bahamondes Ortiz in Module 2 of the prison company of Santiago 1 and Juan Aliste Vega in the Cas adhering but not on strike for medical reasons; we declare our total persistence in the decision to continue in this just mobilization in which we have already transit 31 days since 9 kidnapped comrades, in different periods in Chilean prisons, decided to begin this mobilization with characteristics of a liquid and indefinite hunger strike, thus activating a heartfelt demand in the prison world and, in the same way, uniting different generations of comrades as inescapable evidence of the continuity of the conflict with the State, the prison and capital in an undeniable context of Social War.

After 17 and 18 days of this journey with the body as a weapon of struggle, the comrades arrested in the context of permanent revolt and today prisoners in the prison company Santiago 1 module 3 Tomás, José and Gonzalo stopped the movement for „health reasons and lack of experience“ however those of us who continue to mobilize realize the clear will expressed by the comrades to take this necessary step of collective struggle and we greet them in the daily learning of living the millimetric resistance to the daily prison confinement.

On the other hand, in an indestructible bond of insurrectional complicity from the isolation of the high security prison of Terni, Italy, on April 12, the Spanish anarchist comrade Juan Sorroche Fernandez undertakes a hunger strike in solidarity with our demands, making tangible the beauty of that internationalist anti-authoritarian brotherhood.
We embrace his complicit gesture and make it our own, inviting him to travel these territories of struggle and resistance.

The path traced in this intense time of struggle is the crystallization of the word made action.

From the Chilean prisons our shouts of war once again travel the world making our subversive and anarchic call universal.

In the course of this new time of struggle, which is crossed by the repressive use of the pandemic all over the planet, and in spite of all the limitations and control, we have seen and accompanied each and every one of the multiple and beautiful gestures of solidarity action that are expressed at every moment in every place and where we find ourselves with brothers, sisters, comrades and allies activating in the same pulse of the conflict:
Words, flyers, sprayings, posters, texts, banners, flags, stickers, audios and live broadcasts and long-lasting radio broadcasting (cadenazos radiales), forums, meetings, barricades, conspiracy, fire and attack, solidarity, music, cycling and constant creativity to show solidarity are part of the many gestures and acts that unite us with all those who today accompany us along this path.

Likewise, the joint action of the different networks, coordinators, collectives and spaces organized in the present anti-prison struggle has allowed the correct and necessary amplification of the imprisoned voice and its emphasis, turning it into the urgencies that guide many of us today. Gathering and dusting off the rusty experiences of the political prison of bygone days, making visible the situation of all cases of today’s permanent revolt and giving a clear and unambiguous account of our subversive and anarchic autonomous resistance in the prisons of the Chilean democracy during the last 12 years in an uninterrupted manner.

Today it is understood with more force and clarity that political imprisonment in Chile never ceased to exist as a real and possible consequence within a subversive, rebellious and insurrectionary option of struggle. Likewise, the need to widen the active and complicit anti-prison fringe with those who struggle in this critical moment of state repression is evident.

From 1990 to the present day, political imprisonment continues to imprison those who rebel against the existing order and move from words to action through a variety of illegal practices. First there were the armed leftist groups, then autonomous and informal groups of action and anarchic personalities as well as the dignified Mapuche Resistance to reach the so-called prisoners of the Revolt for whom there have always been special laws, flawed trials, differentiated legal penitentiary and police journalistic treatments. A whole framework prepared to punish those who go on the offensive and hold them hostage under reason of state.

The notion of kidnapping becomes tangible in our cases when, through time and in a systematic way, the State, above its own legality, keeps us locked up with processes full of irregularities and with the manifest animosity of all its apparatus; altering our sentences, falsifying dates and documents, criminalizing our families and children, sustaining a special follow-up of punishment and public demonization seeking the extermination of our practices and histories of struggle, but they have not been able to do so.

„Freedom will flourish on the ruins of prisons“.

Our outcry today is loud and clear!!!

Simply put, there should be no regressive modification of the law regulating “ probation“.
And that this return to being an acquired right of the prisoner and not a benefit.

– Marcelo Villarroel to the street!

His legal situation does not stand up to analysis.
High sentences that at present amount to 46 years issued by the military prosecutors‘ offices for events that occurred 29 years ago. Alteration of the postulation times by the modification of DL 321, extending them for more than 16 years. He has lived more than 25 years of confinement in 3 periods. His legal and political situation crystallizes the elements of a state kidnapping, to whom is considered an enemy because of his clear and radical anti-authoritarian and anti-state position.

– For the extension of active solidarity with the subversive, anarchist, anarchist prisoners of the revolt and for the Mapuche liberation!
– For the end of preventive detention as a tool of punishment!
-We support the Mapuche demand for the application of ILO Convention 169 for the situation of the Peñi and Lamngen prisoners for struggle.
-For the end of the sentences of the military justice against Juan and Marcelo!

Here are expressed the highlights that guide us in the day to day of prison confinement.
Common concerns of comrades in struggle and resistance from the different prison labyrinths.

Likewise, simultaneously in different prisons of this territory, several hunger strikes with different demands and scopes are being carried out. We greet all those who have the decision to break with the dead time of confinement and activate from within in order to make their situations visible.

We also express our constant concern about the precariousness of life, the military-police use of the pandemic in a context of permanent repression and the generalized deterioration of the lives of the oppressed and exploited while the powerful get richer by suffocating all life for their huge profits. That is the reason for the rightness of overflow and protest, of organizing and fighting, of direct action for total liberation.

„I am a supporter of violence! I am absolutely in favor of violence. Otherwise they are going to take us out again and kill us again and lock us up again and make us disappear again“. Luisa Toledo Sepúlveda

In a deep connection with diverse territories in war and conflict for the liberation of the land and against capital.
Greeting all those who demonstrated on Saturday April 17 through propaganda, agitation and multiform action.

Strengthening the insurrectionary bond with all the brothers and sisters of the planet who with different idioms speak the same language of revolutionary internationalist fraternity.

With our dead in our memory!
With the decision of eternal struggle!

As long as there is misery there will be rebellion!
Death to the state and long live anarchy!
Weaving nets, multiplying complicity, the insurrectionary and subversive offensive advances!
Neither guilty nor innocent, permanent insurrection!
Against all authority: self-defense and solidarity!
For the extension of solidarity with the prisoners of the social war, of the revolt and the Mapuche liberation!
Let the prisons burst!

Marcelo Villarroel and all the subversive, anarchist, anarchist prisoners of the Mapuche revolt and liberation: to the street!

Until the last bastion of prison society is destroyed!
Until total liberation!